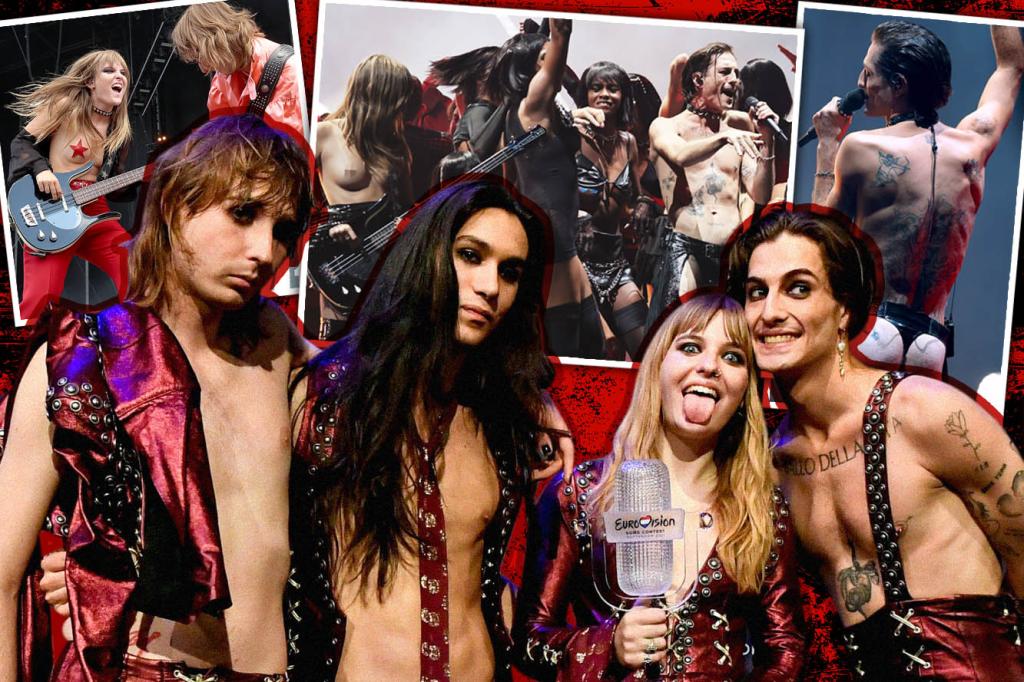 Måneskin had a nude awakening when they showed a little too much skin at the MTV Video Music Awards last month.

During the Italian rock band’s thumping performance of “Supermodel,” bassist Victoria De Angelis’ top fell off, causing her breast to be fully exposed and MTV censors to strangely cut away to empty seats for about 40 seconds.

Meanwhile, lead singer Damiano David bared his chest — as well as his buns — while rocking assless leather chaps. “I wasn’t wearing a shirt, so it’s a bit antiquated that showing a woman’s nipples should be any different from showing a man’s,” he told The Post.

Still, Måneskin is hoping there’s no repeat wardrobe malfunction when they hit the stage on the Great Lawn of Central Park at the annual Global Citizen Festival on Saturday. The international sensations will truly be putting the “global” into a heavyweight lineup that also includes Metallica, Mariah Carey, Mickey Guyton, Jonas Brothers and Charlie Puth.

It’s the latest high-profile appearance for the glam rockers, who have rocketed to worldwide fame since winning Eurovision with their tune “Zitti e buoni” in 2021. Indeed, Måneskin — which is rounded out by guitarist Thomas Raggi and drummer Ethan Torchio — is bringing rock back with bangers such as “I Wanna Be Your Slave,” which won them the Best Alternative award at the VMAs.

“Music goes in cycles, so it’s kind of normal for things to disappear for a bit and then come back stronger,” said David, 23. “We decided to go rock because it’s actually what we like to do. It’s very authentic and comes easy for us. It’s in our DNA.”

David, De Angelis and Raggi all met as high school students in Rome, with Torchio coming from nearby Frosinone, before forming Måneskin in 2016. They performed as street buskers in Rome before going on to finish second on “X Factor Italia” in 2017.

Her experience at the VMAs aside, De Angelis has had no issues being the only girl in the group. “I feel treated equally, as it should be,” she said. “I don’t see any difference because of my gender, so it’s all good. We’re like family.”

In fact, it was the bassist who came up with their band name. “We had to sign in in this music competition, but we didn’t have a name yet,” said De Angelis, 22. “So we didn’t have time to think of a proper name. So I just said some random words in Danish, because I’m half Danish, and we picked Måneskin, which means ‘moonlight,’ but [that] has nothing to do with anything.”

Still, the stars are definitely aligning for Måneskin these days. While in New York for Global Citizen Festival, they’re hoping to do some vintage shopping and maybe check out the San Gennaro Feast in Little Italy. And they already have a favorite Italian restaurant in the Big Apple: Emilio’s Ballato in Nolita.

And the Rome-based rockers will be practicing their English, which has been steadily improving. “Having the chance to spend a bit more time here in the US has helped,” said David.

In fact, it was Los Angeles — not Cindy, Naomi or Christy — that inspired their “Supermodel” single.

“We spent some months in LA, and it’s about this fake stardom system and lifestyle that a lot of people have [there],” said De Angelis.

“We just noticed and met a lot of people that really were concerned only about the way that they appeared or being in the right places, right parties, among celebrities or stuff like that. We found it ridiculous.”