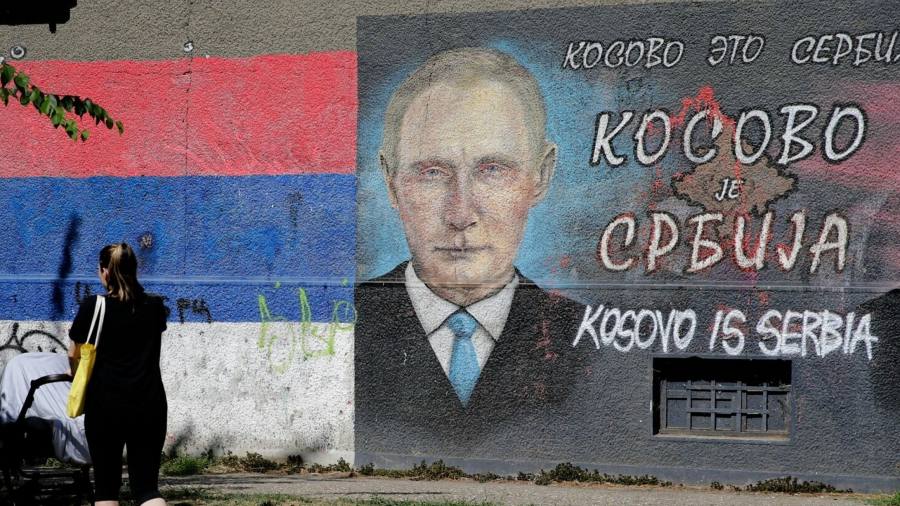 This article is an onsite version of our Europe Express newsletter. Sign up here to get the newsletter sent straight to your inbox every weekday and Saturday morning

Welcome back. In the news this week: tensions between Serbia and Kosovo. I’ll look at that and the troubled western Balkans as a whole. How serious are the threats to European stability? How dangerous is Russian meddling in the region? I’m at [email protected]

As Misha Glenny says, there’s no love lost between President Aleksandar Vučić of Serbia and Albin Kurti, Kosovo’s prime minister. It was good that Nato and the EU brought the two leaders to Brussels this week to spell out the need to dial down the tensions that flared up at the start of August.

However, Misha correctly observes that there is an underlying western neglect of the region. This risks playing into the hands of Moscow, as Dimitar Bechev, another leading Balkans specialist, points out.

In particular, whereas the rest of central and eastern Europe (but not Belarus, Moldova or Ukraine) joined the EU between 2004 and 2013, most Balkan states are hardly any closer to membership than when they received the promise of entry two decades ago.

This is exactly how some political leaders in western Europe want it, though they prefer not to say so out loud. And the EU door may be permanently closed to Balkan countries if French president Emmanuel Macron’s proposal for a “European political community” ever gets off the ground.

Still, the tendency to blame western governments for the region’s problems misses the point that an awful lot of these troubles are internally generated. What’s more, it often strikes me that, although political elites in the Balkans talk a good game about wanting to join the EU and embracing its standards of governance, some in practice have other concerns.

For example, corruption, organised crime, politicised judiciaries and weak independent media are common in the region. Do Balkan political and business elites really want the EU putting pressure on them to change their ways, as it has done with Poland and Hungary?

Drawing on the lessons of modern Balkan history — a history scarred by conflicts between and within young, fragile states — some of these elites think that the strict conditions attached to EU membership might threaten their grip on power. It might also reduce their countries’ freedom of manoeuvre, albeit limited, on the international stage.

Take Serbia. In a revealing comment, Petar Petković, the Serbian government’s point man for Kosovo issues, told the FT that Belgrade was pursuing an “independent national security policy, by co-operating in a balanced manner with both the east and the west”.

Do you hear echoes here of Josip Broz Tito, the late Yugoslav communist leader and kingpin of the non-aligned movement during the cold war? I think you do.

True, other Balkan states have less interest than Serbia in playing off the EU and US against Russia and China. Yet some have different, though equally slippery, fish to fry.

For instance, various Kosovo politicians, including Kurti, toy with the idea of pushing for the unification of their country — which has an ethnic Albanian majority and a Serb minority — with Albania. Such a “Greater Albania” might also include Albanian-populated areas of North Macedonia.

I cannot think of a better recipe for disaster in the Balkans — unless it’s the Bosnian Serb effort to wreck the Dayton peace settlement in Bosnia and Herzegovina, so that all Serbs can be in a Greater Serbian state.

Among the many reasons why changing borders in the Balkans is a terrible idea is that it would set a tasty precedent for Russia, which is set on doing exactly the same thing in Ukraine, having already annexed Crimea in 2014.

Wouldn’t Balkan leaders serve their people better by concentrating on the region’s chronic economic and social problems, aggravated by the pandemic and Russia’s attack on Ukraine? This World Bank chart produced by Brookings illustrates the challenges.

The Kosovo-Serbia dispute is one of many reasons why neither state will join the EU in the near future. People in Kosovo know this, which is why they are pressing for the apparently more achievable goal of visa-free entry into EU countries.

The European Commission favours this step, but some western European governments are opposed, citing concerns over the rule of law and organised crime.

With travel restrictions still in place, Kosovo’s authorities may lose enthusiasm for the legal, administrative and economic reforms needed to have any chance of EU membership.

Yet Kosovo will never join the EU as long as five of its 27 states — Cyprus, Greece, Romania, Slovakia and Spain — don’t recognise its independence from Serbia, proclaimed in 2008.

Their opposition stems from territorial and national disputes in each country: the Turkish de facto division of Cyprus, ethnic Hungarians in Romania and Slovakia, and the Catalan secessionist movement in Spain. For these five states, Kosovo’s separation from Serbia looks like a troublesome precedent.

A settlement between Serbia and Kosovo might address the problem. But as this week’s talks in Brussels suggested, such a breakthrough is still a long way off.

More on this topic

In our view, there is neither a legally and validly declared winner nor a president-elect — former premier Raila Odinga throws down a challenge to the narrow victory of William Ruto, deputy president, in Kenya’s August 9 election

Tony’s picks of the week

Britain after Brexit — Keep up to date with the latest developments as the UK economy adjusts to life outside the EU. Sign up here

Are you enjoying Europe Express? Sign up here to have it delivered straight to your inbox every workday at 7am CET and on Saturdays at noon CET. Do tell us what you think, we love to hear from you: [email protected]. Keep up with the latest European stories @FT Europe

Should Disney Get Rid of ESPN? The Debate Returns

Team Biden is using the IRS to attack the gig economy