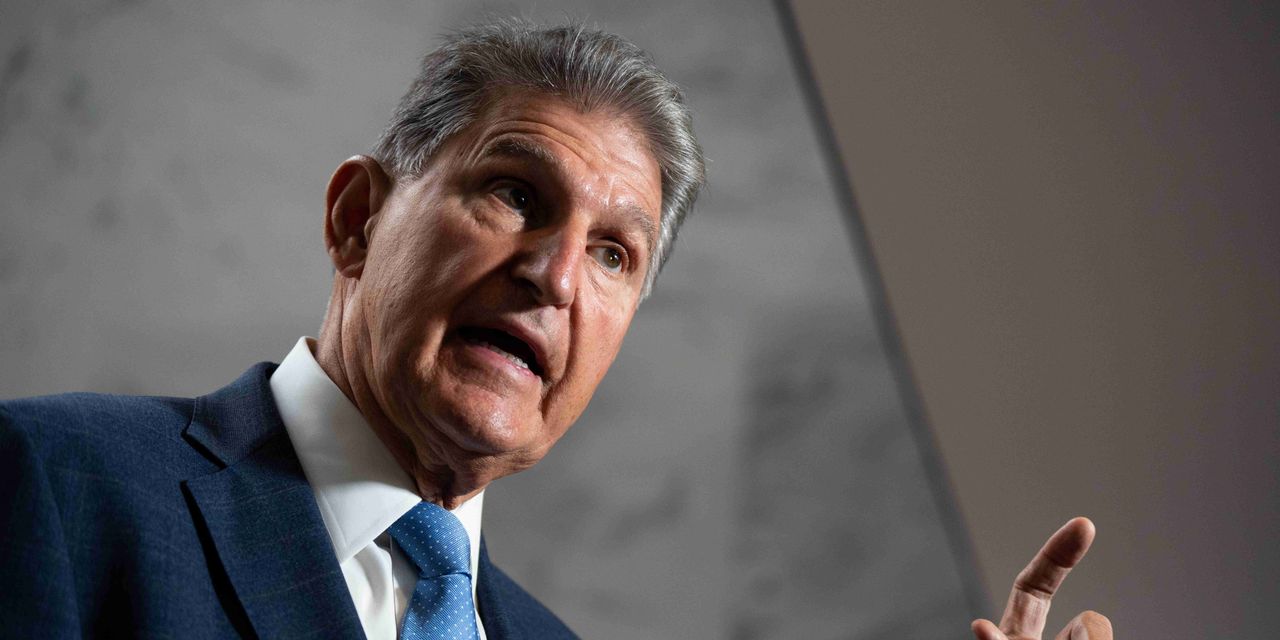 Manchin’s Deal Won’t Save the Democrats in the Midterms

and Sen. Joe Manchin (D., W.Va.) to resurrect the Build Back Better Bill.

The two senators slimmed down the legislative monstrosity and restyled it the Inflation Reduction Act. That nonsense label is worthy of a P.T. Barnum ad campaign. The Penn Wharton Budget Model predicts that the bill’s impact on inflation will be “statistically indistinguishable from zero.”

It isn’t clear this slimmer bill can pass, but already the Washington Post has trumpeted the hodgepodge of climate provisions, a three-year extension of ObamaCare subsidies, and price controls on some drugs provided through Medicare as having “the potential to change the narrative” of

Mr. Biden needs all the help he can get: His 38% approval rating in a late July Gallup Poll is down from the 40% average in the sixth quarter of his presidency, itself the lowest figure for any president since Gallup began routinely measuring in the 1950s.

So Democrats are pumping this latest Build Back Better incarnation big time, hoping it’ll be the life raft they need. A White House spokesman says it shows “Democrats have a plan to lower costs for middle class families.” Retiring Illinois Rep.

claims it gives her party “the Big MO,” while Virginia Rep.

proclaimed it will “change people’s lives.”

claim that the bill “will dramatically reduce costs for the average American that has to pay exorbitant prices for prescription drugs.” These price controls would apply only to expensive drugs with no generic competition offered through Medicare, starting with 10 such drugs in 2026. Consumers won’t feel any cost difference ahead of the midterms.

That’s a major problem for a bill claiming to ease the high prices fueling voter frustration. This $485 billion legislation won’t reduce inflation in the near term and could even make it slightly worse.

Like last year’s version of Build Back Better, the bill also has cost-hiding gimmicks. Take the ObamaCare subsidies that the American Rescue Plan extended for a year. The new bill would extend them for three more years, though Democrats almost certainly intend them to be permanent. This “temporary” extension allows Democrats to pretend this measure would cost only $65 billion, concealing the $155 billion the expansion would cost for the rest of the decade. Voters didn’t like this hocus-pocus when Democrats tried it last year, and now they’ve also seen what unnecessary spending does to inflation.

Democrats seem to know this strategy isn’t sufficient. Even while arguing that the bill’s passage will “make the Democratic closing argument stronger,”

president of NDN, a progressive think tank, admits that would only give “a point or two” to Democratic candidates. That’s simply not enough. It’s also already hard for Democratic candidates, especially in the House, to put daylight between themselves and Mr. Biden. This bill binds them tighter to the president and his dismal poll numbers.

But while the strategic picture could hardly be better for Republicans, they face serious tactical challenges that may allow Democrats to save seats, particularly in the Senate. While Republican Party committees and super PACs have a cash-on-hand advantage over their Democratic counterparts, Democrats have a better small-dollar fundraising machine, giving their candidates a fundraising advantage. Moreover, the most important factor in any race is candidate quality, and the GOP has nominated some doozies. Consider Tuesday’s primaries: While Republicans avoided a disaster in the Missouri Senate race, they nominated controversial figures for governor, senator and secretary of state in Arizona and put a swing House seat at risk in Michigan.

Every candidate, good or bad, is under pressure in the general election, which is coming up fast. Absentee voting starts in six weeks, Election Day is about three months off, and plenty of contests are up in the air. The Schumer-Manchin deal won’t save the Democrats. But unhinged GOP candidates might.

Mr. Rove helped organize the political-action committee American Crossroads and is author of “The Triumph of

Denial of responsibility! Elite News is an automatic aggregator of the all world’s media. In each content, the hyperlink to the primary source is specified. All trademarks belong to their rightful owners, all materials to their authors. If you are the owner of the content and do not want us to publish your materials, please contact us by email – [email protected]. The content will be deleted within 24 hours.
approval ratingbbbC&E Executive News FiltercommentariesCommentaries/OpinionsContent TypesDemocratsDomestic Politics
0
Share FacebookTwitterGoogle+ReddItWhatsAppPinterestEmail

Fadia’s Tree review — remarkable film about memory, migration and a mulberry in Palestine