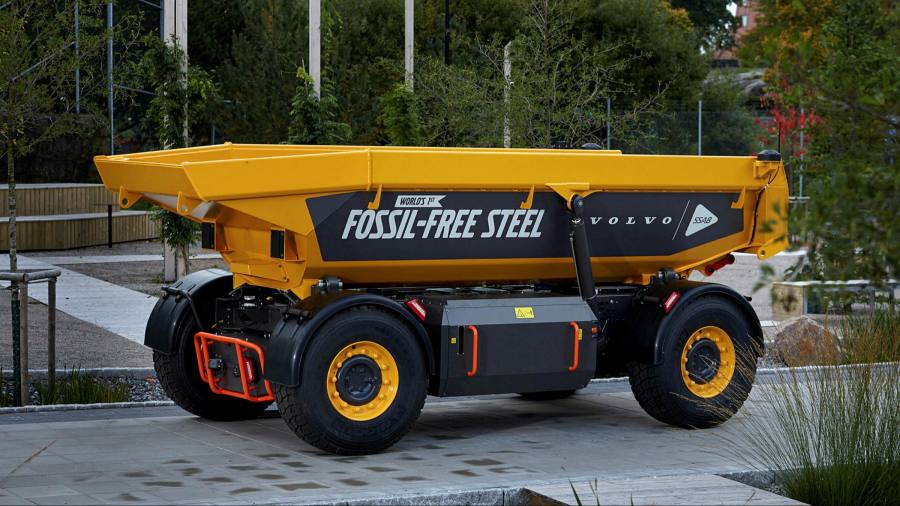 Industry steels itself for challenge of ‘net zero’ manufacturing

In October last year, Volvo Group unveiled the world’s first vehicle made using “green” steel. The autonomous electric truck weighed eight tonnes and was designed for use in quarries and mines.

It was the result of an industrial partnership between Swedish steelmaker SSAB, the state-owned electricity generator Vattenfall, and iron-ore miner LKAB. Their aim was to make the first steel free of fossil fuel by replacing the coking coal traditionally used in its manufacture with green hydrogen.

The partnership, dubbed “Hybrit”, is at the cutting-edge of European industry efforts to develop more energy-efficient, low-carbon manufacturing techniques.

Many initiatives were already under way before the coronavirus hit, but the pandemic has focused industrial leaders’ minds on the importance of reshaping and strengthening supply chains, and coping with longer-term challenges — in particular, climate change.

“It is no longer about the lowest cost producer, it is about resilience in your supply chain,” says Stephen Phipson, chief executive of British trade body, Make UK.

Manufacturing executives in the UK, he points out, are re-evaluating ‘just-in-time’ manufacturing processes and how much inventory to hold in future to ensure greater resilience. The importance of skills has also moved up the agenda, especially as companies battle to attract and maintain workers after the pandemic, which has left many short of staff.

But business leaders caution that wholesale transformation will not happen overnight.

A survey by McKinsey last November underlined the challenges. In a previous survey, in May 2020, most companies stated that they planned to pursue several paths to improve supply-chain resilience, including diversifying supply bases. But, in practice, by the end of 2021, most had mainly increased their inventories.

The more recent survey found that 61 per cent of companies had increased inventory of critical products and 55 per cent had taken action to ensure they had at least two sources of raw materials. Only 11 per cent had “nearshored” production, to avoid the risks of disruption from geographically remote suppliers.

Duncan Johnston, UK manufacturing leader at Deloitte, says: “Changing things in manufacturing takes time. You can’t change what was a global supply chain into something that is more near-shored or UK-centric very quickly”.

Are you curious about the FT’s environmental sustainability commitments? Find out more about our science-based targets here

The same, he says, is true of sustainability ambitions. While companies have done some thinking about it, they have not yet “really embarked on the substantial journey that is needed to reduce carbon emissions in the UK economy”.

Manufacturers face several challenges along the way. Apart from reducing the emissions in their own processes, they need to consider those in their supply chain. They need to find new ways to power their activities and, in some cases, such as the automotive sector, completely re-engineer their products.

Heavy manufacturing industries, such as steel and cement, are among those at the forefront of efforts to decarbonise countries’ economies. Outside of power generation, the iron and steel sector is the largest industrial producer of carbon dioxide. It accounts for 7 per cent-9 per cent of all direct fossil fuel emissions, according to the World Steel Association.

To meet global climate and energy goals, the steel industry’s emissions must fall by at least half by the middle of the century, according to the International Energy Agency. Achieving such a reduction will require more than incremental improvements in the efficiency of traditional blast furnaces.

“We have come to a point where, in terms of efficiency improvement efforts, there is not much more room left,” says Martin Pei, chief technical officer at SSAB. “It is really breakthrough technology that we are looking at now.”

In the blast furnace process, companies use carbon to take oxygen from iron ore to get iron. SSAB will instead use clean hydrogen gas, produced in a facility called an electrolyser powered by Sweden’s abundant renewable electricity. The output will be a solid intermediate, called sponge iron, which goes into an electric arc furnace, where it is mixed with scrap and refined into steel.

SSAB has estimated that metal from its hydrogen-based process will, at least initially, be 20-30 per cent more expensive than conventional production. Pei, however, says that customers are keen and that demand for greener steel is growing as more and more companies commit to decarbonising their supply chains.

Policymakers will need to play their part, too, in helping manufacturers transition to a low-carbon economy. For Europe’s steel industry to switch en masse to hydrogen, for example, would require a massive expansion of renewable power. State support would be needed to fund the necessary investment in expanding power grids and other infrastructure to accommodate the transformation to low-carbon economies.

Hydrogen is a prime example. The EU and the UK have both published ambitious plans to develop a hydrogen economy but obstacles remain to making this a commercial reality.

For example, says Phipson, the UK has a “very small innovative sector on hydrogen . . . the challenge is to scale that up”. Britain, he adds, is very good on innovation and research funding but what is needed is “scale-up capital”.

As for funding sources, he says: “There is a big commitment from companies to use private capital but the government also needs to play its part.”

Energy is the world’s indispensable business and Energy Source is its newsletter. Every Tuesday and Thursday, direct to your inbox, Energy Source brings you essential news, forward-thinking analysis and insider intelligence. Sign up here.

Transforming the workforce to deal with this transition is another concern. Even before the pandemic, manufacturers were worried about the effects of an ageing workforce and how to attract younger talent with more digital skills.

“We don’t know any manufacturing business that has as much in the way of digital skills as they would like,” says Johnston.

Those worries have grown, with many employers emerging from the pandemic with even more unfilled jobs. Phipson wants to see more action from the government on this front, as well.

“[It] needs to get more ambitious about its skills,” he believes. At the moment, the skills shortage is a “drag on growth”.