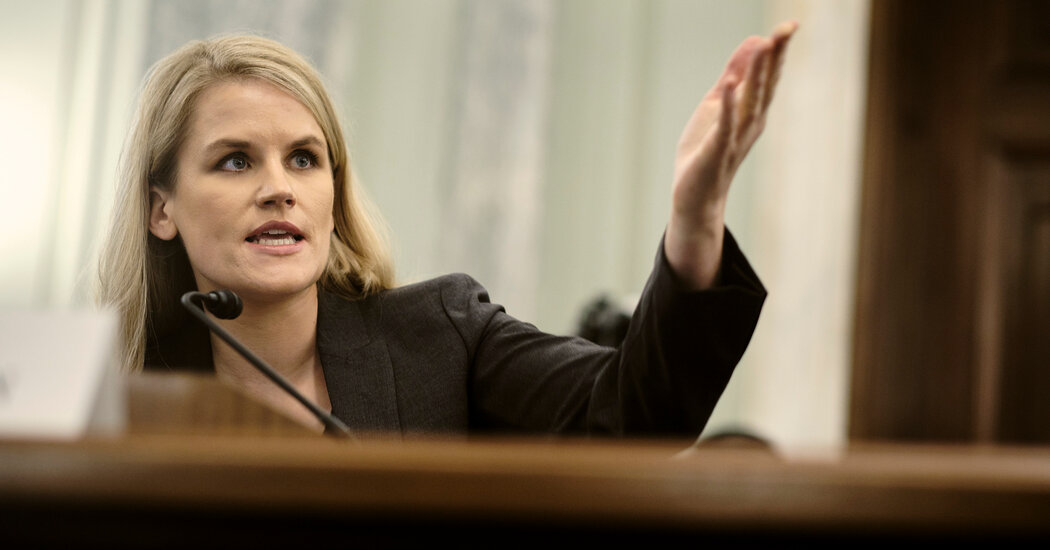 LONDON — The congressional testimony from the Facebook whistle-blower, Frances Haugen, has intensified calls in Europe for new regulations aimed at the social media company and other Silicon Valley giants, proposals considered by many to be among the most stringent and far-reaching in the world.

Ms. Haugen, a former Facebook product manager who testified Tuesday about the company’s internal workings and what she says are its harms to society, has spoken with top policymakers in Brussels, Britain and France about the need for tougher oversight. She followed her testimony in Washington with a call on Wednesday with Thierry Breton, the European commissioner in Brussels who is playing a leading role in drafting European Union legislation meant to curtail the power of the tech companies.

“She confirmed the importance and urgency of why we are pushing to rein in the big platforms,” Mr. Breton said in an interview after the call with Ms. Haugen. “There is now a strong will to finalize this as soon as possible.”

The reaction in Europe adds to Facebook’s mounting challenges. Ms. Haugen’s internal documents, first reported on by The Wall Street Journal last month, set off new bipartisan calls in Congress for laws aimed at social media platforms. On Monday, Facebook suffered a global outage, wiping out access to Facebook, Instagram and WhatsApp for several hours, a breakdown that demonstrated how essential the company’s products have become to daily life.

The European Union has for years been seen as the world’s leading tech industry regulator on issues including antitrust and data privacy, and its rules often serve as a model for other countries. Laws that could be adopted as early as next year would impose tougher rules for how Facebook and other internet companies police their platforms, and add stricter competition rules in an effort to diminish their dominance over the digital economy.

In her testimony, Ms. Haugen outlined several ideas that matched what European Union officials have debated the past year.

One of the proposals, the Digital Services Act, includes transparency requirements that Ms. Haugen called for during her testimony, requiring Facebook and other large tech platforms to disclose details to regulators and outside researchers about their services, algorithms and content moderation practices. The draft law could also force Facebook and other tech giants to conduct annual risk assessments in areas such as the spread of misinformation and hateful content.

Another E.U. proposal, the Digital Markets Act, would put new competition regulation in place for the biggest tech platforms, including restricting their ability to use their dominance with one product to gain an edge on rivals in another product category.

Key differences among European policymakers remain about how far the new laws should reach, particularly regulations on user-generated content that raise concerns about freedom of speech. But some top policymakers pointed to Ms. Haugen’s testimony as evidence to act aggressively.

Christel Schaldemose, a Danish member of the European Parliament who is playing a leading role in drafting the Digital Services Act, said she spoke with Ms. Haugen a couple of weeks ago.

“She asked me to insist on regulating the platforms,” Ms. Schaldemose said in an email. “And that is what I am working on. Especially transparency and accountability of the algorithms.”

Alexandra Geese, a lawmaker in the European Parliament from Germany who has also been in touch with Ms. Haugen, said her disclosures to lawmakers and journalists, along with the global outage this week, demonstrated Facebook’s unchecked power and influence.

On Wednesday, Ms. Haugen also had a video call with Vera Jourova, a European Commission vice president who has played a key role on E.U. data protection and misinformation policies. “This conversation confirmed to me that Europe’s direction on tech is the right one,” Ms. Jourova said on Twitter. “We need to provide rules and make platforms more accountable.”

In France, Ms. Haugen has spoken with Cédric O, the country’s secretary of state for digital transition and electronic communications.

Facebook said on Wednesday that it agreed new regulation was needed, though it has opposed some key areas of the E.U. proposals about meeting transparency requirements, conducting risk assessments and doing more to detect illegal content, goods and services.

“Every day, we make difficult decisions on where to draw lines between free expression and harmful speech, privacy, security and other issues,” Robin Koch, a Facebook spokesman, said in a statement. “But we should not be making these decisions on our own, which is why for years we’ve been advocating for updated regulations where ​democratically elected legislators set industry standards to which we can all adhere.”

Ms. Haugen is scheduled to travel to Europe in the coming weeks. She is slated to meet with European Union policymakers about new proposals to regulate social media, and to speak at an industry conference, Web Summit, that starts Nov. 1 in Portugal.

Ms. Haugen is also scheduled to testify before a British committee drafting a law that would create a new internet regulator and require Facebook and other internet companies to police harmful content online, particularly material targeted at young people, or risk fines and other penalties.

Damian Collins, the chairman of the British panel helping draft the law, said he had spoken with Ms. Haugen about the legislation.

“We’ve been talking about this for years and now is the time to act,” he said. “For years, Facebook has hidden behind a wall of secrecy, but now it’s starting to fall down. We have no faith Facebook can regulate itself. That is why the U.K. government is legislating to create an online safety regulator with legal powers to investigate and take action against big tech companies when they fail.”

Facebook and other Silicon Valley companies are putting significant resources into lobbying in Europe to shape the policies more to their liking, fearful the ideas will adopted elsewhere in the world.

In Brussels, the tech industry spends more than any other sector lobbying the European Union, above the drug, fossil fuels, finance, and chemicals industries, according to Corporate Europe Observatory, a watchdog group.

Beeban Kidron, who is helping draft Britain’s online harms legislation, said that European policymakers must act quickly, but that the most meaningful changes would come if new laws were adopted in the United States.

“Only when American parents say they have had enough and American lawmakers work together across the aisle will we be able to build the digital world children deserve,” said Ms. Kidron, chair of 5Rights foundation, a children’s rights organization.

Earth and the Moon Are Growing Apart

5 things to know before the stock market opens Friday, Oct. 8