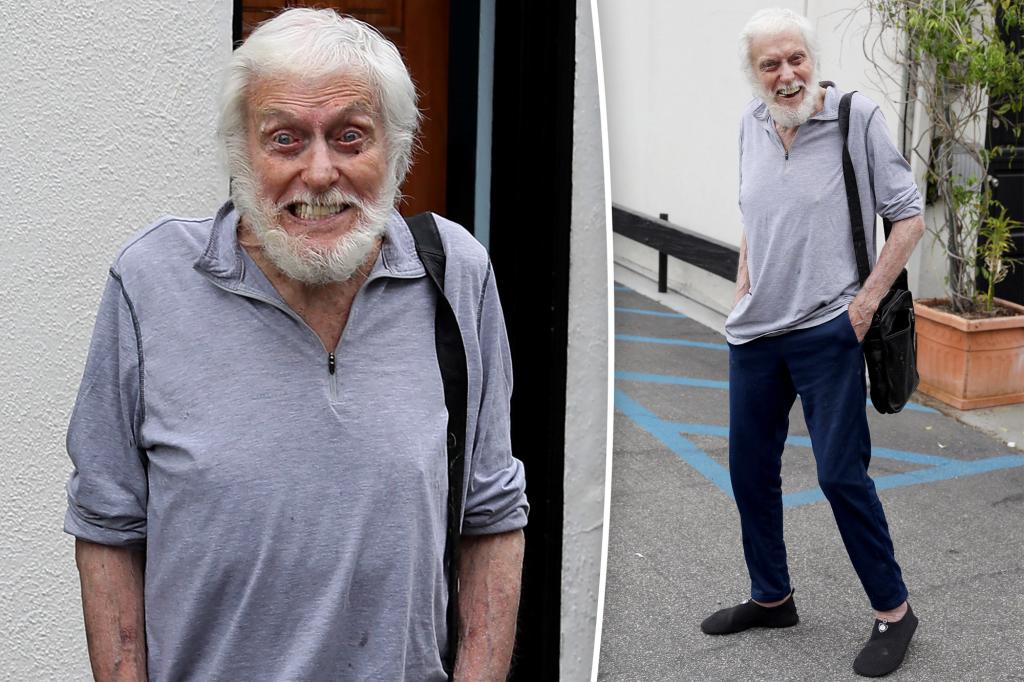 Dick Van Dyke, 96, looked happier than ever as he left lunch with friends in Malibu last Thursday, telling well-wishers that he’s “just glad to still be here.”

The “Chitty Chitty Bang Bang” legend was subsequently seen running errands after the lunch date, picking up a bottle of Neutrogena self-tanning spray from a local store.

The spritely star dressed casually for the outing, clad in a light gray sweater and navy pants. He added a pair of sensible slip-on shoes and a stylish leather shoulder bag.

Proving he’s still sharp as a tack, Van Dyke got behind the wheel of his Lexus and drove himself home afterward.

The “Mary Poppins” vet is occasionally seen around Malibu, grabbing lunch and hitting the gym with his wife, Arlene Silver, 50.

The couple celebrated their 10th wedding anniversary in February by going viral with a romantic Valentine’s Day video — and are rarely seen without one another.

The age-defying actor is famous for keeping fit and healthy in spite of his advancing age, telling Closer Weekly that he still hits the gym three times a week.

“I’ve always been an exerciser and still am … I get in the pool and exercise. At my age, they say to keep moving. Put me on solid ground and I’ll start tapping,” he declared in 2019.

Van Dyke revealed he does water aerobics, lifts weights and walks on a treadmill. He also credited his fit physique to “good genes.”

Meanwhile, the smitten star said that much-younger Silver also keeps him on his toes.

“I sometimes forget that we’re doing a great experiment here — 46 years’ difference. And we work at it to some extent,” he explained. “There’s got to be some understanding. Find out what old habits don’t work anymore. It takes some adjusting and fitting in, but that’s part of the fun of it.”

Silver spoke with Closer in a separate interview earlier this year, recalling the moment she first laid eyes on her now-husband.

“He said, ‘Hi, I’m Dick.’ The first thing I asked him was, ‘Weren’t you in “Mary Poppins”?’ We got along immediately as friends, so it didn’t feel like he was so much older than me,” she told the publication.

The devoted wife further cooed: “He is the most perfect human being. I’ve never met anyone so happy, so genuine, so amazing. He’s just like a happy pill.”

The pair were friends for several years before their relationship turned romantic.

Van Dyke said he was relieved his fans were supportive of the relationship: “I thought there would be an outcry about a gold digger marrying an old man, but no one ever took that attitude.”

In their popular anniversary video, the couple showed off their fun-loving relationship by dancing to a cover of the 1958 Doris Day song “Everybody Loves a Lover” performed by Silver’s band, Arlene & the Vantastix.