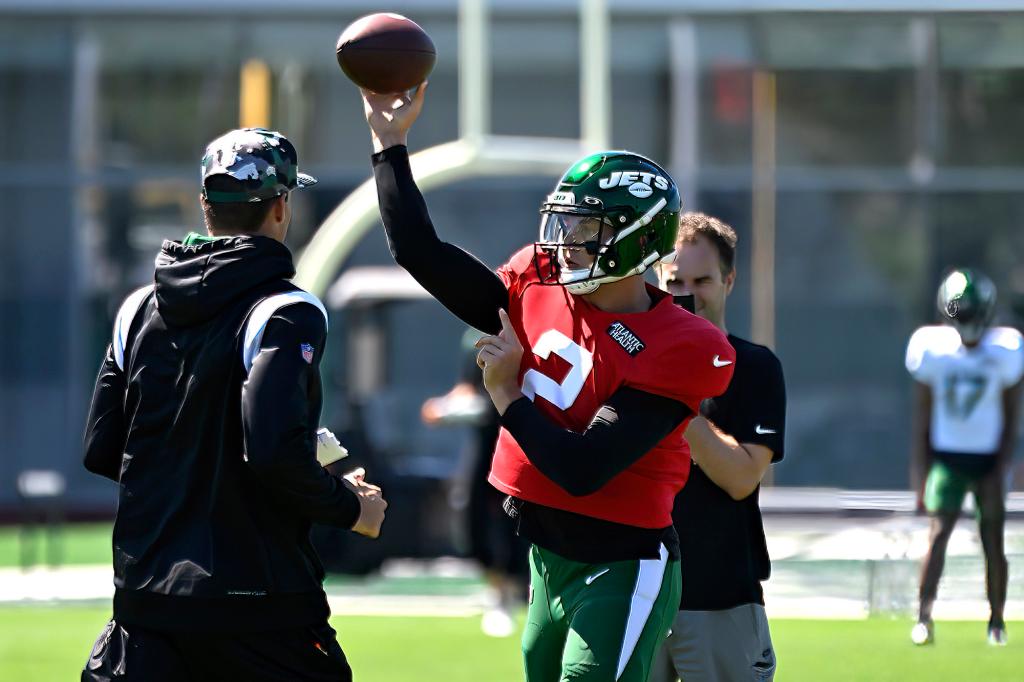 Zach Wilson celebrated his birthday with his best day of training camp so far.

The Jets quarterback turned 23 on Wednesday and went 8-for-8 in team drills with two touchdown passes during a red-zone period. Wilson looked more confident and made quicker decisions than any other day in camp so far.

Head coach Robert Saleh was particularly happy with Wilson’s performance in the red zone, which he called a “sticking point” for the second-year quarterback.

Wilson connected with Tyler Conklin on a rollout for a touchdown from the 2-yard line then followed that up with a touchdown pass across the middle to Elijah Moore from the 3.

“Zach’s been fine,” Saleh said. “I think where a lot of things sometimes gets skewed is down in the red zone, which is always the hardest part for a quarterback because things happen faster, especially a young man. So, the highlight today would be in the red zone, where I thought he operated fast, everything is faster down there.

“A lot of times he’s having a really nice day and then we get into the red zone and then he hits a lull, which you guys all yesterday moved the ball, get to the red zone. It’s the red zone period’s that have been the sticking point for him and today he was fast. He was deliberate, got rid of the ball, got to his second read on the one with Elijah Moore, so thought he did a really nice job.”

Wilson had his worst practice on Monday when the starting offense went three-and-out twice during a competition period with the defense. He rebounded Tuesday with a nice drive against the defense, but failed to get the ball in the end zone. On Wednesday, he was decisive and did not hold onto the ball.

Saleh gathered the team late in practice after he thought they started off slowly in a special teams period. The team takes a break in the middle of practice to simulate halftime. Saleh felt the team came out flat after that and stopped practice to remind them that games can be lost if teams start the second half slowly.

Rookie tight end Jeremy Ruckert and running back Tevin Coleman were activated off of the non-football injury list and may begin practicing.