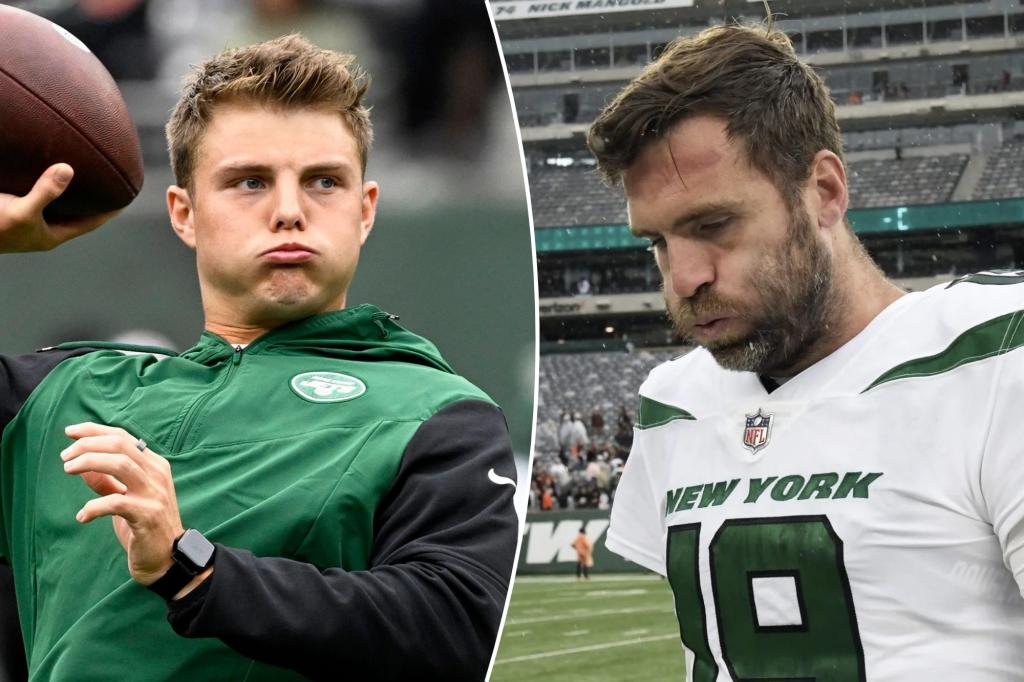 Well, at least the Jets don’t have a quarterback controversy to deal with this week.

So, they’ve got that going for them.

The Jets only wish they had such an issue to navigate because that would have meant they didn’t drop a sloppy 27-12 decision to the Bengals Sunday at MetLife Stadium to fall to 1-2.

Veteran backup Joe Flacco and the offense playing clean, efficient, winning football on Sunday would have dropped a good dilemma on the desk of head coach Robert Saleh Monday morning.

Starting quarterback Zach Wilson, the Jets’ second-year quarterback who was the second-overall pick in the 2021 draft, wears No. 2 on his uniform and has been rehabbing from his second significant injury, is expected to be cleared by doctors to play next week’s game against the Steelers in Pittsburgh.

Had Flacco and the offense played well enough to overcome the desperate Bengals, who entered the game with an 0-2 record dogged by whispers of a hangover from their Super Bowl runner-up, a strong argument could have been made for Saleh to stick with Flacco and give Wilson another week to strengthen his left knee.

Another week or more.

But that’s not an issue after Flacco failed to get the Jets into the end zone while completing 28 of 52 passes for 285 yards, a performance lowlighted by two interceptions and two lost fumbles.

The good news — if there is any — is that the Jets can now get on with what this season was supposed to be about in the first place: finding out how good Wilson can be with the elevated skill-position talent around him after a rookie season bereft of suitable playmakers.

So, beginning with Sunday in Pittsburgh, we resume regular programming for the Jets and Wilson, whom was among the worst quarterbacks in the league as a rookie — statistically speaking.

“We’ll evaluate it all tomorrow,’’ Saleh said after the game when asked specifically if Wilson has been medically cleared to play. “[We’re] expecting [he will be], but until the doctors say so … ’’

Asked to evaluate Flacco’s performance, Saleh said, “He did not get much protection. It’s not much different from Baltimore (the season-opening loss). I’m sure there are a lot of plays he wants back. I’m sure he’ll say himself [that] it wasn’t good enough.’’

Last Sunday, Flacco was basking in the euphoria of the Jets’ shocking, last-minute comeback victory over the Browns in Cleveland, where he engineered an improbable rally in the final 90 seconds. Flacco carried the game ball with him out of the visitor’s locker room and surely hoped there would be more glorious moments like this to come for him.

Flacco didn’t want to go there on Sunday inside the home losing locker room, when asked by The Post if he allowed himself to think about the difficult decision he might have given to Saleh with a win over the Bengals.

It’s only human nature for him to think that way, particularly for a player who cherishes playing as much as he does at age 37 and for a player who just seven days before had such a delicious taste of victory.

Asked if he’s resigned to Wilson returning as the starter this week, Flacco said, “I haven’t heard anything yet. I just keep my head down and keep working hard, and whatever role that is … I’ve understood what it is from the beginning. That’s the NFL, man; it’s week to week, and it’s 17 weeks. We have more opportunities.’’

How many more opportunities Flacco has isn’t up to him, and he knows that.

For the sake of the Jets and particularly general manager Joe Douglas, the man who stuck out his neck, reputation and possibly his future as the team’s GM when he chose Wilson with that second-overall draft pick, Flacco made his final start as a Jet on Sunday.

That, of course, would mean Wilson not only stays healthy the rest of the season but plays like the second-overall pick in the draft is supposed to play.