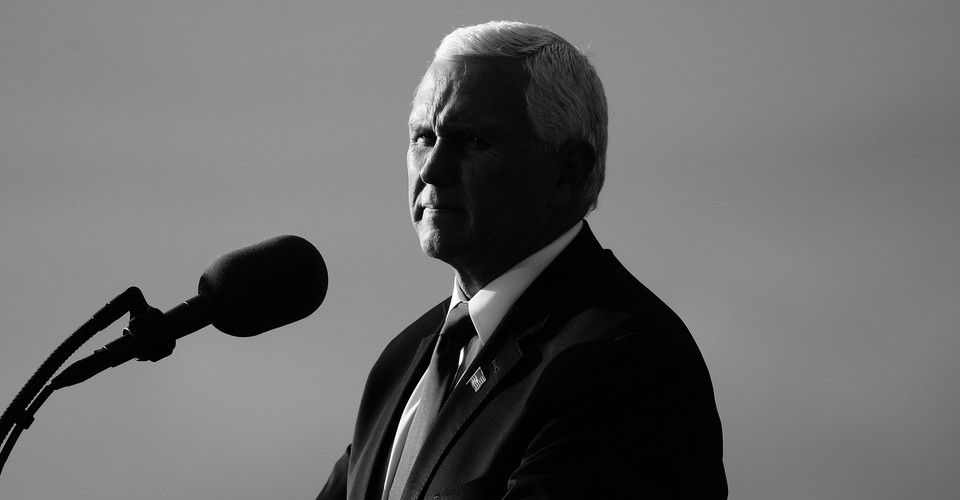 Would Pence Challenge Trump in 2024?

Mike Pence spent much of his vice presidency quietly catering to the whims of President Donald Trump. But on January 6, he broke with Trump by refusing to overturn the 2020 election results. And now, Pence is eyeing a presidential run of his own, even though his old boss hasn’t ruled out a 2024 campaign. Pence wouldn’t necessarily stay out of the race even if Trump jumps in.

“If you know the Pences, you know they’ll always try to discern where they’re being called to serve,” Marc Short, Pence’s former chief of staff told me. “And I don’t think that is dependent on who else is in or not in the race.”

A 2024 Pence campaign looks futile no matter the scenario. If Trump runs, he’ll rally the same MAGA zealots who refuse to believe he lost the last election. And if Trump opts out, Pence isn’t his natural successor; he may have spoiled any hope of inheriting the Republican base when he defied Trump on January 6. Scanning the Republican universe, it’s hard to detect a glimmer of a Pence-for-president movement of any sort. Which leaves GOP operatives asking a version of the same question: What in the world is Mike Pence thinking?

Sarah Longwell is an anti-Trump Republican strategist who has led dozens of focus groups since the 2020 election with hard-core Trump voters, reluctant Trump voters, and 2016 Trump voters who switched to Joe Biden last year. “Pence doesn’t do well with anybody,” she told me. People make faces when she mentions Pence’s name, faces that convey a collective nah. Or maybe meh, she said, thinking it over. But the impression they leave is obvious enough, she added: “Not interested.”

As of this point, Pence hasn’t decided whether to run, his advisers say. For now, he’s focused on helping Republicans win back congressional majorities in the 2022 midterm elections. But he’s also making the sorts of moves that typically precede a presidential bid. Since leaving office on January 20, he’s been showing up in states that hold early presidential contests: New Hampshire, South Carolina, and Iowa. Next month he’s set to return to New Hampshire for a Republican fundraising event. He’s writing a book and has started a podcast, American Freedom, that is a platform to reintroduce himself to voters after four years as Trump’s mostly subservient No. 2. Speaking in a flat baritone, the erstwhile talk-radio host mixes treacly odes to public service with sharp critiques of Biden’s record. One episode devoted to the 20th anniversary of the September 11 terrorist attacks opens with Pence denouncing “the failed leadership of the Biden administration” and closes with a vignette of him and other lawmakers singing “God Bless America” on the steps of the U.S. Capitol after the attacks.

Read: Republicans confront the consequences of their doomsday rhetoric.

“I will tell you, on that day and in the weeks and months that followed, there were no Republicans in Washington, D.C.,” Pence tells his listeners. “There were no Democrats in Washington, D.C. It was just Americans. Everybody rolled up their sleeves and did what needed to be done.” (Left unsaid is that he later abetted a president who politicized virtually every random bit of human experience, including wearing a mask and watching a football game, and who stirred up the insurrectionists before what was perhaps the most unsettling day on U.S. soil since 9/11.)

Former Vice President Dan Quayle has told me that he advised Pence back in 2012 that if he wanted to run for president, the Indiana governor’s office would be a better springboard than Congress. (Pence campaigned for the statehouse office that year and won.) A cold-eyed political calculus suggests that 2024 would be Pence’s best and maybe last real shot. He’ll be 65 by the next inauguration and fresher faces are emerging in Republican politics, notably Glenn Youngkin, the incoming Virginia governor who won a state that Biden had captured a year ago by 10 points. “Someone like Glenn Youngkin is the future,” Sarah Chamberlain, the president of the Republican Main Street Partnership, a group that promotes centrist policies, told me. “He would be a wonderful presidential candidate.”

Still, Pence has been mulling a presidential run for years, and such ambitions aren’t easily quashed. He remains in demand for GOP fundraising and campaign events, a means to cement alliances. Some Republicans see a rationale for Pence’s potential candidacy built on his conservative credentials.

Pence’s chances in the ’24 race brighten if Trump stays out. Right now, Trump is sounding like a candidate, though some people who have worked with him suspect he’ll ultimately stand down. “Trump won’t run,” John Kelly, who was Trump’s longest-serving chief of staff, told me. “He’ll continue talking about it; he may even declare, but he will not run. And the reason is he simply cannot be seen as a loser.” John Bolton, who was Trump’s former national security adviser, predicted much the same thing.

Whatever Trump’s future, for Pence to be competitive in a Republican presidential primary race, he’d need to assemble a coalition of fellow evangelical Christians, cultural conservatives, and a chunk of mainstream Republicans who appreciate that he upheld Biden’s victory. Pence’s apostasy on January 6 drew Trump’s ire, but his actions that day helped preserve the notion that voters pick the winners. Is anyone willing to give him credit? Perhaps, but it’s also a fair bet those who might do so still resent Pence for obliging Trump through years of chaos.

It’s hard not to see Pence as the author of his own misfortune. Listening to his podcast, one hears a politician who sounds like a throwback to a pre-Trump era. He criticizes the Biden administration for “one crisis after another” though the twice-impeached Trump presided over the lengthiest government shutdown in history and a pandemic. Pence tsk–tsks about graffiti scrawled on a federal building in Portland, Oregon, without mentioning that the insurrectionists spread feces through the halls of the U.S. Capitol.

Trump dismantled the Republican Party and remade it into a vehicle for his own promotion. Pence enabled that makeover. Yet he is now acting as if the old establishment party that gave rise to Bob Dole and Howard Baker is still intact and his to reclaim.

“He stood by while the party was actively changed by Trump, and now it’s not interested in politicians like him anymore,” Longwell said.

What, then, is Pence thinking? Maybe that if a former reality TV star can upend the laws of politics and become president, so can he.

Pence is “one of the most likeable people in either party,” Mick Mulvaney, another former Trump White House chief of staff, told me. And yet: “What is Mike Pence offering that 15 other people aren’t offering—other than having been vice president—which I’m not sure is very compelling these days.”

Denial of responsibility! Elite News is an automatic aggregator of the all world’s media. In each content, the hyperlink to the primary source is specified. All trademarks belong to their rightful owners, all materials to their authors. If you are the owner of the content and do not want us to publish your materials, please contact us by email – [email protected]. The content will be deleted within 24 hours.
20th anniversary of the Septemberanti-TrumpBob Dolecold-eyed political calculuselection resultserstwhile talk-radio host mixesfailed leadership of the Biden administrationfair bet
0
Share FacebookTwitterGoogle+ReddItWhatsAppPinterestEmail

Supreme Court to Consider Limits of Ruling on Oklahoma Tribes