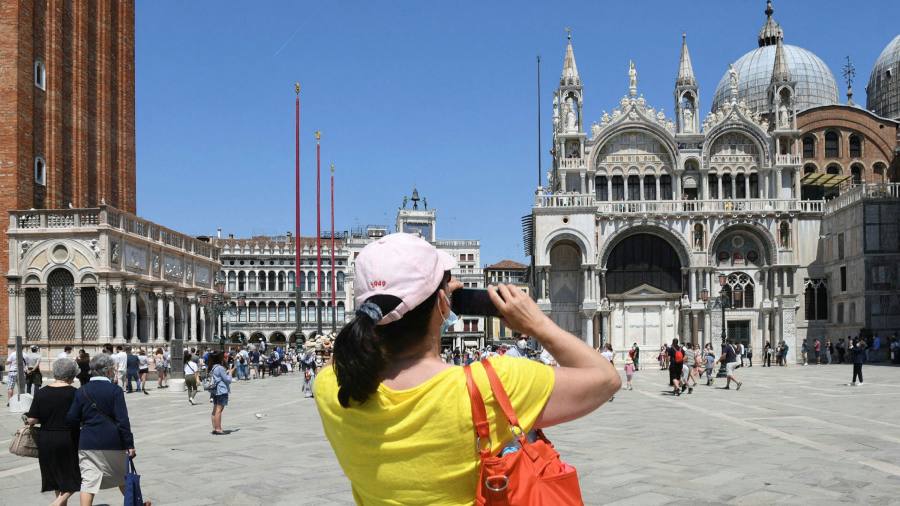 Why do we take so many forgettable holiday snaps?

Apple’s iCloud service has been nagging me to expand my online storage, for mine is down to a mere 100MB, mainly taken up by pictures on my iPhone. Thousands of them. The company must be of the firm belief that the past seven years of photos are worth preserving for posterity. I am not convinced. Purveyors of extra data services are not as clear-eyed as the photography critic.

Scrolling back, I wonder what I was doing. Family photos are fair enough, capturing the generations as they change. Events too. They only happen once. But what are all these photographs of buildings and landscapes from summer holidays, so forgettable I’d even forgotten I’d taken them?

I imagine that, for a moment, I was so overcome with wonder at the scene in front of me — a pretty canal bridge in Venice or the grand piazzas of Krakow and Siena — that I had to snap myself out of it by snapping it, the little camera click being the full stop to the moment before trotting off to the next place. There’s a danger one might actually develop a genuine and deep appreciation of a place by standing still — most unfashionable.

If Apple, Google Photos or Facebook really wanted to do me a service, they could flash up a notice on the screen to say: “This is a trite scene and a waste of data.” “Do you know how many hundreds of thousands have taken practically the same photo before?” they could inquire. “We know. They are all gathering dust on our servers. And, anyway, Geraldine from Newcastle took a much better one last week, when the clouds were all moody.”

No artist need fear the images gathered on my phone: they pose little threat to their occupation. If Baudelaire was worried, in 1859, when photography went mainstream, about whether the masses would mistake these silvered images for real art, I have helped to keep the distinction clear.

But if not art, are these pictures documents of something? And were they worth documenting when so many have looked at the subjects before? In the Renaissance, artists would paint the palaces of their overlords so they could be hung in other palaces, confirming possession — see the villas of the Medicis in Tuscany. Early European explorers and colonialists took artists on their ships to show off new territories to the king or queen and aristocratic sponsors.

Was my photograph of that Polish square a way of taking up some real estate in memory? The buildings clearly do not belong to me, but the experience of seeing them does. Except the memory is not mine. It has been devolved to a major online platform. And reviewing the image, I find it has slipped out of mine.

If not art, are these pictures documents of something? And were they worth documenting when so many have looked at the subjects before?

I suppose I could post one or two photographs on Instagram to let others know about the wonderful places I’ve been to and maybe provoke a little envy — until they are superseded by someone else’s holiday snaps. It would drop into the ever-moving stream of social media, becoming not so much photograph as a signal to friends, the passing utterance of “hey, I’m here.”

“Visual speaking”, full of ums and ahs and the banalities of real life, is how social media theorist Nathan Jurgenson puts it in his book The Social Photo. It is largely a blessed relief for Instagram followers, who need feign little more interest than a quick like — or in language, an uh-huh. The faster the developing image appears, the faster the upload time, the faster the half-life of the picture.

I may not be a regular on social media, but the same effect is evident in my own library. The pictures sink lower down the list and further from consciousness until now, when they become an irritant. It costs to have memories in this day and age. Not the one-off costs of developing film and buying triangle corners for the photo album, but an ongoing subscription to the outsourced memory.

The transitory moments of family and friends are harder to dismiss from my iCloud, but landscape and historic buildings seem a little ridiculous, like souvenirs instantly regretted. Isn’t the point about the Unesco world heritage site Siena that it has barely changed since the 15th century? Bar an act of God, it isn’t coming down any time soon. Haven’t those landscapes existed since before humans set their eyes upon them? They are more permanent than digital photo formats.

Then again, perhaps there’s a tech company out there who will have the last laugh. Like the rulers who collected images from their colonies, we mortals have been sent out to map and depict the world for the machine. It’s just possible that it’s not them doing me a service, but me performing one for them — helping provide social media with every possible angle in every shift of light of the Piazza del Campo, and amassing data for its digital twin.

Rather than them trying to charge me; shouldn’t I be charging them?