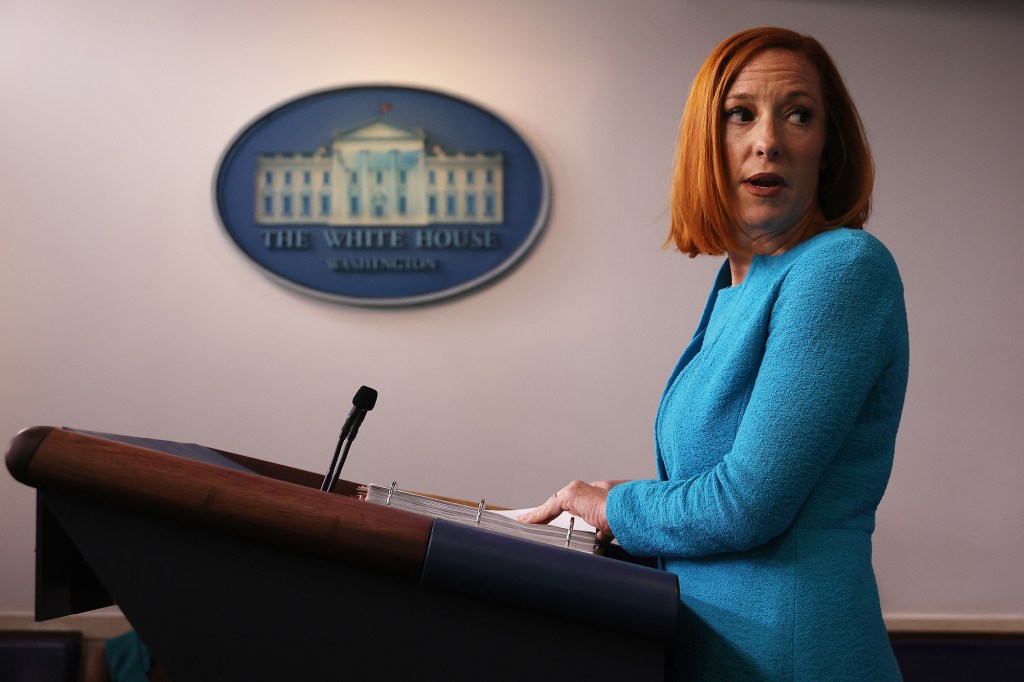 “Why are Florida leaders deciding they need to discriminate against kids who are members of the LGBTQI+ community?” Psaki asked reporters.

“What prompts them to do that? Is it meanness? Is it wanting to make kids have more difficult times in school?”

Psaki said President Biden is as horrified as she is about the legislation, which Democrats call the “Don’t Say Gay” bill.

“You have seen the president speak passionately about his view that a bill like this — a bill that would discriminate against families, against kids . . . It’s a form of bullying. It is horrific. I mean, the president has spoken to that.”

Indeed he has. Biden has damned the legislation as “hateful,” and sicced Education Department Secretary Miguel Cardona on Florida to threaten its funding.

“I want every member of the LGBTQI+ community — especially the kids who will be impacted by this hateful bill — to know that you are loved and accepted just as you are,” Biden tweeted. “I have your back.”

That’s super-empathetic of him. I’m sure the little kids appreciate his concern.

But the problem is that it’s all lie. A gold-plated fabrication that somehow has morphed into a full-blown moral panic.

The legislation that passed the Florida Senate Tuesday simply prevents schools from secretly propagandizing 4- to 9-year-olds on gender identity and sexual orientation and stops teachers from hiding information from parents.

This is a common-sense measure asserting a basic right most parents probably thought they already had and which only people of bad faith would try to strip away.

For children in kindergarten through Grade 3, what the bill does is “reinforce the fundamental right of parents to make decisions regarding the upbringing . . .

“Classroom instruction by school personnel or third parties on sexual orientation or gender identity may not occur in kindergarten through Grade 3 or in a manner that is not age-appropriate or developmentally appropriate for students in accordance with state standards.”

Why the president has a problem with that is anyone’s guess, but he is abusing his office by perpetuating gross disinformation.

Taking his cue, every idiot Democrat, woke corporate and Hollywood celebrity has maliciously characterized the bill as “anti-gay.”

It’s absurd. No one is banned from saying “gay.” The bill doesn’t target any sexuality.

Anyone who objects to the bill should be upfront about what they want for the nation’s smallest students.

Do they want classroom activists to tell 4-year-olds they can choose whether to be a boy or a girl, and give them explicit instruction on the different ways adults have sex, maybe with diagrams and sex toys?

This would have had you locked up in previous, saner times.

The hysteria over the Florida bill is designed to preemptively smear DeSantis and any conservative who tries to stop the systemic sexual grooming of the nation’s tiny tots. And it uses a particularly vile form of moral blackmail to suppress dissent, by pretending that children might commit suicide unless they are subjected to explicit sex education. Transportation Secretary Pete Buttigieg’s husband, Chasten, a former teacher, said the Florida bill would “kill kids.”

The propaganda did succeed in dislodging $5 million from Disney CEO Bob Chapek Wednesday. After weeks of vilification for not being sufficiently outraged, ­Chapek paid protection money to the activists.

He also phoned DeSantis, who refused to be pressured, and issued a statement: “The governor’s position has not changed . . . The same Florida parents who take their families to Disney also support parental rights in education because they do not want young children exposed to inappropriate content about sex and gender theory at school.”

There aren’t many politicians left with the cojones to fight the culture wars.

But DeSantis relishes the battle and is more than happy to push back against disingenuous media operatives.

“Does it say that in the bill?” he barked at a reporter asking about “Don’t Say Gay” on Monday.

“For who?” shot back DeSantis. “For Grades pre-K through 3. So 5-year-olds, 6-year-olds, 7-year-olds. And the idea that you wouldn’t be honest about that and tell people what it actually says is why people don’t trust people like you because you peddle false narratives.”

At this point, a huge round of spontaneous applause broke out for the governor at the Florida Strawberry Festival, where he had gone to designate strawberry shortcake as the official state dessert.

Everyone is sick of the lies. They will be taking their revenge in the midterm elections.

Homeless shelters are too filthy and dangerous for the homeless, as The Post’s exposé reported this week.

So what exactly did useless Bill de Blasio do with our $1 billion he gave to his wife to solve homelessness?

Homelessness activists want to waste money building new shelters in upscale residential neighborhoods, but that will just spread the misery to everyone.

It’s not the architecture’s fault that the shelters don’t work. Drug addiction, mental illness and the refusal to jail violent thugs is what makes life ­unbearable for the vulnerable homeless.

Travel to Portugal during Covid-19: What you need to know before you go