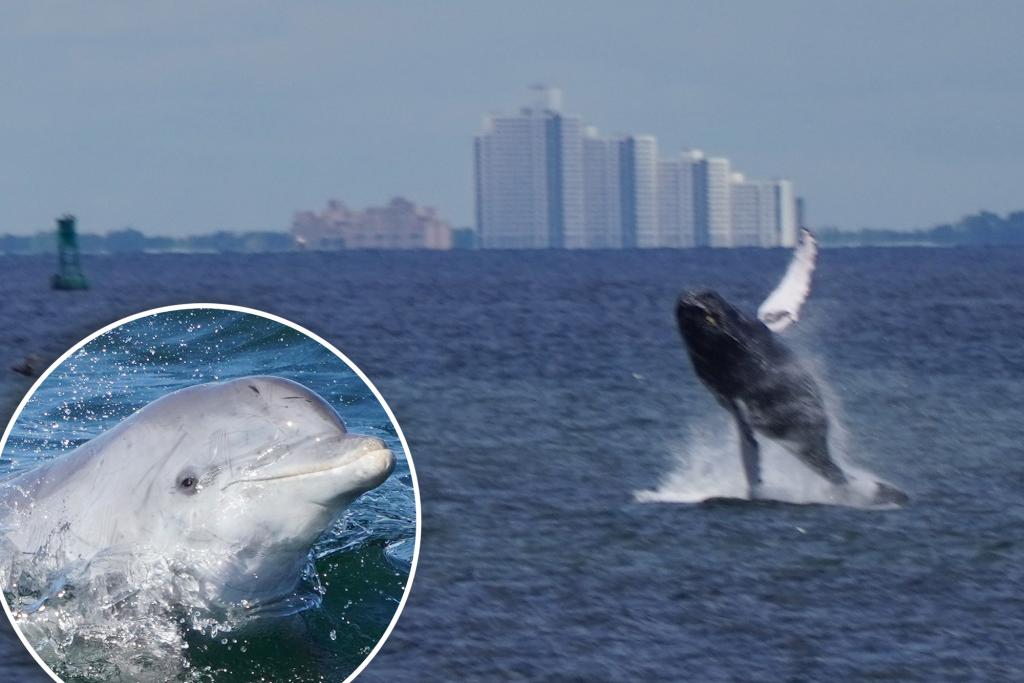 Here’s one increase in city traffic that won’t have you pounding a car hood: The waters of our archipelago city have been rife with sightings of marine life all summer long.

While sharks have gotten the most attention, pictures of whales, bottlenose dolphins, rays and other underwater urbanites have flooded social media, enchanting beachgoers and dramatically updating perceptions about dirty old New York.

In this case, sea-ing is believing. Experts say years of conservation efforts have resulted in some of the healthiest waters in generations, with booming fish populations, clearer ocean waves and more chances to interact with our urban aquarium.

“These are still the sightings of a lifetime for me,” said Howard Rosenbaum, director of the Ocean Giants Program for the Wildlife Conservation Society, which runs the New York Aquarium. “Off of New York, you can see bottlenose dolphins and humpback whales with the greatest skyline in the world in the backdrop.”

On Sunday, research organization Gotham Whale tweeted photos of the nine whales it spotted in one “amazing day” on the water, swimming in tandem and performing a rare triple breach of the surface. Ten years ago, Gotham Whale identified just five whales all summer; now, its total count of whales who visit the NYC area is up to more than 260.

“It never gets old, it’s always thrilling,” said Celia Ackerman, a naturalist with American Princess Cruises who captured the images. As a child growing up in Brooklyn, Ackerman couldn’t wait to move out of the city so she could study marine animals.

“I would have never imagined I could enjoy them here right in my backyard,” she said.

This year is actually the result of decades of successful water management, environmentalists said, citing the Clean Water Act, marine animal protection measures and local efforts to manage storm runoff and eliminate industry along the city’s coast to produce what the city calls the cleanest waters since the Civil War. Those waters nurture more fish down the food chain, which attracts the bigger appetites of whales and sharks.

“They know where good cuisine is. New York has always been famous for that,” said Paul Sieswerda, executive director of Gotham Whale.

Specifically, NYC has the menhaden fish to thank for the recent spate of marine life sightings. The fish — pronounced a little like “Manhattan” — is too oily to be eaten by humans, but other fish love it.

Ten years ago, a ship captain joked to Sieswerda that the Rockaways would be the new Cape Cod, a coast famous for whale sightings.

“He was very prescient in that remark,” Sieswerda said. “Every year we’re seeing more and more whales. The wildlife is just increasing considerably.”

The increased marine traffic could lead to some hard conversations about how we use our waterways in the near future, and how to observe the animals safely. But for now, the effect has been noticeable from the boats in New York Harbor to the surfing lineup in Rockaway Beach.

“What I see here is what I see in Puerto Rico, or in Panama,” said Lou Harris, a Rockaway Beach surf instructor who runs the Black Surfing Association.

When a student recently said he saw stingrays in the water, Harris thought he was joking.

“I’ve been here 16 years, I have never seen stingrays,” he said. “Five minutes later, there goes five right by me, darting like UFOs, it’s crazy.”