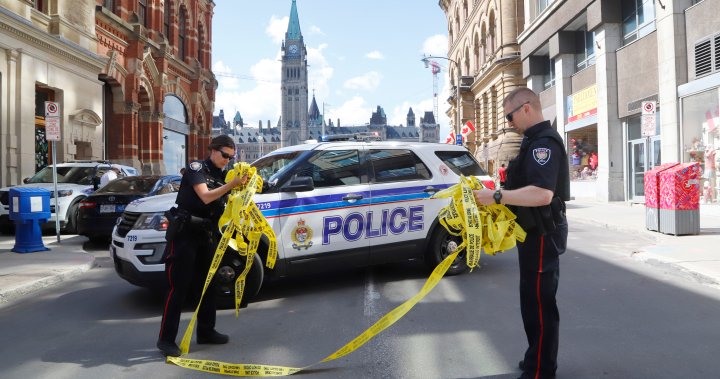 The two men arrested after a bogus Parliament Hill bomb threat on Saturday are asking police for answers — and a public apology.

Parminder Singh and Manveer Singh were organizers of a planned rally for Parliament Hill on Saturday to commemorate the June 1984 massacre of Sikhs in India. Their rally was relocated when a heavy police presence descended on the parliamentary precinct after the Canada Border Services Agency (CBSA) tipped off Ottawa police about a potential bomb threat.

Acting on what they thought at the time was a “credible threat” of explosives, Ottawa police detained the two men and searched their vehicles — one at the busy intersection of Slater and Metcalfe streets, the other near the Supreme Court where the rally had been relocated.

It was a “really dark day of my life” said Parminder Singh in an exclusive television interview with Global News.

“It certainly deeply hurt me. It hurt me personally, it hurt my community and my family and my friends,” he said on Tuesday.

“I mean, I couldn’t sleep since Saturday night. You know, it’s going through my mind: who’s behind this? Why?”

According to the Ottawa Police Service, a “detailed and specific threat about the potential use of explosives in the area of Parliament Hill” came in just after 11 a.m. Saturday. The OPS confirmed the tip came from a “federal agency,” which Global has previously reported was the CBSA. Sources said the tip included photographs and the licence plate numbers of the two men’s vehicles.

The CBSA, which originally received and passed along the bomb threat tip, has refused to confirm or deny its involvement in the investigation.

In a statement, a spokesperson for the CBSA said it “does not disclose details of specific targeting, enforcement or intelligence as it may render them ineffective.”

“The CBSA works regularly and closely with our domestic and international law enforcement partners in a joint effort to ensure border security, including intelligence and enforcement,” the agency said.

Sikh politics has been a point of tension between Prime Minister Justin Trudeau’s government and the Indian government of Narendra Modi, who has accused Canada of harbouring Sikh “extremists” and proponents of an independent Sikh state in the Punjab region of India and Pakistan, dubbed Khalistan.

Manveer Singh attended events during Trudeau’s much-criticized visit to India in 2018, but told Global News he was not permitted to travel on the prime minister’s plane with the rest of the delegation. He said he travelled to India on his own dime.

Manveer, who also goes by Manveer Singh Saini, caused a stir during the trip after photos surfaced suggesting he held pro-Khalistan and anti-Modi views.

“It’s my opinion. I was protesting against a man who killed many people,” Manveer told Global News in 2018, in reference to riots in the state of Gujarat in 2002. Modi was accused of turning a blind eye to the riots in his home state, which killed 2,000 people, mostly Muslims.

There is no indication that Saturday’s rally was meant to be anything but peaceful. What is clear is that after detaining the two men and searching their vehicles, Ottawa police said there was no threat to public safety.

The rally, initially planned for Parliament Hill, was relocated to the grounds outside of the Supreme Court buildings further down Wellington Street. According to Manveer Singh, shortly after the rally began, police asked him to step behind one of the rally’s banners.

“One of them said … ‘Are you Manveer Singh? I said, ‘yes.’ He said, ‘We have credible information there’s a bomb threat at the Parliament Hill,’” he said.

“I was shocked. (I asked) what are you talking about? … They said, ‘No, it’s serious, serious charges and we have to arrest you. So we don’t want to create a scene here in front of everybody, so it is good if you can come with us to the car and we will handcuff you in the car.’”

According to Parminder, 20 minutes after Manveer’s arrest, he got a call on his cell phone. “Is this Parminder?

“I said yes. And they’re saying, ‘This is the Ottawa police, that we want to meet you,’” Parminder said.

“And I was shocked. I mean, I said, ‘What? I mean, I can’t believe this … you got wrong information,’” Parminder recalled saying.

“They said, ‘Yeah, well, we have to arrest you because there’s a threat under your name.’”

Both men were taken to the Ottawa police station on Elgin Street and detained for further questioning. They said they were asked to remove their turbans, and Manveer said he was also asked to turn over his kirpan and kara bracelet.

“That’s where I was too upset, like, I couldn’t do that, you know? These are religious signs, we are connected with them emotionally,” he said in an interview.

“But I had no choice, because the allegation was too big. They could do anything if I’m not obeying them. So as they directed, I (did) that.”

After police searched the two vehicles and turned up nothing, the two men were released just after 4 p.m. Manveer said an Ottawa cop told him, “We are extremely sorry, we apologize. We had a terrorism hoax and you are the victim of that.”

“This is clearly someone targeting the rally, targeting our name, our reputation. So we need answers,” he said.

“Who is that person or organization or government? Who could do that?”

In a letter to the Ottawa Police Services Board, interim police chief Steve Bell said the police service is “very aware” of the impact of its investigation on both the individuals and the broader Sikh community.

“We have reached out to the leadership of Ottawa’s Sikh community and we will be meeting with them later this week to take feedback,” Bell said in the letter.

“Our intent is to work to explain our response and alleviate any doubts with respect to community support, and to provide reassurance that Ottawa Police is working to better understand and address the needs of our communities.”

“When the RCMP investigation is complete, we will fully review the incident and the feedback from the community to look at how we can improve our responses to similar incidents,” Bell wrote.

Speaking to reporters outside of the House of Commons Tuesday, Public Safety Minister Marco Mendicino agreed there ought to be an investigation into who called in the tip.

“I cannot underline enough that engaging in any kind of hoax for the purposes of misleading police, casting aspersions on a community, feeding into stereotypes, is wrong. It’s categorically wrong,” Mendicino said.

On Thursday, NDP Leader Jagmeet Singh suggested there is a double standard between how the police responded to a hoax bomb threat involving Sikh men and February’s convoy protests that saw downtown Ottawa shut down for much of the month.

“We saw people that legitimately ruined the lives of Ottawa residents, hurt people, harassed and threatened people, were in a lot of ways coddled by the police, and then we see two men peacefully raising concerns about legitimate human rights violations that occurred in their country of origin, and they are met with such severe police interaction, arrested, strip searched,” Singh told reporters in Ottawa

“There’s clearly something going on here that needs to be evaluated.”

Kate Middleton hosts roundtable with UK politicians to highlight early childhood development: ‘More we can do’