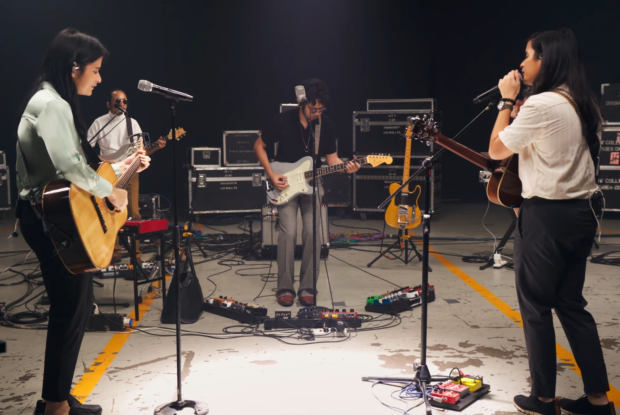 Ben&Ben has collaborated with Indonesian singer-songwriter Pamungkas for “Stand by You,” the English version of “Paninindigan Kita.”

The folk pop band released the official performance video for the song on its YouTube channel yesterday, Aug. 12. Ben&Ben and Pamungkas are both credited as writers of “Stand by You.”

“For what it’s worth; I will stand by you / The whole of me is here, now to love / Winter may come I’d still belong to you,” the group sings a tweaked version of the original lyrics, “Paninindigan kita oo / Mamahalin kitang buong buo / Kahit sa pagtanda ako’y sa’yo.”

Ben&Ben first teased its collaboration with Pamungkas last Aug. 5, by showing themselves in a studio together.

“Paninindigan Kita” was released by Ben&Ben last June. The song is about a person reassuring their special someone who is hesitant about taking a step forward in their relationship. It was followed up with the exact opposite track “Langyang Pag-ibig,” which is about someone lamenting a failed relationship.

Pamungkas held a concert in Mandaluyong City last week, Aug. 6, to promote his fourth album “Birdy.” This marks his first-ever performance in the Philippines.

The collaboration between Ben&Ben and Pamungkas comes weeks ahead of the band’s concert at CCP Open Grounds on Sept. 3. Ben&Ben is also set to travel to the United States and Canada for its first North American tour in September.  /ra

Trump Claims He Declassified All the Documents at Mar-a-Lago. Even if That’s True, it Probably Doesn’t Matter

Harvest on the horizon for Saskatchewan farmers