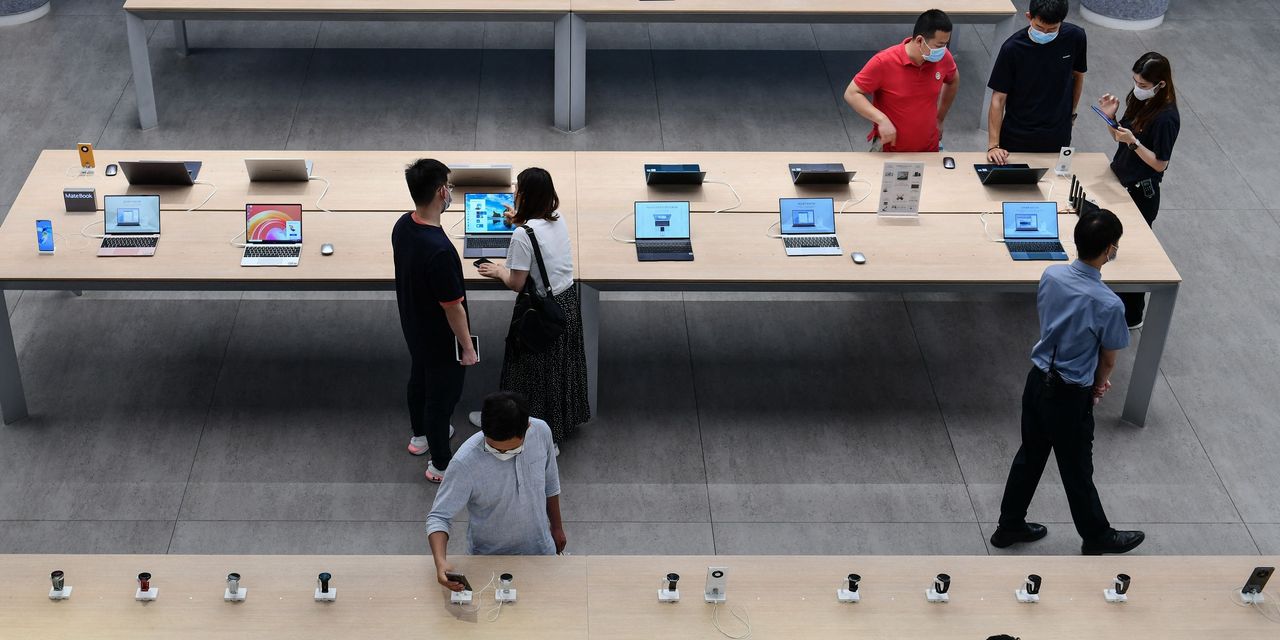 U.S. Set Out to Hobble China’s Huawei, and So It Has

HONG KONG—When she was detained in Canada nearly three years ago,

She arrived back home in late September to a very different company, one forced into retreat by American sanctions that have left it fighting for its future.

Huawei is in the midst of a deep slump. As recently as the start of last year, the world’s largest maker of telecommunications equipment was increasing market share in 5G rollouts and surging toward the top of the global smartphone market, shrugging off a year of export restrictions imposed by the Trump administration.

Now, its revenue has dropped for three straight quarters. The company has fallen to No. 9 in smartphone sales, with buyers evaporating from Europe to China. Its global telecom market share is shrinking as it loses out in key markets, a result of U.S. pressure designed to halt the spread of Huawei’s 5G technology plus concerns by some customers over its ability to remain technologically competitive.

Components are running scarce for lines of business such as mobile phones, the result of far-reaching rules enacted by Washington that curbed the ability of Huawei—which the U.S. has accused of stealing trade secrets and violating sanctions—to obtain parts and software made using American technology. Huawei has denied the U.S. allegations.

U.S. officials and members of Congress continue to call Huawei a national-security threat, concerned that the Chinese government could use the privately held company’s gear, embedded in telecom networks world-wide, to spy or disrupt communications.

Huawei has repeatedly denied that it poses a security threat and has said the U.S.’s actions are unjustified. The company has beefed up its lobbying and public-relations budgets in the U.S. in an effort to get Washington to reconsider, but the U.S. hasn’t given the company a clear pathway to having the sanctions lifted.

The restrictions imposed by the U.S. have choked off Huawei’s access to chips from suppliers even outside the U.S., prompting the Chinese company to sell its budget phone unit and to forecast up to $40 billion in lost smartphone revenue this year. It relied on China for two-thirds of its revenue last year, compared with half in 2017.

Washington’s campaign has used some of the most destructive tools in its arsenal, and they have succeeded, forcing Huawei to experiment with new business lines, cede overseas territory and foster a supply chain independent of the U.S., all while its stockpile of high-end chips diminishes. Rarely, if ever, has the U.S. directly taken on such a big overseas company and had such an impact.

Huawei executives, who often refer to a battle for survival, are steering the company toward electric vehicles, software and coal-mining technology. Many of the efforts remain nascent and make up a small fraction of revenue.

Huawei’s core business of selling telecommunications equipment is also starting to suffer. Huawei has said that in the first half of 2021, revenue from selling telecom carriers gear such as base stations and routers fell 14% from a year earlier to 136.9 billion yuan, about $21 billion.

Despite its troubles, Huawei generates profits each quarter and disclosed $55 billion in cash and short-term securities at the end of last year. Executives describe Huawei’s fat research and development budget as its insurance plan. Last year it said it spent $22 billion on R&D, more than

spent in its most recent fiscal year.

Huawei said it expects revenue from selling telecom equipment to ultimately show “moderate, but solid, growth” by the end of the year as China’s 5G rollout picks up steam. But it acknowledges that its new ventures are unlikely to make up for the revenue lost by its slumping smartphone sales anytime soon.

Ms. Meng arrived home Sept. 25 to a hero’s welcome as part of an apparent prisoner exchange between China and Canada. Her movements had been restricted while she contested extradition to the U.S. on charges she lied to one of its banks about Huawei’s alleged business in Iran.

The daughter of Huawei’s powerful founder and CEO

Ms. Meng pleaded not guilty but admitted to some wrongdoing in exchange for the U.S. deferring prosecution and dropping the charges against her next year, provided she doesn’t violate terms of the agreement.

While the deal that also freed two Canadians from Chinese prisons is hailed in China as a major victory for Huawei, there are few signs of the U.S. relaxing sanctions on the company. Biden administration officials said that Ms. Meng’s release didn’t indicate a softening of U.S. policy. Commerce Secretary

told news outlets that her department would continue efforts to block Huawei from getting advanced chips.

In June 2020, Huawei opened a sprawling retail store in an art deco building in Shanghai. Fans queued up outside, eager to view tables spread with smartwatches, tablets and smartphones inside.

Today, visitors encounter a different scene. On a weekday in August, three hybrid SUVs were on prominent display, while mobile phones were relegated to a side table, where a sales clerk cautioned that many weren’t in stock. Huawei is de-emphasizing longstanding business lines and throwing its weight behind novel ventures such as systems used in electric cars.

The vehicle on display was the Seres SF5, manufactured for Huawei by a small Chinese auto maker. Huawei designed the car’s electric-drive system and its electronics. It has also developed a more advanced vehicle with state-owned auto maker BAIC Automotive Group Co., for sale by the end of the year.

Huawei has said it will have cars on sale at 1,000 stores across China by the end of this year. Executives have set an ambitious target of selling 300,000 vehicles next year, which is almost double what

sold in China this year through August.

“By selling cars, Huawei can offset the impact of profit decline caused by U.S. restrictions on our phone business,” Huawei’s consumer-business chief,

It faces formidable competition in China’s crowded electric-vehicle industry. EV sales are booming, but hundreds of entrants have emerged. China’s main tech regulator in September encouraged consolidation, saying there were too many companies in the sector.

Other new Huawei ventures signal a transition to software from hardware that needs foreign supply chains.

Cut off by U.S. restrictions from most Google Android features, Huawei rolled out an in-house operating system called Harmony OS for smartphones this summer. Engineers had spent years developing it, bringing it first to gadgets such as smartwatches and speakers. Executives resisted deploying it to smartphones, but the loss of key functions on Huawei’s Android-powered phones forced their hand.

Executives hope the new system will be embraced by other mobile-phone and gadget vendors. So far, the main takers have been Chinese makers of internet-connected appliances such as Haier Group and

The users are limited almost entirely to China, according to

from Huawei’s app store, denting its appeal in Western markets. Chinese rivals including Xiaomi Corp., which has usurped Huawei’s place as the country’s top global smartphone seller, continue to run Android on their devices.

Other ventures unveiled this year include bringing artificial intelligence to pig farming and building 5G-connected cameras to monitor fish farms. In May, a Hong Kong-based beauty-products seller tapped Huawei to supply retail technologies such as data analytics and electronic payments.

“None of these efforts into these novel areas will be big enough to make up for the plummeting smartphone sales,” said

The company has found ways to stretch chip inventories,

a deputy chairman, said earlier this year. Some now appear to be running out: Huawei’s latest flagship smartphone, the P50, was launched in July without 5G connectivity. Huawei cited a lack of advanced chips.

“Due to U.S. restrictions over the past two years, we no longer seek to use the best components to make the best products,” Mr. Ren said in an August speech to employees. Instead, he said, Huawei was turning to “appropriate components to make high-quality products, which has significantly improved our profitability.”

Huawei has said its main business of selling telecom equipment such as base stations, routers and switches is still well supplied.

Huawei has been shut out of 5G rollouts in nine markets, including the U.K., Australia and Japan, following a U.S. campaign alleging security risks in the Chinese company’s networks, according to a March tally by the Council on Foreign Relations. Even more have enacted restrictions on the company’s technology.

After growing every year since 2007, Huawei’s telecom-equipment market share slipped to 29% during the first half of this year, from 31% in 2020, according to Dell’Oro Group.

In Malaysia, Huawei built about 50% of the country’s 4G networks. In late 2019, Malaysia’s then Prime Minister

said Malaysia wouldn’t follow other countries in blocking the Chinese company despite intensifying U.S. pressure. He lauded a carrier that had picked Huawei to help build out 5G.

complained that Huawei could have done the job for less.

Digital Nasional said Ericsson had outbid three other vendors and was about $170 million cheaper than the closest bid. A person close to Ericsson said company executives believe that while they won mostly for competitive reasons, there were also concerns in Malaysia about the sustainability of Huawei’s supply chain. A Huawei spokeswoman declined to comment on that.

In Mauritius, Vivacom African Networks Ltd. delivered a setback to Huawei this year when it chose a small American competitor to build networks in rural sub-Saharan Africa. Vivacom’s executive chairman,

said he was aware of Huawei’s reputation for building sturdy, inexpensive networks, but had concerns over the company’s future after it became the target of U.S. sanctions.

Mr. Hamweenda instead picked Parallel Wireless Inc., a company that has accepted U.S. government funding, to build 2G and 4G networks in rural Zambia and Malawi.

While Parallel’s lower cost was the main reason, “we asked ourselves, well, if we settled for a vendor like Huawei, we don’t know the extent of the ban on their equipment and the performance of their equipment tomorrow,” Mr. Hamweenda said. “At the end of the day, we are in business, and we wouldn’t want our investment to be affected by these politics.”

—Stu Woo in London and Chester Tay in Kuala Lumpur contributed to this article.

Six Rules That Will Define Our Second Pandemic Winter