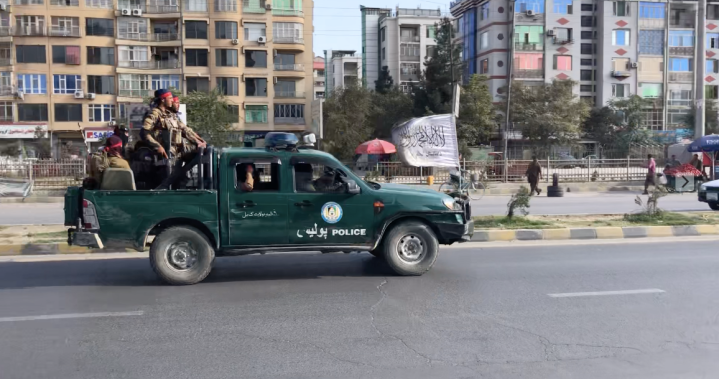 The Taliban is rebranding Kabul with its white flags, but what comes next has Afghans on edge – National

The five Taliban flags outside the terminal at Hamid Karzai International Airport serve notice to arriving passengers that Afghanistan is under new ownership.

They fly from the front fenders of the Taliban pickups that race Kabul’s streets with gunmen seated in the back.

Children hawk handheld versions outside the empty U.S. embassy compound. Schools have been ordered to display them.

Read more:
Inside the Kabul safe houses where Afghans wait to be evacuated to Canada

Kabul is being rebranded by the Taliban, who want to make sure that nobody can forget who’s in charge now. The country is no longer a republic, it’s the Islamic Emirate of Afghanistan.

But exactly what that means beyond a change of flag colours has many in Kabul on edge, and planning their escape to countries like Canada.

“We are following shariah law here,” Rahman Mansour said, sitting in his office at a Kabul police station, where he was the newly installed Taliban deputy commander.

He said the Taliban would enforce existing laws that were in line with shariah, but not those deemed to conflict with it.

A Taliban flag sat on his desk, along with his radios and two cell phones. Another hung from a stand on the floor, and a big one covered the wall. Yet another could be seen out the window behind him.

Among the matters police were dealing with that day was a grenade attack at a Taliban checkpoint. Asked about it, one of Mansour’s staff played a cell phone video of a man confessing to having been paid to do it.

But Mansour insisted security was better than under the previous government, which he blamed for failing to curb corruption, kidnappings and drugs — although the killings of close to 100 in recent bombings at Shia mosques in Kunduz and Kandahar suggested it was still a serious problem.

According to Mansour, the current version of the Taliban was different. It was more politically savvy and had a stronger military than last time around. But he said its underlying ideology remained the same: shariah.

“A Muslim will never change his ideology,” he added.

At another district police station, the Taliban in charge, Qari Skakir, said criminals were referred to the Islamic courts, which punished them according to shariah.

Asked if those punishments included public executions, which occurred during the Taliban’s last reign, he said, “This is a question that I cannot answer.”

As it blankets Kabul with its flags, the Taliban is cleansing the city of the symbols of the Afghanistan it wants everyone to forget.

At Massoud Circle, a monument to the anti-Taliban fighter Ahmad Shah Massoud, who was assassinated by Al Qaeda, portraits of the man it honoured have been ripped down.

On a recent afternoon, Taliban members posed for photos there alongside the Taliban flags that now ring the memorial. One said he had fought the U.S. forces, and would do it again if they returned.

He said he only wanted “freedom and peace,” and insisted nobody should fear the Taliban. “People are really good with us and we are good with them,” he said.

In the downtown market district, where vendors sell everything from pomegranates to used shoes, traffic was gridlocked. The drivers paid no attention to the traffic cop in the white cap.

Residents interviewed on the sidewalk gave a nod up to the Taliban, saying they had made the city safer, but the message changed once the TV camera was turned off.

“We have to say we’re happy,” one man explained.

Another spoke optimistically about the new Taliban government. But later, he confided he had worked for the Afghan military and asked for help fleeing the country.

A young man at Shahr-e Naw Park, now a tent city for Afghans who came to Kabul to escape fighting in other parts of the country, watched the Taliban official in charge of the area wander off before pulling a reporter aside to discuss his “situation.”

He said he used to work at the presidential palace. He’d heard Canada was taking 40,000 Afghan refugees and he wanted to know how to apply. A gunshot went off nearby.

“You see our situation,” he said.

Honking and speeding through traffic in trucks that ferry around fighters from the provinces, the Taliban in Kabul sometimes look like the very thing they claim to have defeated: occupiers.

At a Kabul restaurant, an armed Taliban entered with four youths and sat at the head of a table with his rifle cradled across his lap.

He played with his phone. The waiters looked nervous. They put a moaning Taliban song on the stereo. Better to appease the city’s new masters.

“We are planning to make Afghanistan like a fresh flower, rebuild it again according to the shariah rules,” another Taliban explained as he sat on a bench in Wazir Akbar Khan Park.

Once a popular place to fly kites, picnic in rose gardens and cool off in the pool, the hilltop retreat overlooking Kabul is now a Taliban post, and the big Afghan flag that once flew from the Martyr’s Memorial Monument is gone.

The thick-bearded fighter said he had participated in “jihad against the invaders,” and praised God for allowing the Taliban to return to power.

Those who have done “crimes in the past” would have to answer to the courts, he said, but otherwise nobody should be concerned about the Taliban.

“They don’t have to worry about it,” he said.

‘Don’t worry, no problem’ might as well be printed on the Taliban flag. It’s the theme the Taliban keep reciting as they seek recognition as the legitimate government of Afghanistan.

Meanwhile, the Taliban claims its bad image is the result of “media propaganda.”

In his office on the fourth floor of the Ministry of Information, the Taliban’s official spokesperson, Zabiullah Mujahid, sat with a plate of apples and told reporters they had seven minutes of his time.

He said the Taliban was “acting and governing according to shariah” to “build an Islamic government after fighting many years with invaders.”

“It is not an accurate definition of us if they are saying we are a terrorist regime,” he said, responding to Canada’s designation of the Taliban as a terrorist group.

“Twenty years proved that the Taliban fight for country and freedom,” he said. “Anyway, it’s a new season, Canada should behave responsibly.”

Reclining on floor pillows at a Kabul home, snacking on a bowl of walnuts, another Taliban official who did not want to be identified insisted things would be different this time.

The lights went out. There had been an explosion on the power grid, although it was unclear whether it was another bombing.

He said the Taliban wanted women to work — provided they were covered. He vowed that Al Qaeda would be dismantled, and that there would be no retaliation against Afghans who had worked for foreign militaries.

And then he asked whether he might qualify for refugee status in Canada.

Streaming wars: The fight for viewers

Italians go to the polls in closely watched election