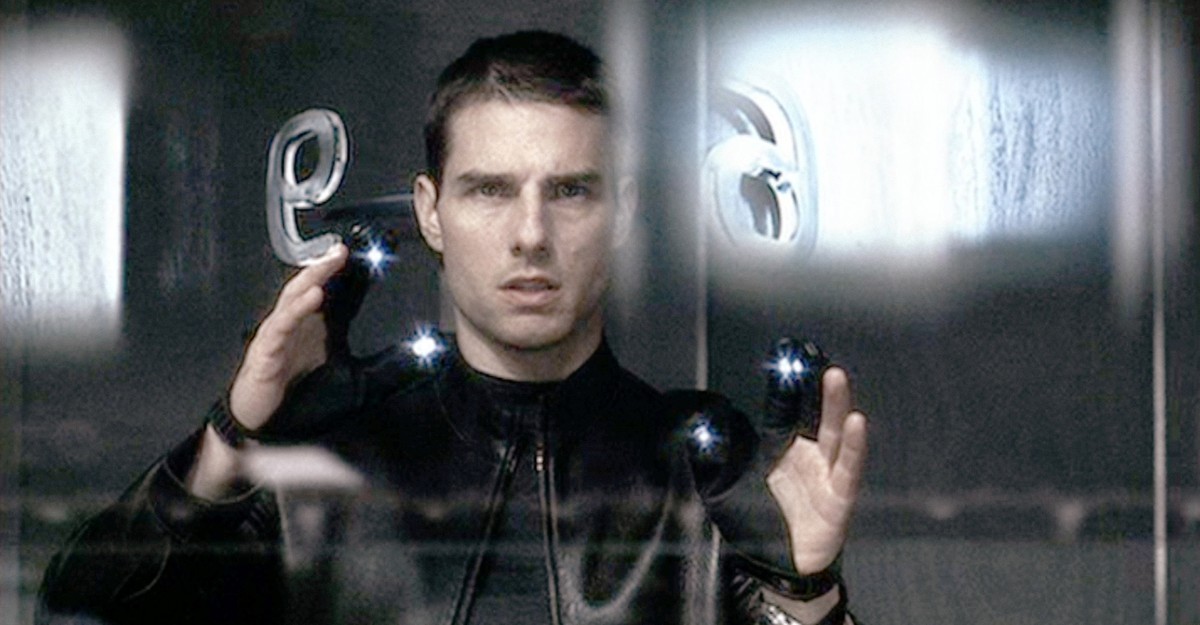 In Minority Report, when the detective John Anderton goes on the run in Washington, D.C., one of the first things he needs to do is swap out his eyes. The police of Steven Spielberg’s film, set in 2054, are not the only ones tracking people with eye-scanning machines mounted around the city. Public transit does so too, as does every business, and even all the billboards, which scream slogans such as “John Anderton! You could use a Guinness right about now!” as he walks by them.

That tracking system is the most mundanely frightening part of the film’s surveillance-state future, in which you might be arrested for a crime you haven’t yet committed. After a harrowing back-alley surgery, Anderton (played by Tom Cruise) reemerges into society with a new set of eyes. When he pops into a store, a holographic attendant greets him cheerfully: “Hello, Mr. Yakamoto! Welcome back to the Gap! How did those assorted tank tops work out for you?” The laugh line is much needed in a high-tension movie, but when I watched Minority Report recently, in a time when every social-media app I use seems to be listening to and anticipating my wants and desires, the gag sent a new chill up my spine.

When Minority Report hit theaters 20 years ago, it was marketed mainly as a long-awaited first-time collaboration between Hollywood’s biggest director and one of its biggest stars. Beyond that, 20th Century Fox and DreamWorks mostly promised an action-packed chase movie, pushing the punchy tagline “Everybody runs.” The film certainly delivers on that front, with some of the most inventive visual flourishes of Spielberg’s career. In one scene, a team of flying policemen smashes into an apartment where dinner’s being made, and one of their jet packs flash-fries some burger patties. In another, Anderton fights his would-be captors in an auto factory, dives into the assembly line, and then drives away in a newly built car—a set piece Alfred Hitchcock had once supposedly fantasized about including in North by Northwest.

And yet: Every bit of Spielbergian fun in Minority Report is laced with unspoken menace. Lexus designed the avant-garde cars, depicting what automobiles of tomorrow might actually look like. The sleek design is appealing, but the car is also a self-driving pod that offers its user no real control, changing direction to take Anderton straight to jail when he’s eventually discovered. A wide array of forward-thinking technology in the film was cooked up by experts whom Spielberg asked to envision life five decades hence, and in almost every case, advances in convenience come with insidious restrictions on personal freedom.

[Read: Minority Report and the drawbacks of foresight]

The central concept of Minority Report, based on a novella by Philip K. Dick, is that D.C.’s new “Precrime” division has eliminated murder in the city by tapping the brains of three psychics dubbed “precogs,” whose dreams of death are used to prevent killings before they happen. The notion is troubling: Police scrutiny has expanded into a guessed-at future, though the program is publicly presented as such a triumphant success that the city is lobbying to expand it nationally. “We are arresting individuals who have broken no law,” grouses Danny Witwer (Colin Farrell), the Department of Justice agent brought in to evaluate the system. But they will, he’s assured. Anderton is Precrime’s most devoted advocate—until the precogs predict that he’ll murder someone in the next 36 hours.

That’s when he goes on the run, resolute in the belief (like much of the quarry he’s chased) that he’s innocent. And then the superficially benevolent culture around him starts to close in. The viewer never sees any public opposition to Precrime, or to the brutal tactics employed by its agency; propagandistic commercials boasting about the end of murder are seemingly enough to silence any protest. One extraordinary sequence sees Anderton hiding out in an apartment building after his eye surgery. The cops storm in, but rather than simply batter down doors, they toss out insect-like drones named “Spyders” that roam the halls, scanning every inhabitant. In one unbroken shot, the camera pans from room to room as the Spyders breach each home, a sinister manifestation of a society without privacy.

Minority Report’s world building never feels particularly didactic—Spielberg’s persistent need to entertain his viewers means that even the most unsettling material is a delight to watch and rewatch. Still, the film was not quite a runaway success on the scale of his other releases around that time, such as The Lost World: Jurassic Park and Saving Private Ryan. It grossed only $132 million domestically. Summer theatergoers may have picked up on the movie’s gloomy tone: Spielberg’s regular cinematographer, Janusz Kamiński, gave it a washed-out color palette by overlighting scenes and then bleach-bypassing the film negative, similar to what he’d done for Saving Private Ryan. The aesthetic is pitch-perfect for the noir-y tale Spielberg is telling. But in the summer after September 11, 2001, the films that did best at the box office had a much poppier accent, including Sam Raimi’s Spider-Man and the breakout hit My Big Fat Greek Wedding.

The dark outlook is, however, of a piece with much of Spielberg’s oeuvre in the 2000s. In the years just before and after Minority Report, his output ranged from mercilessly sad to doggedly bittersweet. By 2005, he’d made two of his grimmest works and his most obvious responses to 9/11, War of the Worlds (which reunited him with Tom Cruise) and the acidic revenge film Munich. War of the Worlds depicts mass destruction (via alien invasion) with visceral terror, and Munich investigates the worthlessness and cruelty of government-sponsored vengeance after a national tragedy.

But Minority Report, though it was written and filmed before 9/11, might be Spielberg’s most prescient work of all. Tasked with predicting our near future, he imagined an America filled with dazzling inventions but rotting from the inside out, one in which the erosion of civil liberties is thinly veiled by chest-thumping braggadocio about technology’s power to solve every problem. Spielberg’s eye-scanning cameras and autocratic cops could easily be exchanged with the overreach of the PATRIOT Act, or the NSA listening in to casual conversations. The film’s warning is one the world is only beginning to heed. We may not have precogs dreaming of murders in police precincts, but so much beloved technology of today is just as effective at watching and constricting our lives.

Denial of responsibility! Elite News is an automatic aggregator of the all world’s media. In each content, the hyperlink to the primary source is specified. All trademarks belong to their rightful owners, all materials to their authors. If you are the owner of the content and do not want us to publish your materials, please contact us by email – [email protected]. The content will be deleted within 24 hours.
20th Century Foxacidic revenge film Munichalien invasionapartment buildingassembly lineauto factoryautocratic copsbox office
0
Share FacebookTwitterGoogle+ReddItWhatsAppPinterestEmail

Maxine Waters Tests Positive for COVID, Was Exposed at Summit of the Americas