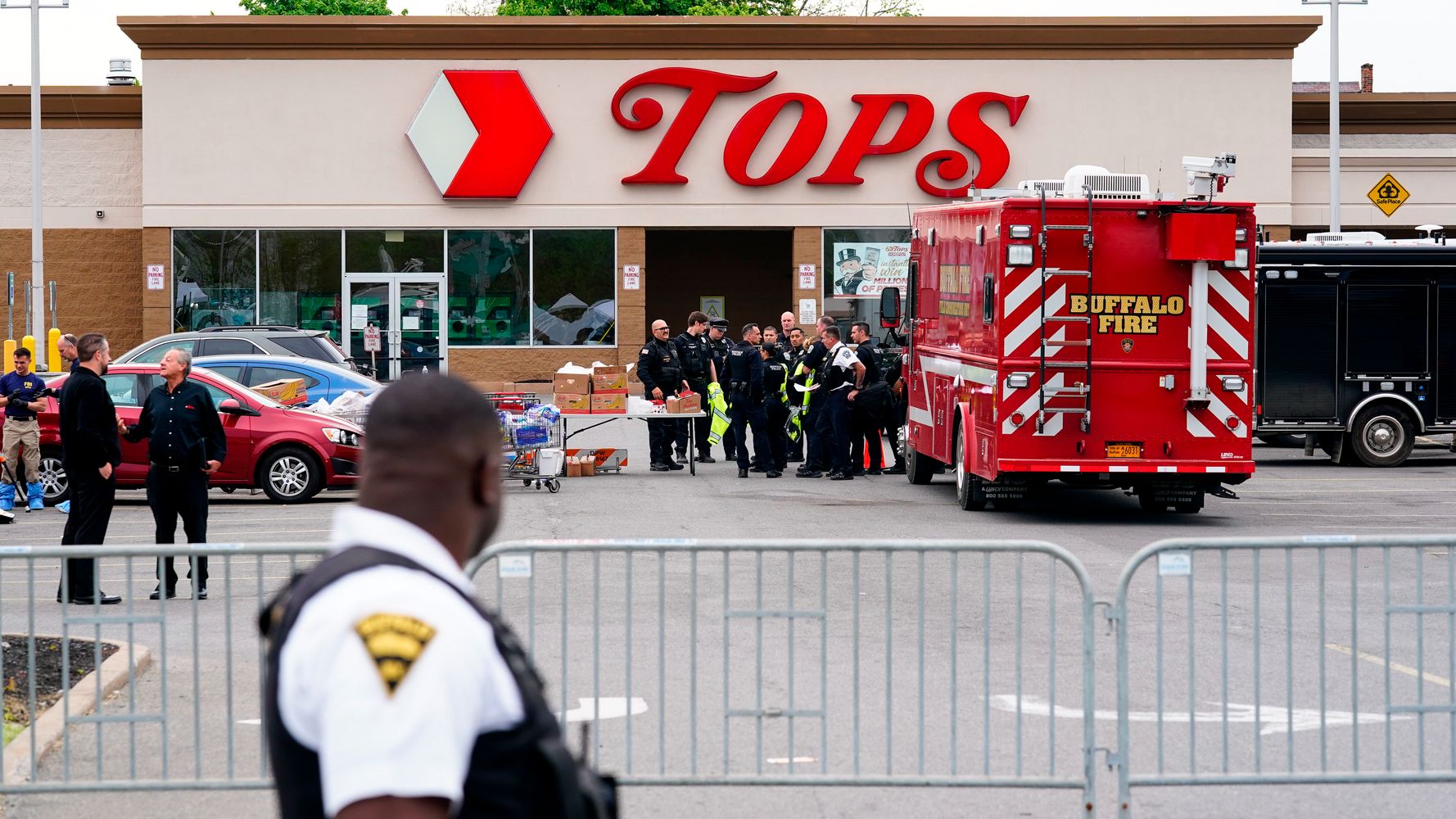 In a written screed that circulated on dark corners of the Web, Payton Gendron described fears about “replacement theory”: a white nationalist conspiracy that alleges an elite plot (often coded as a Jewish plot) to deliberately replace white Americans with immigrants and people of color. Gendron wrote that he targeted the Tops Supermarket because of its location in a predominantly Black neighborhood. Eleven of the people killed or wounded are Black.

Many elected officials have placed the blame for the killings at the feet of right-wing news sites and social media.

“I write to urge you to immediately cease the reckless amplification of the so-called ‘Great Replacement’ theory on your network’s broadcasts,” Senate Majority Leader Chuck Schumer (D-N.Y.) wrote in a letter to Fox News and host Tucker Carlson. “I urge you to take into consideration the very real impacts of the dangerous rhetoric being broadcast on your network on a nightly basis.” Sen. Tim Kaine (D-Va.) took aim at social media websites in a tweet. “We must stop Big Tech from propagating Big Lies that lead to carnage.”

In the coming weeks, much will be made about the shooter’s manifesto, gun laws, and how much blame social media deserves for making it easy for these kinds of ideas to spread.

Maybe better gun laws and more accountability for platforms that spread dangerous hate speech would have prevented Gendron radicalization and subsequent rampage — or maybe not. All policymakers can do is improve the environment that has produced an alarming string of racist mass shooters in recent years.

But there’s another truth about Gendron: He was deeply confused about basic issues of history, and of race. This left him vulnerable to rancid misinformation like the conspiracies he found online. And growing up in a nearly all-white area, he likely had no real-world experience to help counteract those misconceptions.

That’s where the value of education comes in: teachings that are straightforward about the racial history of this country, and present honest accounts of the struggles faced by nonwhite Americans. There has been a push in recent years to accomplish this through the lens of critical race theory, an academic approach that studies structural racism and how that impacts law and policy.

But the right wing has launched a moral panic about critical race theory. After white police officer Derek Chauvin murdered George Floyd in 2020, massive racial justice protests swept the nation. But like with every inkling of incremental steps toward Black progress, conservatives quickly met the moment with a backlash.

Dozens of states have introduced laws to combat this imaginary problem, including prohibiting teachers from teaching certain things and banning books that discuss racism.

White conservatives perverted its definition to mean teaching white K-12 students to hate themselves. Anything that falls under the purview of racism and America’s past has now fallen under their incorrect interpretation and has led to the silencing of educators.

It’s crucial to understand that this attack on anti-racist education will only produce more ignorance, more division, and more hate around issues of race.

Even this week, educators in states with critical race theory bans must now grapple with how to even talk about the massacre in Buffalo.

Elizabeth Close, a high school teacher in Texas, told NBC News that she was struggling with how to speak about the killings with her students because state law requires that she teach different perspectives.

One viewpoint is that Gendron was motivated by racism. “Another perspective is that this young man was out defending the world — or his kind — from being taken over,” Close said she told her students. “If you guys want to know why I’m thinking about quitting at the end of the year, it’s because of these types of policies — the fact that I have to have this conversation with you.”

Proponents of such critical race theory bans have argued that these laws are intended to keep racism out of the classroom. But really, these laws are forcing teachers to lend credence to dangerous ideologies.

“We need to pay attention to what has happened in this country and how what has happened is continuing to create differential outcomes, so that we can become the democratic republic we say we are,” Columbia University professor and leading critical race theory scholar Kimberlé Crenshaw explained last year. “We believe in the promises of equality, and we know we can get there if we confront and talk honestly about inequality.”

One of the cruelest ironies of the CRT culture wars is that America’s racial history was already an understudied and under-discussed topic, at least at many public K-12 schools. It’s hard to know if Gendron was taught about Reconstruction or the violence that followed it, the impact of Jim Crow laws or lynchings and the impact that history has on our society today.

But it’s safe to say too many people never get that education. They don’t know that in response to the prospect of racial equality, whites organized militias to terrorize freedmen into submission. The history of this country gets sanitized and repackaged and regurgitated to each new generation.

The new crusade against critical race theory means that educators can’t teach about slavery or the Ku Klux Klan. But mainstream Republicans can encourage the so-called replacement theory (even after a white man kills in the name of it) with almost no pushback, validating the views of aggrieved white nationalists.

Elected officials, perhaps the institutions most equipped to combat the spread of critical race theory panic, have treated it as a sideshow and just another flashpoint in the culture war that will eventually fade away.

But not even a massacre has stopped Fox News hosts and Republican politicians from echoing the shooter.

Perhaps the overtness of it ebbs and flows, but the theories that the Buffalo shooter espoused have always been present in the United States. The country is currently at an inflection point in which the right wing is saying that white supremacy is the legitimate ideology and racism and discrimination claims are just tools to demonize white conservatives. The end result will be more Buffalo-like tragedies.

Opinion | Finally, some recompense to survivors of the Tulsa Race Massacre