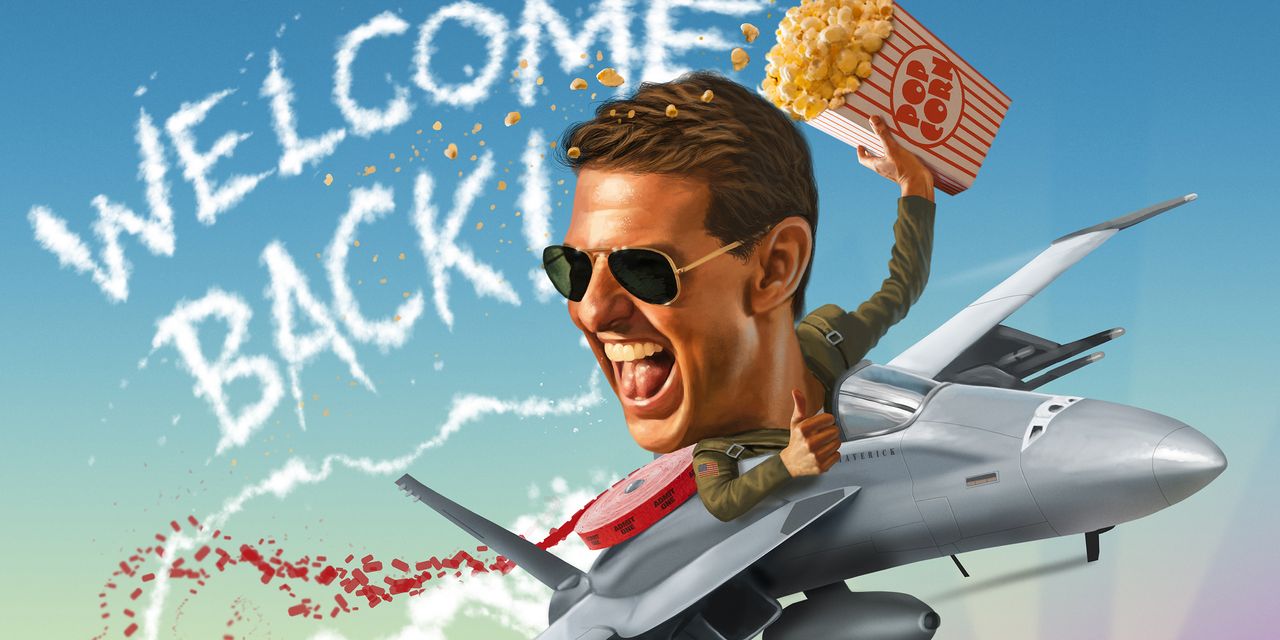 If absence makes the heart grow fonder, “Top Gun” fans should be flying over the moon.

Paramount Pictures’ “Top Gun: Maverick” makes its debut next weekend almost exactly 36 years after the original movie first hit theaters. It also might be one of the most delayed movies of the pandemic era, having seen its release date move four times since April 2020. But the studio seems to have picked its final landing spot well; the domestic box office has hit about $2.3 billion so far this year, propelled by blockbusters like “The Batman” and “Dr. Strange in the Multiverse of Madness”—both of which scored among the highest opening weekends of their respective franchises even when compared with prepandemic releases, according to Box Office Mojo.

Despite all the trappings of a blockbuster in its own right, though, the new “Top Gun” is still risky in the Covid era. The domestic box office is trending more than 40% below its prepandemic level. Those films that have worked mostly come from established franchises in the superhero genre. That creates uncertain prospects for a movie with a single predecessor that came out during the Cold War. Even young teens who loved the first “Top Gun” are pushing 50 now—a demographic that has proven somewhat reluctant to return to movie theaters.

Still, that one movie was a big deal. The original “Top Gun” was the top-grossing film of 1986 and became a cultural touchstone, firmly establishing

as one of Hollywood’s most bankable leading actors. Its total inflation-adjusted domestic haul of nearly $438 million made it the highest-grossing movie until the first “Batman” came out three years later, according to box-office data site The Numbers.

Expectations aren’t quite as high this time, but they are close. Shawn Robbins of Boxoffice Pro, which makes projections for U.S. theatrical exhibitors, estimates “Top Gun: Maverick” will range between $280 million to $395 million in total domestic box office. That would put the movie solidly in the top-five projected grossing films for the summer; projections for the new “Dr. Strange” and “Jurassic World Dominion,” coming out in mid-June, are currently higher.

the recently renamed parent of the namesake studio, is expected to see theatrical revenue jump 71% year over year to about $229 million in the second quarter—the segment’s highest since the third quarter of 2019, according to consensus estimates from

Can the new “Top Gun” hit that target? Yes—provided the movie has appeal beyond the Gen-X crowd that made the first one such a hit. According to a recent survey by Wedbush Securities, more than half of those aged 45 and up haven’t been to a movie theater over the past year, compared with just over 20% of those between 18 and 24. But the same survey found nearly 70% of respondents in the 45-55 age category planned to attend a movie this year, with even higher numbers in younger age brackets.

Appealing to a wide audience in 2022 requires the new “Top Gun” to keep the charm of the original while losing some of its more dated elements. Early reviews suggest that it has, with many calling the new film superior to the first and praising the aerial shots and other visual effects that were created largely without computers. And Mr. Cruise, who turns 60 in July, has done well keeping himself in front of younger movie audiences. His Mission: Impossible franchise alone has totaled nearly $3.6 billion in global box office revenue to date, with two more installments currently in production.

Paramount also is hoping history repeats itself, after a fashion. The original “Top Gun” is ranked sixth among the “Leggiest Movies” of all time by The Numbers. This is based on a ratio measuring the size of the spread between a movie’s largest weekend gross and all-time domestic gross, and reflects the fact that the movie stayed in wide theatrical release from mid-May through the end of October that year and was still in more than 450 theaters by Christmas.

Such a run is a bigger relic than the F-14 jet fighters Mr. Cruise’s character flew in the original. Even prepandemic, the biggest films got about three months at best from their original theatrical release. Now most major studios give movies 30-45 days in theaters before moving them to their own streaming platforms. But Paramount is banking on the sequel showing what counts for legs in 2022. In an interview following the company’s first-quarter results earlier this month, Chief Financial Officer

said “Top Gun: Maverick” will be getting a longer theatrical run than the 45-day window the company has set for most of its theatrical releases.

Maximizing theatrical return is a wise move—especially considering that investors have recently become more skeptical about the economics of streaming. And Paramount just got a strong vote of confidence from Warren Buffett’s Berkshire Hathaway, which reported Monday that it bought up a major stake in the company during the first quarter. Paramount represents the only major media holding in Berkshire’s portfolio.

At least the Oracle of Omaha doesn’t expect an aging Maverick to crash and burn.

Denial of responsibility! Elite News is an automatic aggregator of the all world’s media. In each content, the hyperlink to the primary source is specified. All trademarks belong to their rightful owners, all materials to their authors. If you are the owner of the content and do not want us to publish your materials, please contact us by email – [email protected]. The content will be deleted within 24 hours.
artsArts/EntertainmentAudiovisual ProductionBroadcastingCinema Film ProductionEntertainmentgeneral newsmedia
0
Share FacebookTwitterGoogle+ReddItWhatsAppPinterestEmail

Who is your work Joe Manchin?