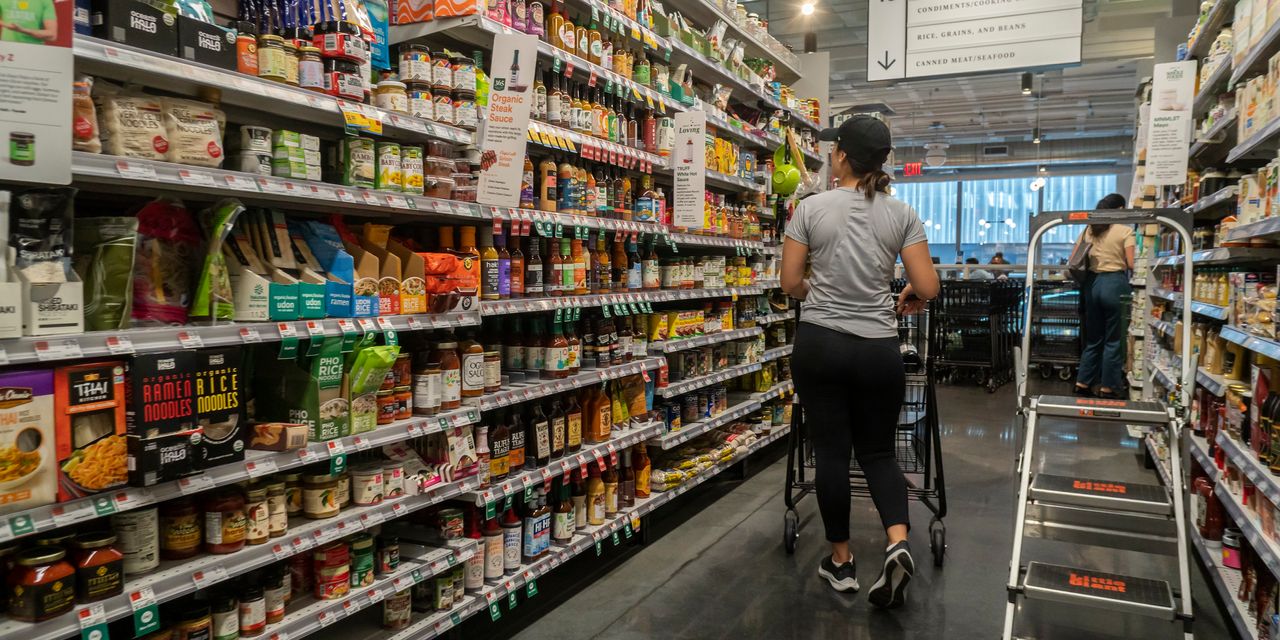 The peak inflation story that propelled investors back into risky assets this summer got a big boost from Wednesday’s figures showing prices fell slightly last month.

Unfortunately, there’s no sign the Federal Reserve will change its mind and agree with investors that rates should come down again next year. Even if it does, mixed economic signals might well move the market’s focus away from inflation and interest rates and on to the shaky support for earnings.

The immediate response of traders to the better inflation numbers was to slash bets on another three-quarter percentage point rate rise at the next Fed meeting. Also priced in was for rates to top out at a lower level at the end of the year, with less chance they hit 4%, and to come down faster than previously thought. That meant lower bond yields, boosting stocks, especially growth stocks expected to make their money further in the future.

There’s no doubt the headline inflation figures were good, coming in lower than expected even in the “core” prices that exclude food and energy. There was even a tiny fall in month-on-month prices, thanks to plunging fuel costs.

Dig in, and the picture is not so reassuring. Inflation remains both broad-based and far above the Fed’s target.

The Cleveland Fed calculates a median consumer-price index and one that trims off the prices that moved the most. This is meant to try to get a sense of how broad-based price rises are—and both rose more than core prices last month. To add to the confusion, both were higher year-over-year in July than in June, even as the month-on-month rate fell back from the extreme reached earlier in the summer.

The Atlanta Fed’s index of “sticky” prices, those that are changed less often and are thought to provide a better guide to what businesses expect, fell. But it still rose at a worryingly high 5.4% annualized in July.

Finally, the New York Fed’s Underlying Inflation Gauge, which incorporates economic data as well as prices to try to get at the inflation trend, hardly dropped at all—putting it in a range of 4.7% to 5.9%.

Still, if it turns out investors are right that inflation has peaked and will continue to moderate from here—one might even say be transitory—that should hold down bond yields, and help stock valuations.

There’s been a tight link since 2017 between after-inflation Treasury yields and the valuation of the market using forward price/earnings ratios; a higher yield on benchmark 10-year Treasury Inflation-Protected Securities has meant lower P/E ratios. The link is even tighter between TIPS yields and growth stocks, points out

“The most capitalist valuation metric in the world, the P/E of the S&P [500], is now just completely dominated by monetary policy,” he said.

That worked against investors in growth stocks this year until TIPS yields peaked in June. Since then, a drop in yields has helped drive a big rally in share prices as valuations rose again.

The case for stocks is that peak inflation means bond yields can stabilize, and maybe even come down a bit. And it might be right, although the Fed is—deliberately—becoming less predictable. So, it’s hard to be as sure as the market seems to be.

But valuation is only half the investment story of higher interest rates. The other is the impact on the economy, and so on earnings.

Investors have mostly ignored the potential for a hit to earnings, with profits expected to rise this year and next. Stilll, monetary policy famously has long and variable lags before affecting the economy, and even the most bullish investors still expect several more Fed rate rises.

There are plenty of straws in the wind indicating that an economic slowdown is on the way. Mortgage applications for new purchases are the lowest since the first lockdown in 2020. Initial unemployment claims have been ticking up since March. Consumer and small-business confidence has collapsed. Manufacturing new orders are shrinking while inventories rise.

The risk is that slowdown turns to recession, and corporate earnings are hit hard. If that happens, the pattern of the dotcom crash will repeat: the first leg down will be due to falling valuations, and the second due to falling earnings.

The other possible parallel is in the bear-market rally. The crash in 2000 started in March, but by September the S&P 500 had rallied more than 10% from its low. This allowed tech stocks and the Nasdaq Composite to gain enough to put them back in positive territory for the year. It didn’t last.

What is your outlook for inflation and the market this fall? Join the conversation below.

The bearish interpretation is that investors are good at ignoring the blindingly obvious and are doing it again with the 15% rise in the S&P 500 from its June low.

In 2007, the subprime crisis went global 15 years ago this week, when French bank

froze three money-market funds. After a brief panic, the S&P managed an 11% rally by October, with the financial sector rising further, even as Britain experienced its first run on a bank in a century. This was the global financial crisis, but shareholders missed massive flashing red alerts.

The bullish interpretation is that no one could have anticipated the Sept. 11 attacks of 2001 that worsened the dotcom crash, while regulators have dealt with the financial complexity and hidden leverage that devastated the world’s banks in 2007.

I lean toward thinking this is a bear-market rally that won’t last. Investors wanting to load up on stocks at this point need the Fed to navigate a narrow route between too much inflation on one side and a serious recession on the other. Either of these would sink the market.

Denial of responsibility! Elite News is an automatic aggregator of the all world’s media. In each content, the hyperlink to the primary source is specified. All trademarks belong to their rightful owners, all materials to their authors. If you are the owner of the content and do not want us to publish your materials, please contact us by email – [email protected]. The content will be deleted within 24 hours.
bankingBanking/CreditCentral Bank InterventionCentral bankingConsumer Price IndexcreditEconomic Newseconomic performance
0
Share FacebookTwitterGoogle+ReddItWhatsAppPinterestEmail

“I definitely think it was unfair and suspicious”: Supporters, GOP lawmakers rally behind Trump amid FBI search