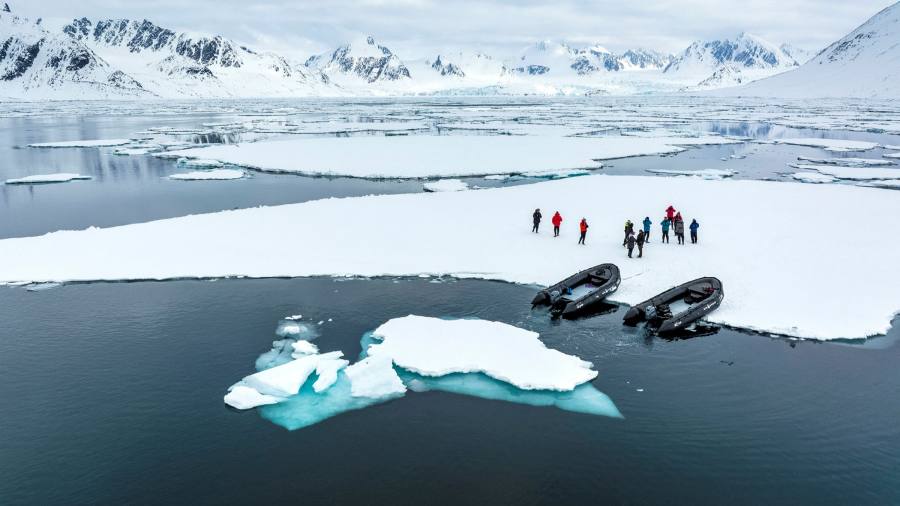 The lonely shores of Svalbard

From a distance, it looked like a ballet. It was 2am and I stood on the prow of our Zodiac, staring out over the ice floes east of Daudmannsodden, Dead Man’s Cape in English. Two big male polar bears were circling each other beneath the midnight sun, the Wahlenbergbreen glacier sparkling behind them.

As we edged closer, it became clear this was a duel, not a dance. Throaty howls carried on the brittle air, then there were headbutts, raised paws and bared teeth. As the bears fought, we spotted something red near their feet: a bearded seal carcass, staining the ice with blood. It was dinner for a week, for one.

Expedition guide Christian Bruttel cut the engine and we floated through the sea ice along the shore. Another two bears appeared over a crusted ridge — this time a mother and cub, now thrillingly close — and Christian raised a finger as if to say: “Shh!” Then, not far away, a fifth was spotted through binoculars, walking amid a flurry of glaucous gull scavengers. Wildlife watching usually demands patience, local knowledge, subterfuge and luck but in Svalbard in May, at the start of the polar summer, the sightings were fast and astonishingly easy. This was only day one, ahead lay a vast uninhabited kingdom of black sea, grey sky, white ice and wild creatures.

We were sailing north from Longyearbyen on a “expedition micro cruise” arranged by a new tour operator called Secret Atlas. The micro refers not to the route or duration (several hundred miles over nine days) but the size of the ship. While many Arctic cruises carry hundreds of guests — and one, the Crystal Serenity, has carried more than 1,000 through the Northwest Passage — Secret Atlas limits its ships in the region to a maximum of 12. Not only do such small groups make it easier to appreciate the silent wilderness, small ships can be more impromptu with their itineraries and programmes and can get much closer to the shore.

The company was founded in 2019 by keen yachtsmen and polar devotees Andy Marsh and Michele D’Agostino, but the pandemic put everything on hold and means this is only their second season. They operate trips to both Antarctica and the Arctic but Svalbard is clearly a particular inspiration. “Svalbard’s a wild frontier in a world running short of adventures,” says Marsh. “Compared to Antarctica, this feels abandoned.”

In truth, even Svalbard is less abandoned than it was. The number of overnight stays by tourists in hotels and guesthouses in the main town of Longyearbyen rose from 46,000 in 2009 to 147,000 in 2019. Out amid the ice floes though, and heading for the archipelago’s remote northwest, we were very much on our own.

We were aboard the MV Villa, a former buoy-laying vessel built to order for the Norwegian Coastal Administration but now converted to carry passengers. The functional exterior belies surprising levels of comfort: three-course meals with paired wines were served in a retrofitted dining saloon and the bridge doubled as a communal observation deck for guests and the 12 crew. The pack ice that makes Svalbard’s fjords and islands impenetrable from September to late April had retreated, leaving channels that were navigable yet clogged with a constantly shifting maze of icebergs. Some acted as rafts for groups of seals and walruses; others would roll without warning, like dogs wanting their bellies scratched. With temperatures nudging above -10C, we pushed further north.

Beyond Prins Karls Forland, up on the “Seven Glaciers Coast”, the sun hit the fog and ice crystals sparkled like a kaleidoscope. We watched reindeer fattening themselves along the shore and cliffs pockmarked with black guillemots. No one lives up here, but there are echoes of former lives.

On Danskøya island, we passed the site from where, in 1897, the Swedish aeronaut S A Andrée took off in a hydrogen balloon with two colleagues in an attempt to reach the North Pole. Their flight lasted just 65 hours; the crew safely crash-landed on the sea ice but perished after a three-month struggle to walk back to safety.

Nearby we saw the ruined ovens of Smeerenburg, a Dutch settlement whose name is usually translated as “Blubber town”. It was established by whalers from Amsterdam in 1619 and by the 1630s there were up to 200 men working here, boiling blubber in copper kettles to make oil, and making barrels to transport it. A fort was built to ward off whalers from rival nations, but the project was shortlived. By the 1640s so many whales had been slaughtered that they had become scarce in the area, and whaling ships were increasingly carrying blubber back to port in casks rather than using local shore-based processing plants. By about 1660, Blubber town had lost its last residents.

We pushed through waltzing ice into the Magdalenefjorden, where about 130 Dutch seamen from the 17th and 18th centuries lie buried. (There are concerns that erosion, accelerated by climate change, will soon result in some of the skeletons coming to the surface).

One evening beneath the looming Smeerenburg glacier, the freezing iceberg suddenly imprisoned our Zodiac. Three giddy walruses popped up beside us to gauge our predicament. Then, with the outboard engine spewing up pounded slush, and the reinforced rubber nose pounding out a relentless beat on the ice ahead of us, the floe changed course, split in different directions and set us free. It began to snow heavily. It was a reminder of how far we were away from summer and home.

Out here, the sky teemed with life. The rare king eider and puffin were constant companions, as was the little auk — like a diminutive penguin — and Arctic tern, which migrates from the Arctic to the Antarctic every year, a distance of three times to the moon in a lifetime. They added splashes of colour and movement against the sombre backdrop of glaciers.

For, while they are inspiring and impressive, Svalbard’s glaciers can be sombre places. They are shedding ice at a record pace: the Kongsvegen and Kronebreen glaciers, which we saw the next day, are retreating at more than 200 metres every year. As we watched, there was a thunder-crack as if from a Norse god and, suddenly, a pillar of ice the size of a London bus calved from Kongsvegen into the fjord. Drifting awhile we watched more ice disintegrate before our eyes. Of course, these glaciers have always calved like this, but it was hard not to feel uneasy.

At Poolepynten, scores of leathery males, all blubber and pointy ivory, thronged the shore, magnificent if foul-scented

A day later, in Ny-Ålesund, I succumbed to the lure of the real world. A storm forced us to seek the shelter of the Kongsfjorden, so we downed anchor at what is the world’s northernmost permanently inhabited civilian settlement. Originally a mining outpost, it is now home to about 100 scientists and climate change researchers in summer, and about 30 year rounders. I took a walk past the northernmost post office, northernmost museum and northernmost Roald Amundsen bust, to go for a drink in the northernmost pub. Unnamed and unsigned, it is officially only open to the scientists working here, but it was a Saturday and they took pity on me. Inside, I drank subsidised beers with eloquent French, German, Norwegian and Scottish academics, then left next morning with an explosive hangover.

On our final day, we came to Poolepynten on the east side of Prins Karls Forland, and set off in a Zodiac to see a large group — or “haul out” — of Atlantic walruses. Ironically, the promontory is named after Jonas Poole, an English explorer and enthusiastic whaler, sealer and walrus hunter, but it has traditionally been regarded as a safe harbour for the long-tusked mammals. Like whales, walruses were heavily hunted in Svalbard, not just for their blubber but for ivory and their thick hides, which were used to create machine belts during the Industrial Revolution. By the time hunting was banned in 1952, only about 100 remained but numbers have bounced back strongly; a 2018 survey estimated there were 5,500 in the Svalbard area. At Poolepynten, scores of leathery males, all blubber and pointy ivory, thronged the shore, magnificent if foul-scented.

A century ago the great Norwegian explorer, scientist and Nobel laureate Fridtjof Nansen sailed in his own yacht, Veslemøy, to Svalbard. His objective was to take oceanographic observations, but he clearly felt a deep connection with the magnificence of the far north. “Strange, there is always sadness on departure,” he wrote. “It is as if one cannot after all bear to leave this bleak waste of ice, glaciers, cold and toil.” Those words stuck with me as I found myself waiting at the luggage carousel at Heathrow less than a day later. Soon after, my thoughts lost in the Arctic, I was quickly swallowed up by the streets and a blizzard of people.

Mike MacEacheran was a guest of Secret Atlas (secretatlastravel.com). Eight-day trips on the MV Villa cost from £6,700 per person, with departures from April until August. Double rooms at the Radisson Blu Polar Hotel (radissonhotels.com) in Longyearbyen cost from NKr1,740 (£142)