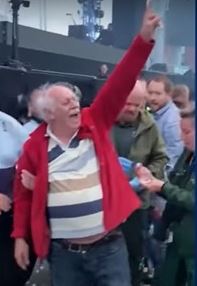 ‘The Killers’ Stop Show to Check on Crowd Surfer

(Newser)
–
The Killers, an American rock band out of Vegas, hit the brakes on a show in Manchester, England, on Saturday night when frontman Brandon Flowers noticed a fallen crowd surfer. Per Loudwire, video shows Flowers asking the crowd, “Who dropped him?” Laughter can be heard, but then Flowers noticed the man was injured. “Come on, is he OK?” Flowers asked, “Oh, his head’s bleeding a little bit. Let’s just take care of him.” Flowers then left the stage (see the video) and ran down to check on the fan personally. It turned out to be “Billy,” a 67-year-old man who just wanted to rock.


The encounter was broadcast on the stadium jumbotron for all to see. After a warm embrace, Flowers returned to the stage to update the crowd. “Billy was trying to crowd surf,” he explained, per Consequence Sound. “I said, ‘Billy, what are you doin’?’ And you know what he said? He said, ‘I’m enjoyin’ meself.'” According to the BBC, “Billy” is actually Doug James, a retired engineer and first-time crowd surfer. He was attending the show with his son Barry and was shocked when Flowers ran to check on him and give him a hug. “He was concerned about me and asked if I was OK. What a lovely gentleman,” James reported. (Read more The Killers stories.)

ECB has ‘no limits’ in defence of euro from debt turmoil, says executive