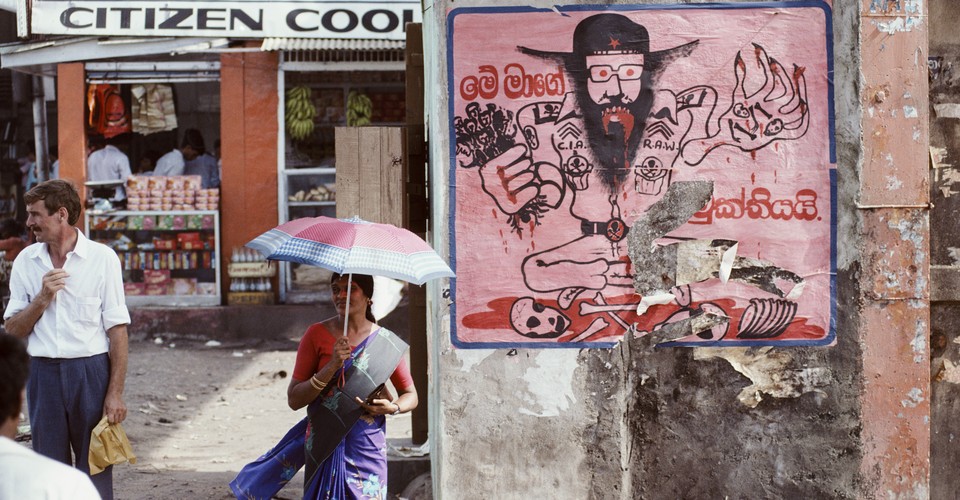 The Innocents at Risk From a U.S.-China Cold War

When Ranasinghe Premadasa took over as Sri Lanka’s president in 1989, his government was facing down two armed rebellions. In the north, the Tamil Tigers were fighting to establish an independent state. In the south, a leftist group called the Janatha Vimukthi Peramuna (JVP) was claiming that leaders in Colombo had no legitimacy and calling for a national revolution. Even before Premadasa’s inauguration, the state had waged war on both fronts.

The fight against the Tamil Tigers would go on for two more decades, taking thousands of lives and gaining international notoriety. The battle with the JVP would last for only a short period, and is remembered by few outside Sri Lanka. Yet it was among the deadliest conflicts at the time. “People just disappeared,” says Nira Wickramasinghe, a historian of modern Sri Lanka at Leiden University, in the Netherlands. “Anyone with any kind of leftist association was under threat.”

The JVP was waging an armed insurrection, and the Sri Lankan government decided to put an end to it. Their tactics were horrifying: Students, union members, artists, and intellectuals were swept up in a sea of anti-communist violence. The authorities worked with paramilitary groups to crush the JVP. Estimates put the number of lives lost at 40,000 to 60,000, but no careful accounting has ever been done. U.K. government archives indicate that Western governments knew Sri Lanka and its proxies were systematically killing innocent civilians. And according to the top British diplomat in Colombo at the time, Sri Lankan officials were confident that the West would support them, prioritizing the fight against communism over human rights.

“They felt that they had carte blanche,” David Gladstone, the United Kingdom’s high commissioner to Sri Lanka from 1987 to 1991, told me, referring to the government in Colombo. Officials believed “that the United States would look the other way, providing they were killing communists.”

Western voices have begun to characterize the U.S.-China rivalry as a new cold war, with the more hawkish among them demanding that Washington and its allies confront Beijing. Too often, these conversations evaluate this potential conflict and its consequences as if they will only concern people in the U.S. and China. How much damage—economic or military—would the two powers tolerate? How much might each suffer? Who would win?

These questions are insufficient. If a new cold war is anything like the last one, it will not principally be American or Chinese citizens who suffer. During the confrontation between the U.S. and the Soviet Union, huge numbers of people were reduced to collateral damage, far away from famous First World flashpoints such as Berlin, their deaths seen as acceptable, if not celebrated.

One of the most important lessons from that conflict should be that it was primarily innocent people—mostly in poor, developing countries—that paid the price. Our media paid little attention to them, and our governments wrote off their deaths as part of what is now called “great power competition.”

Last year, I published a book about a U.S.-backed Indonesian program from 1965 that killed approximately 1 million leftists and people accused of being associated with the Indonesian Communist Party. I also covered similar episodes throughout the Cold War—there were a lot, so many that I missed the Sri Lanka case.

In my research, I found an array of instances in which Washington provided direct assistance to or tacit approval for governments to kill leftists or accused leftists. These atrocities deeply shaped the world we now inhabit. Right-wing governments, allies of Washington, and fanatical anti-communist movements would trade tips and tactics, often with the help of U.S. officials. They learned that if they killed America’s putative enemies in the Cold War, they would be rewarded. When these groups took inspiration from what happened in Indonesia, they used the metonym Jakarta, most famously when they filled the streets of Santiago, Chile, with graffiti threatening Jakarta is coming. The victims of these mass murders were not Soviet Communists—they were local people in places such as El Salvador, the Philippines, and Argentina, many of them with no links to Moscow whatsoever.

Concentrating solely on these campaigns, as I did in my book, does not account for the full impact of the U.S.-Soviet rivalry on innocents elsewhere: Hot wars were fought too. Many Americans know, for example, about Vietnam, because our compatriots went there to fight, and more than 50,000 lost their lives. Not as many, however, realize that 3 million Vietnamese died—two-thirds of them civilians. Fewer still know about the wars in Angola or Mozambique, or the Malayan Emergency. The Cold War took the lives of several million innocent people in the global South. The total U.S. and Soviet deaths are a small fraction of this.

In all, I found 22 episodes during the Cold War, including the Indonesia massacre, in which this “Jakarta method” was used. Sri Lanka makes it 23.

Gladstone has been trying to raise awareness of the Sri Lanka violence for decades, and wrote a book about his experiences in the country. I’ve spoken with Gladstone, now retired in Cumbria, in northern England, over the phone several times since last year. (He was introduced to me by Declassified UK, an investigative outlet.) His recollections of the period are vivid, and echo stories I heard throughout the course of my research.

Sri Lanka’s defense minister at the time, Ranjan Wijeratne, told Gladstone in 1989 that he had a plan for putting down the JVP, calling it “the Indonesian solution.” Like everyone who had been paying attention to the Cold War in the developing world, Gladstone understood immediately what that meant.

In the months that followed, the former diplomat told me, “there were corpses lying around everywhere, people floating down the river, and bodies piled up under bridges.” He continued: “It wasn’t difficult to see what was going on if you wanted to know.”

Gladstone said he tried to raise the issue with authorities in London and his American counterpart, but was rebuffed. According to Gladstone, James W. Spain, the U.S. ambassador to Colombo at the time, explained to him the line coming from Washington: “We regard Premadasa as a strong ruler, and he is just what we want in that part of the world.”

Declassified files at Britain’s National Archives confirm that London was well informed about the extent of the atrocities. In a 1989 cable, Gladstone wrote that Sri Lankan security forces and affiliated death squads had killed up to 30,000 people just that year. “Most of these victims,” he wrote, “were young men whose only ‘crime’ was to have associated with—or even be related to—JVP suspects.” Anyone defending human rights or fair trials was branded a JVP sympathizer, and in many parts of the country, security forces had no legitimacy with local populations and ruled through terror, he wrote. In another communication, from early 1990, Gladstone noted that Sri Lanka’s inspector general of police had admitted that “local army commanders were deliberately strewing corpses around in the belief that this deterred people from joining the JVP.”

Both the U.S. State Department and Britain’s Foreign, Commonwealth and Development Office declined to comment about the period in question and Gladstone’s assertions. The FCDO pointed me to information about its commitment to human rights in Sri Lanka in recent years. Spain died in 2008. Both Premadasa and Wijeratne were assassinated in the early 1990s. The current Sri Lankan government, much changed since then, also declined to comment on the crackdown.

Many Cold War cases are even more shocking than the tragedy in Sri Lanka, and provide more damning evidence of the ways in which the conflict deformed the 20th century. Unlike the unarmed Indonesian Communist Party—which both Richard Nixon and British intelligence recognized would win fair elections—the JVP had chosen the path of violent struggle. Its tactics divided the Sri Lankan left, alienating even some who had previously supported them. I found no evidence that Western governments actively encouraged or assisted in the killings in Sri Lanka, as they did in Indonesia.

The JVP’s success or failure was unlikely to be a turning point in the formation of the global order. In contrast, progressive democratic movements in Chile, Guatemala, and the Democratic Republic of Congo could have changed the outcome of the Cold War in the global South, were it not for violent right-wing repression.

The Indonesia case, in particular, changed everything. Not only did anti-communist movements take inspiration from the murderous violence, but many leftist movements came to the conclusion that they must radicalize or face a similar fate. The JVP is now a legal political party in Sri Lanka, but Bimal Rathnayake, a senior JVP official, told me that its original decision to take up arms, before its first uprising, in 1971, was strongly influenced by what it saw happen in Indonesia.

Like other instances of the use of the Jakarta method, though, Sri Lanka should prompt us “to ask what makes certain populations torturable, disposable, and ignorable,” Thushara Hewage, an expert on recent Sri Lankan conflicts at the University of Ottawa, told me. In the case of Sri Lanka, he said, multiple factors allowed for the dehumanization of victims. Class and caste, for example, made it easier to target them with impunity.

Their relationship to a global conflagration was also very important. These individuals could be portrayed as part of the “international communist conspiracy,” or what might now be called a threat to the “rules-based international order.”

The atrocities I examined had multiple causes, but this last element made the most horrible outcomes possible. Complex mental gymnastics are not required to imagine how this could apply today. Countries such as Venezuela and Iran have been viewed as threats for decades, and sanctions imposed on these nations kill innocent people without producing any appreciably positive outcomes. We need not cross some invisible line into a new cold war to see these dynamics worsen.

I asked Gladstone what he took away from his experience in Sri Lanka. He told me that he now believes that neither media outlets writ large nor Western authorities care much about the individuals who perished during the Cold War. “A lot of it simply came down to how rich the people concerned were,” he said. “Our political masters would ask, ‘How many battalions can that country put in the field? How much trade can they command?’ So for them, Sri Lanka didn’t matter.”

I have added the Sri Lanka case to the new edition of my book. It is testament to the horrors of the Cold War that this is just one more on a long list.

Denial of responsibility! Elite News is an automatic aggregator of the all world’s media. In each content, the hyperlink to the primary source is specified. All trademarks belong to their rightful owners, all materials to their authors. If you are the owner of the content and do not want us to publish your materials, please contact us by email – [email protected]. The content will be deleted within 24 hours.
British intelligencecarte blancheCold Warcrackdown.Many Cold War casesDavid Gladstonedefense ministerDevelopment Officefamous First World flashpoints
0
Share FacebookTwitterGoogle+ReddItWhatsAppPinterestEmail

Girl Who Died of COVID Had Risky ‘Classroom Job’: Parents