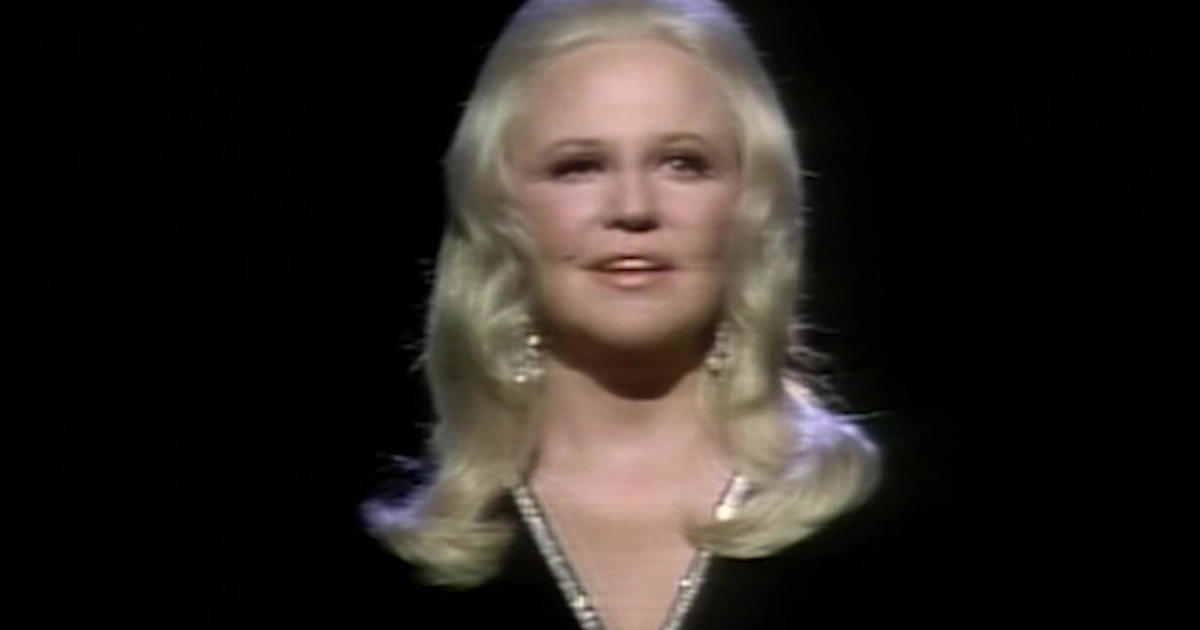 The cool power of Peggy Lee

In 1970 Peggy Lee won a Grammy for “Is That All There Is,” a song that many heard as an anthem of ennui …

… but not Lee, says her granddaughter, Holly Foster-Wells: “She saw it as absolutely life-affirming and hopeful, that bad things are gonna happen and that you can rise above them. Stand up and have a ball. Celebrate life, in spite of all of this that’s happening.”

And Lee had a lot to celebrate. At 50 she was already a legend, an artist of astonishing versatility – a master of cool (with “Black Coffee”), a heartbreaker (“Then Was Then (And Now Is Now)”), and a trailblazer [“I’m a Woman”].

And all of those Peggy Lees can be traced back to the desolate plains of North Dakota, and the girl then named Norma Deloris Egstrom. There, in the tiny town of Wimbledon, in what’s now the Peggy Lee museum, Norma spent her high school years.

“It’s powerful; it feels like it could blow this house down,” said Foster-Wells.

Her mother had died when she was just four. Her father, the town’s railroad depot manager, was an alcoholic. Foster-Wells said, “He really at times couldn’t run the depot, so she would have to take over for him.”

Worse still, her father remarried a woman who was physically abusive. Lee later wrote that her stepmother once beat her over the head with a cast-iron skillet.

“My grandmother, she said she would look out at the railroad tracks and just imagine where they led,” said Foster-Wells. “It was a way out. That’s what the railroad represented to her. And of course, her other way out was music.”

By 17 she was singing on the radio as Peggy Lee, and before long touring with Benny Goodman’s band, often the only woman on the bus.

“She said that these men always looked out for her,” Foster-Wells said. “People took her under their wing. She had that quality, where you wanted to protect her.”

By now she’d cultivated a style that was as minimalist as the landscape she’d grown up in – cool, but never cold.

Foster-Wells said, “She had the philosophy of less is more. And she would bring you in. Like, you had to pay attention.”

Richmond added, “And so, for the rest of her life, she knew that the more she could get the room silent, the more she’s got them.”

“She said the challenge is to leave out all but the essentials – keeping it right there, minimal,” said Foster-Wells.”

Peggy Lee and the Benny Goodman Orchestra perform “Why Don’t You Do Right” in the 1943 musical, “Stage Door Canteen”:

It was while touring with Goodman that she met guitarist Dave Barbour. They married in 1943.

“They had such chemistry together,” said Foster-Wells. “That was the love of her life, my grandfather.”

Peggy Lee performs “I Don’t Know Enough About You”:

But Barbour, like her father, had a drinking problem, one that only got worse as Lee got bigger, and the marriage ended in 1951.

“It broke her heart,” Foster-Wells said. “But just as she always has done, it fueled her music.”

Don’t cry, there’ll be another spring
I know our hearts will dance again
And sing again, so wait for me ’til then

The 1950s were Lee’s most prolific and innovative period. A rarity among women at the time, she was a singer-songwriter with 270 songs to her name.

Rocca asked, “As a kid, was it really cool for you that your grandmother was part of ‘Lady and the Tramp’?”

“That’s how my friends knew of her!” Foster-Wells replied.

Lee co-wrote the score to the Disney classic, and was the voices of the Siamese cats; Darling, the mother; and Peg in the dog pound.

In 1958 Lee had her biggest hit with “Fever,” with an arrangement all her own: just bass, drums, and finger snaps:

Richmond said, “She’s keeping so much in. If this (finger snaps) is the only thing to signal what you’re singing about, that’s powerful.”

But to see Peggy Lee live was to be spellbound, as evidenced in this hypnotic performance of “See See Rider,” at Basin Street East in New York:

“She barely moves,” said Foster-Wells. “Like, she just moves a little shoulder. And just her face. And it’s so sexy.”

It was inevitable that Lee would achieve icon status. “She kinda came up with that bob and the glasses,” Foster-Wells said. “And it’s funny, ’cause then I saw Gwen Stefani doing the same thing.”

“Probably not a coincidence!” said Rocca.

She inspired the Muppets character Miss Piggy, originally named Miss Piggy Lee. “She thought that was fantastic. I mean, that pig is glamorous,” Foster-Wells said.

“Miss Piggy is the paragon of glamor,” said Rocca.

And her life was glamorous. She recorded home movies of parties at her Bel Air estate.

But one song spoke to her greatest unfulfilled wish.

Someday we’ll build a home
On a hilltop high, you and I,
Shiny and new, a cottage that two can fill.
And we’ll be pleased to be called
“The folks who live on the hill.”

Foster-Wells said, “‘The Folks Who Live On The Hill,’ that’s her very favorite song. And I think it just paints this picture of an idyllic relationship and growing old together, and always having that soulmate by your side.”

After Dave Barbour, Lee married and divorced three more times, before she died in 2002.

Rocca asked, “And do you think she was ultimately happy?”

“That is a really complicated question,” Foster-Wells replied. “I think she had incredible moments of happiness, but interspersed with incredible loss, heartbreak, disappointment, fear.”

“And where do you think the fear came from?”

“She said, actually, it came from growing up without what really, what she felt was a home.”

Then one day he went away and I thought I’d die, but I didn’t
And when I didn’t, I said to myself
Is that all there is to love?

“But,” Foster-Wells said, “she wouldn’t have been Peggy Lee without this heartache and this pain. And that is what resonates with people, is that truth. She would say to me, ‘This music is gonna outlive me.'”

H.R. McMaster Slams The ‘Illegitimate Political Discourse’ Of Jan. 6 In Dig At RNC