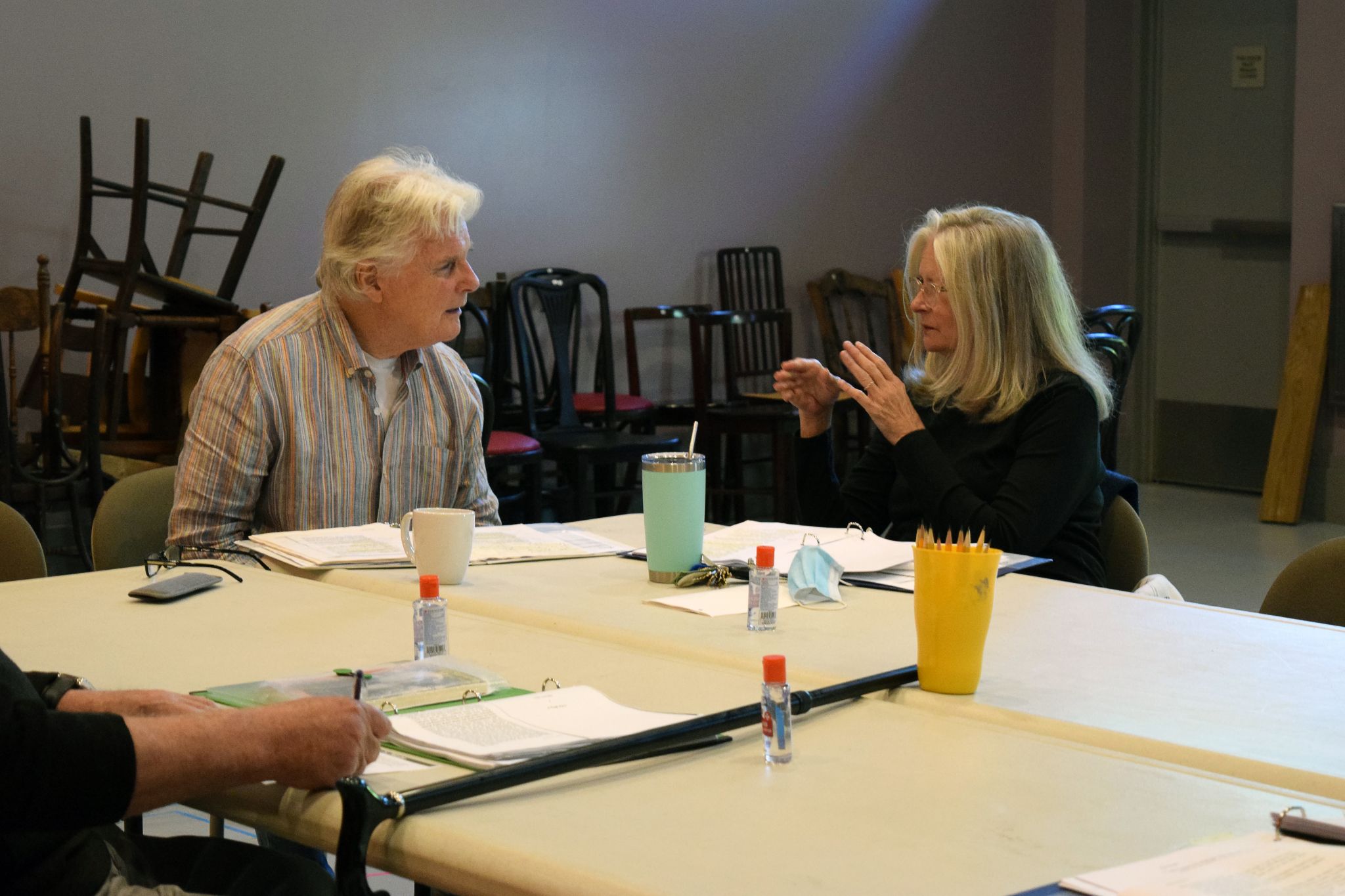 ‘The Chairs’ an absurdist play tailor-made for COVID times

An elderly couple has been living together far from any other human contact. It’s been just the two of them for so many long years that they’ve gone rather batty. But they’ve figured out some things about life. Ready to tell the world of their findings, they plan a really big event, a speech in front of a huge crowd. They’ll need lots of chairs.

In the climactic scene of Eugene Ionesco’s “The Chairs,” which opens Friday at Shakespeare & Co. for a four-week run, the Old Man and Old Woman fill the stage with chairs and courteously seat their imaginary guests one by one. According to director James Warwick, the company could supply as many as 50 unique chairs, but only 29 would fit on the stage of the Tina Packer Playhouse.

It’s been almost 70 years since “The Chairs” debuted in Paris. Considered a classic of absurdist theater, the play is one of those academic touchstones more talked about than actually seen. When Warwick proposed the show to artistic director Allyn Burrows, they agreed that a classic comedy would be a good thing to end the season. Malcolm Ingram and Barbara Sims, both highly respected veteran actors, were cast.

It was only after the show was on the schedule and plans well underway when it dawned on Warwick how pertinent “The Chairs” is to the COVID era. “Ionesco calls it a tragic farce,” says the director. “His characters are cut off from family and friends wondering what will we say to people when or if we ever see them again. Isolated and cut off? Now every one of us knows what that feels like.”

Picture two characters on stage having loopy conversations and growing a bit tired of each other and you may think of “Waiting for Godot,” the archetype of surrealist theater by Samuel Beckett. Though “The Chairs” premiered in April, 1952 and “Godot” the following January, the latter was written in 1948 and 1949. Suffice it to say that the two plays were born of the same culture milieu, post-war Europe.

“I couldn’t find where they met, but Beckett and Ionesco were both in Paris at same time, the late ’40s after the war. Ionesco (born in Romania) married a French girl and they were sure to have met,” says Warwick.

Even though absurdism is vintage stuff at this point, it can still be an odd encounter for contemporary audiences. On the other hand, the comedic aspects of the genre entered the mainstream long ago.

“So many plays remind me of Beckett,” says Warwick. “And ‘Monty Python,’ Benny Hill and ‘Fawlty Towers’ would not have happened if Ionesco had not written this play. It’s very funny and has a lot of theatricality.”

On the final page of the script comes the entrance of another character and it’s a real embodied person, not one more imaginary figure. He’s known as the orator and is supposed to be the one who gives the long heralded speech but he’s a deaf mute. Lots of scholarly essays and theater reviews have probably been written about what Ionesco had in mind here.

But Warwick believes that an attempt at drawing an audience response from the stark display of a handicapped person was no longer appropriate. He eliminated it and is going for another effect through the use of light and sound.

“It made me very uncomfortable,” says Warwick. “He makes noises and stutters. That might have worked 70 years ago, it might have been funny. But if Ionesco was alive today, he would cut that.”

One other change that Warwick made is putting the couple in a lighthouse, where the original has them simply on an island. Most theater artists will say, “I don’t want to give anything away” and withhold certain details. But Warwick was happy to discuss everything on the record, from the number of chairs to how he’s dealing with the orator.

It shows a confidence in the material and in his own artistic choices. Warwick is also trusting that the humor will remain fresh, especially since it’s in good hands with Ingram and Sims, who he describes as “absolutely brilliant.” He adds, “anyone can play drama but it takes a genius to play comedy.”

Discover it® Cash Back Review

In Huge Report on World’s Coral Reefs, Reason to Shudder