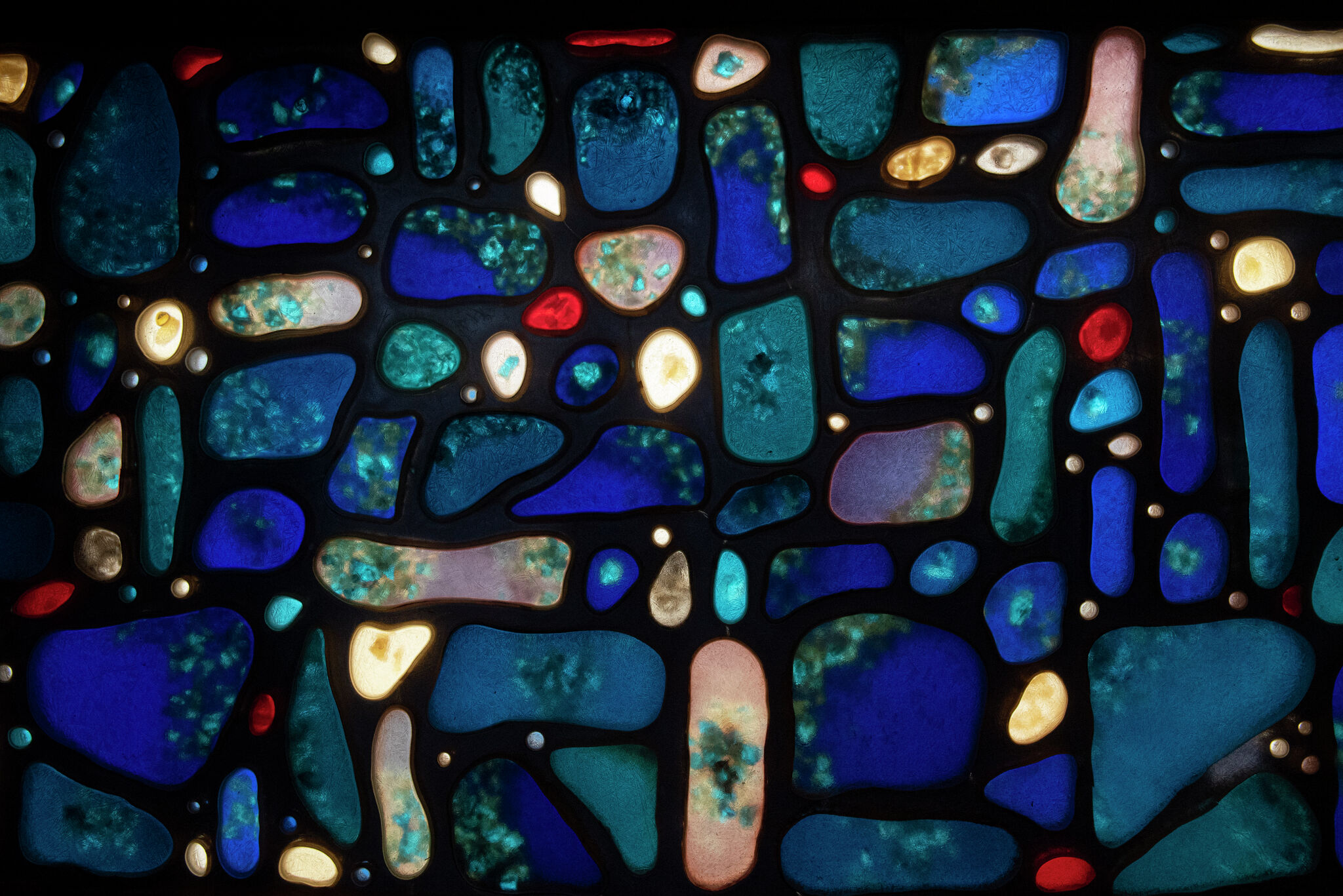 SCHENECTADY  — The eight synagogue windows glow with rich colors that flow across the congregation as the sunlight moves across the sky.

Look closer and it’s clear that Congregation Gates of Heaven’s windows are not mere glass. Each is divided into round, rectangular and pebble sized cells, each one a deep hue. Eight windows depict Jewish holidays and Bible stories. The Rosh Hashanah window’s apples are a ruby color so real, a tiny sparrow flutters outside pecking at it, trying to nibble. The Creation Window features planets, oceans and fish flowing in the cosmos. And there are windows made of fragments of sapphire, azure, indigo and cobalt blue to represent a night sky dotted with gold and silver stars.

Artist Charles Van Atten, a Schenectady native and alum of Boston’s Museum of Fine Arts School, created the windows in 1962 at a time when the great Pablo Picasso was a household name, like Chevy or Superman. (His influence can be detected in beautiful abstractions like a swarm of smoke that looks like a smoky cloud curling around a golden hive in the Rosh Hashanah window). And plastics were still viewed as a space age material with artistic potential.

Van Atten was a well-known colorist who used mosaic plasti-glass in the Gates windows to make the colors deeper than normally seen in stained glass. The designs are composed of cells, like inlays, an inch thick. Instead of painting onto stained glass, Van Atten poured colorants into each cell then added pulverized stained glass. Van Atten proudly described the material as “made from the finest resins and glass fibers, colorants, granulated stained glass and specially constructed 3-D design cells … to provide an atmosphere of brilliant distinction.”

He added that a key advantage of the material is that the colors and designs can be seen from outside the building, not just inside the sanctuary. That was important to the congregants who donated the windows, Henry and Sally Schaffer.

“They wanted someone walking or driving along outside to be able to see and enjoy the illuminated windows. They wanted the beauty to be a gift to the entire community, not just worshippers inside the sanctuary,” Rabbi Matt Cutler explained.

In fact, the colors are as brilliant today as they probably were when newly minted. Gates operations director Josh Cooper-Ginsburg, clearly loves the colorful array. And Cooper-Ginsburg, who is a millennial and gay, also appreciates his synagogue flying the vivid colors of the LGBTQ rainbow flag.

“It’s not just a symbol. Here, it’s an actual welcome,” he said, recalling a recent worship service when several converts to Judaism were welcomed into the congregation. All of them were LGBTQ community members.

He adds that sometimes it can be a struggle to fill the pews, even with COVID distancing adding spaces to the seating. But he’s hopeful that more Gen Zers and millennials longing for a spiritual home or comrades in their fight for social justice will discover Gates of Heaven.

The Gates congregation dates back to 1854 and met in homes and several buildings before moving into the synagogue just off Eastern Parkway in 1956. The windows were installed in 1964, less than 20 years after World War II and the Holocaust. Some of the windows seem to reflect how the fragility of life as well as hope for the future. The Redemption window features a huge menorah under an olive tree where menacing, silver swords are slowly transforming into plowshares.