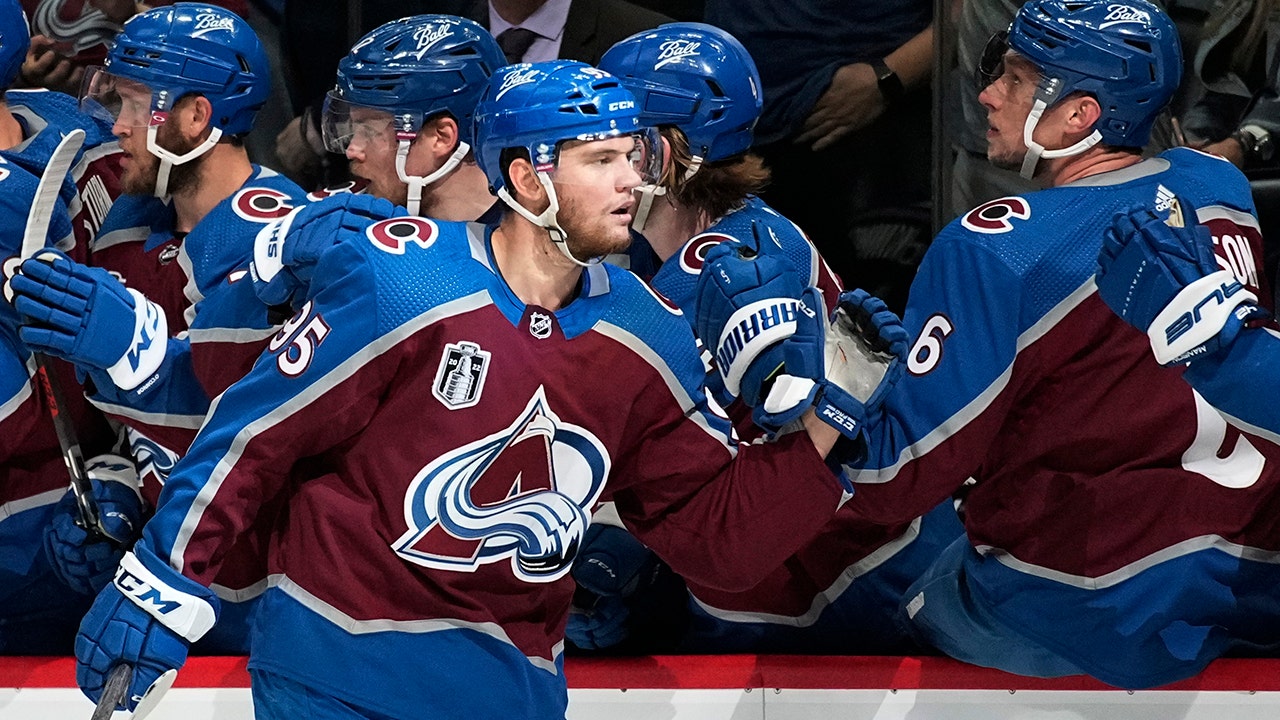 Colorado Avalanche left winger Andre Burakovsky’s status is unknown for Game 3 of the Stanley Cup Final Monday night after he suffered an upper-body injury in Game 2 against the Tampa Bay Lightning.

Burakovsky played the hero in Game 1 when his overtime goal gave Colorado a 4-3 victory. In Saturday’s 7-0 demolition of Tampa Bay, Burakovsky scored in the first period, but he was taken out later in the game with a suspected hand injury.

Andre Burakovsky, #95 of the Colorado Avalanche, celebrates with teammates after scoring a goal against Andrei Vasilevskiy, #88 of the Tampa Bay Lightning, during overtime to win Game One of the 2022 Stanley Cup Final 4-3 at Ball Arena on June 15, 2022 in Denver, Colorado.
(Bruce Bennett/Getty Images)

He did not travel with the team to Florida on Sunday but Colorado coach Jared Bednar said he would join the team Monday ahead of the start of Game 3.

Burakovsky has played 12 games in this year’s Stanley Cup playoffs. He has three goals, five assists and eight points in those games. During the 2021-22 season, he appeared in 80 games and scored 22 goals with 39 assists and had 61 points.

Andre Burakovsky, #95 of the Colorado Avalanche, celebrates with teammates after scoring a goal against Andrei Vasilevskiy, #88 of the Tampa Bay Lightning, during overtime to win Game One of the 2022 Stanley Cup Final 4-3 at Ball Arena on June 15, 2022 in Denver, Colorado.
(Bruce Bennett/Getty Images)

He previously won a Stanley Cup title with the Washington Capitals in 2018.

Burakovsky is not the only injury concern for the Avalanche. Colorado has been playing without Nazem Kadri since the Western Conference final against the Edmonton Oilers.

Bednar said he was unsure of his timeline.

Colorado Avalanche left wing Andre Burakovsky is congratulated for his goal against the Tampa Bay Lightning during the first period in Game 2 of the NHL hockey Stanley Cup Final, Saturday, June 18, 2022, in Denver.
(AP Photo/John Locher)

“Obviously he’s progressing. He’s been skating every day. He’s put his stick into it. He’s starting to shoot pucks now and handle the puck more, catching and releasing it, like passing and shooting. So we’re hopeful we’re going to see him at some point. I’m not sure if it’s Game 3 or Game 4,” Bednar added, via NHL.com.

The Largest Freshwater Fish Ever Is Caught In Cambodia