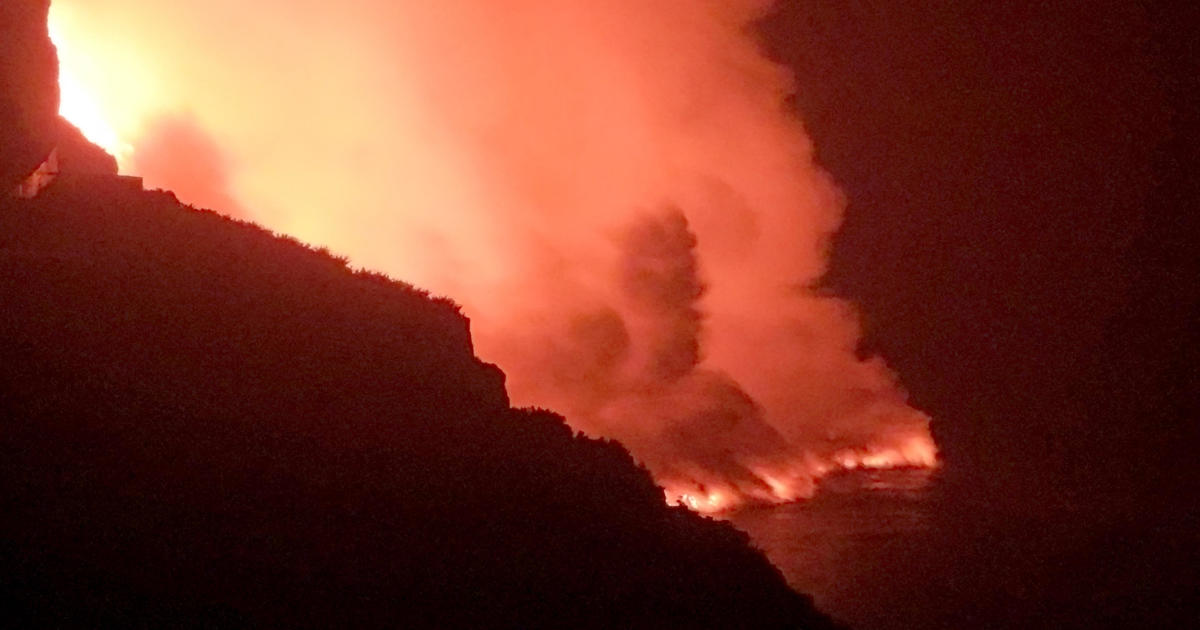 Los Llanos de Aridane, Canary Islands — Lava from a volcano on Spain’s Canary Islands has reached the sea after 10 days of wiping out hundreds of homes and causing the evacuation of thousands of residents. Columns of steam that experts had warned could contain toxic gases shot upward when the bright red molten rock tumbled into the Atlantic Ocean at 11 p.m. on Tuesday.

The area had been evacuated for several days as authorities waited for the lava to reach the water. Its erratic flows and changes in the terrain had slowed its progress. Authorities established a security perimeter of about 2 miles and asked residents in the wider area to remain indoors with windows shut to avoid breathing in gases.

Lava flows from the September 19 eruption of La Palma’s Cumbre Vieja volcano have destroyed at least 589 buildings, mostly homes on the island’s southwestern side that were caught on a slope below the volcano.

No deaths or serious injuries have been reported, thanks to the prompt evacuations of over 6,000 people in the first hours after last week’s eruption.

La Palma, home to about 85,000 people, is part of the volcanic Canary Islands, an archipelago off northwest Africa. The island is roughly 22 miles long and 12 miles wide at its broadest point.

Cleaning crews swept up ash in the island’s capital of Santa Cruz, while more small earthquakes that have rumbled under the volcano for weeks were registered by geologists.

The airport on La Palma, an important tourist destination along with its neighboring islands, remained closed due to a huge ash cloud that Spain’s National Geographic Institute said reached more than four miles above the ground.

However, Laura Garcés, the director of Spain air navigation authority ENAIRE, said that she did not foresee any major problems for other airports on the archipelago or major air routes.

Denial of responsibility! Elite News is an automatic aggregator of the all world’s media. In each content, the hyperlink to the primary source is specified. All trademarks belong to their rightful owners, all materials to their authors. If you are the owner of the content and do not want us to publish your materials, please contact us by email – [email protected]. The content will be deleted within 24 hours.
Canary IslandsCumbre ViejaLa PalmaSpainvolcano
0
Share FacebookTwitterGoogle+ReddItWhatsAppPinterestEmail