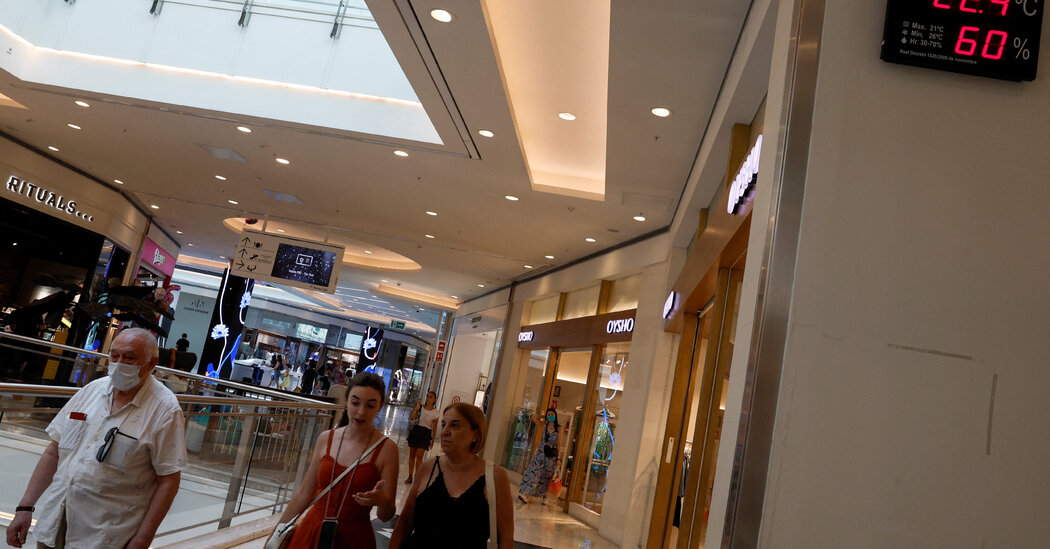 Spain Limits Air-Conditioning to Save Energy

The prospect of office workers, shoppers and commuters sweating through sweltering summer days — as in July when a record-setting heat wave baked the continent — may not be a comfortable thought. But Spain is the latest European country to conclude that the restrictions are necessary, in part to promote energy efficiency but also to reduce the country’s consumption of Russian gas, as called for by the European Union.

“In the context in which the 27 members of the European Union have agreed to voluntarily reduce their gas consumption, the government seeks to minimize the economic and social impact of a possible cut in Russian gas supply,’’ the government said in a news release.

The measure also requires store fronts to turn off their lights by 10 p.m., and to keep their doors closed. The guidelines apply to commercial spaces such as offices, shops, cinemas, shopping centers, cultural spaces and public transport systems and centers such as airports and stations.

The government said the changes could reduce the demand for gas and oil by 5 percent in the short term.

Not all government leaders agreed with the guidelines. Isabel Diaz Ayuso, Madrid’s regional leader, posted on Twitter on Monday that Madrid would not comply.

She added, “This generates insecurity and scares away tourism and consumption.”

Many European countries have long been resistant to air-conditioning, tending to see it as environmentally unfriendly and unnecessary. It is rarely found in homes, but is more common in public spaces.

Still, each successive heat wave creates more demand for air-conditioning, and experts have projected that the demand will only grow, partly as a result of climate change. The International Energy Agency predicted in 2018 that worldwide demand could more than triple by 2050.

Spain’s new restrictions will be in place through Nov. 1, 2023, according to the government.