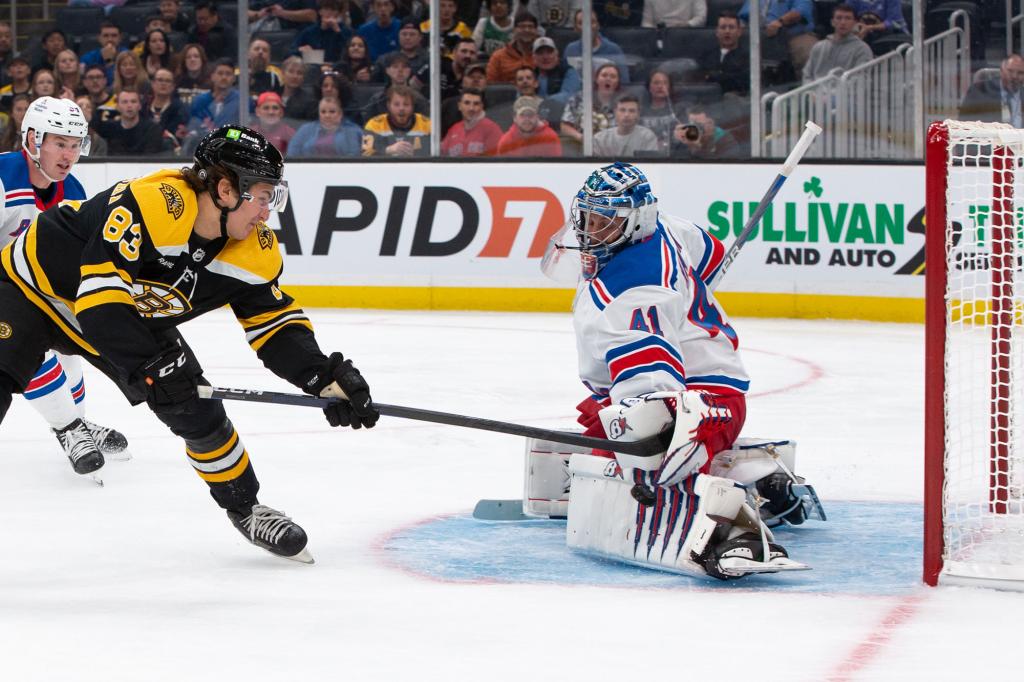 When Chris Drury signed Jaroslav Halak to a one-year deal on the first day of free agency this summer, the Rangers president and general manager said he had heard all about the veteran goaltender’s “Rangers-killer moments.”

There have been quite a few leading up to Halak pulling on his own red, white and blue sweater for the first time. Boston — one of six cities he previously called home during his 16-year NHL career — served as the backdrop when he took the ice Tuesday night for what became a Rangers 3-2 overtime loss to the Bruins in their second preseason game.

Halak — who gave up one goal on 15 shots — split time in net with the other goaltender Drury signed this offseason, Louis Domingue.

In 35 career games against the Rangers, Halak owns a 24-9-1 record, with staggering statistics: Five shutouts, a .927 save percentage and a 2.33 goals-against average. Who could forget the 2017-18 season, when Halak was with the Islanders and faced the Rangers a whopping four times. He won all four, by the way, including a monster 50-save performance on February 15, 2018.

After trading Alexandar Georgiev, who was discontent in a backup role, to the Avalanche hours before the first round of the NHL draft this past summer, the Rangers sought to replace him with an NHL veteran. Reigning Vezina Trophy winner Igor Shesterkin was the only goalie left in the organization with NHL experience once Keith Kinkaid signed with the Bruins in free agency.

Halak’s 39 playoff games of experience and head-turning track record against the Rangers made him an intriguing option.

“I still think I have a couple goals on him, a couple shootout goals and whatnot,” Mika Zibanejad joked. “I feel like every time we’ve played him, we always know it’s going to be a tough night. He is a good goalie. Obviously, every goalie has their team, but it seemed to be no matter what team he was on every time he played us he was great.

“He’s been around for a long time, a lot of experience. I’ve got to agree [with Drury], it’s nice to have him on our side and have that experienced goalie.”

The other benefit to the addition of Halak is the fact that he is no stranger to a backup role. Halak has never competed in more than 59 NHL games in a single season, a number he reached in his first campaign with the Islanders in 2014-15. The dynamic in the locker room should benefit from that, considering Halak signed likely knowing he would be the No. 2 behind Shesterkin.

Halak has also been teammates with some elite NHL netminders, such as Carey Price and Tuukka Rask, so playing behind Shesterkin should be familiar territory.

“He comes in, he’s a veteran guy, I like him,” head coach Gerard Gallant said of Halak. “Let him get some games under his belt, let him get going and we’ll see where it goes. He’s a great goalie and [Louis] Domingue is the same thing. They come in here, they’re veteran goaltenders and that’s what we’re looking for.”