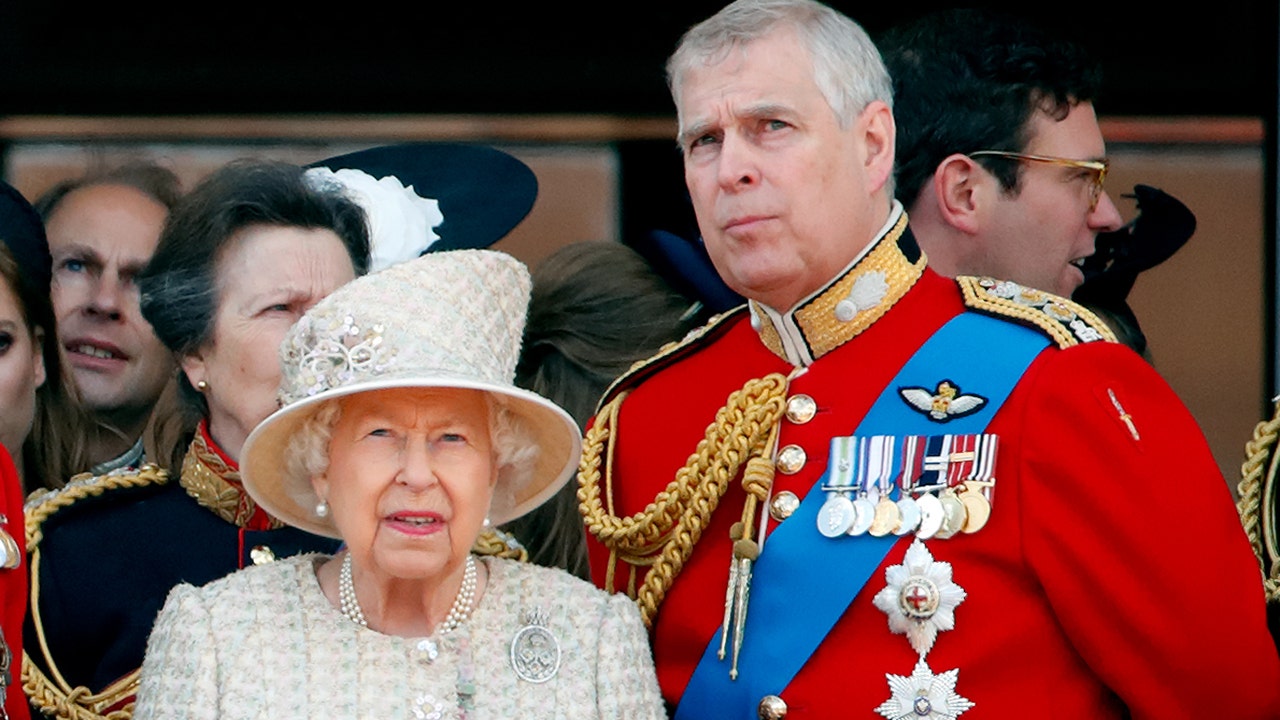 Prince Andrew was notably missing from Monday’s Order of the Garter, one of the oldest royal traditions.

The Duke of York, who is a knight in the Order of the Garter, did not appear in the public procession or any public aspects of the ceremony even though he was listed in the official program.

Royal expert Neil Sean told Fox News Digital that Queen Elizabeth has grown “increasingly concerned” over her son, who stepped back from royal duties in 2019 due to his scandal involving late American financier and convicted sex offender Jeffrey Epstein.

“It’s been told to me that the queen has become increasingly concerned about the welfare and state of mind of her son Andrew and, in particular, he needed a focus, something to look forward to,” Sean explained. “Naturally any mother/ monarch or not would have these feelings.”

Queen Elizabeth II and Prince Andrew, Duke of York watch a flypast from the balcony of Buckingham Palace during Trooping The Colour, the Queen’s annual birthday parade, on June 8, 2019, in London, England. The Duke of York announced later that year that he was stepping down from royal duties.
(Max Mumby)

“He has been spending almost every afternoon in the queen’s company while at Windsor to pass away the hours of what was once a busy, active duke,” he shared. “[This is] how the original invitation became… Andrew, who missed the Platinum Jubilee celebrations after testing positive for COVID, is said to be keen for a return to royal duties and this seemed the ideal way of doing it.”

According to Sean, it was Andrew who thought twice about making a public appearance, knowing that the tabloids would quickly pounce on his arrival.

“He feels that should be reinstated and his position recognized and respected,” said Sean. “But very quietly and without fuss, he personally rescinded the kind gesture from the queen so as not to create… a bad feeling amongst his family members. After all, this was a huge event for Camilla who as the Duchess of Cornwall was installed as a Royal Lady of the Order of the Garter.”

“Andrew also was wise enough to know that if he did attend the focus on her would be taken away,” Sean shared. “He has a good, strong friendship with Camilla, who has been more than kind, compassionate and understanding throughout this whole debacle… The true story is this: He quietly and without fuss agreed to remove himself from the Garter Day and sat back and allowed the press to once again maul him. All the while, his mother the queen awaits to see how her second son will cope with his new life away from royal circles.”

Sean pointed out that the queen isn’t the only supportive figure in Andrew’s life. He shared that his ex-wife Sarah Ferguson and their two daughters, Princess Beatrice and Princess Eugenie, have maintained a strong bond as a family.

“Andrew once again retreated into the background simply [because] he wants to do what is right for the monarch and more so for his mother the queen,” said Sean. “But that is not a headline seller, is it?”

Several royal experts have insisted there were other factors at play surrounding the 62-year-old’s absence.

Omid Scobie, royal editor-at-large for Harper’s Bazaar and co-author of “Finding Freedom,” revealed that the Duke of York’s so-called public comeback was put on ice after a last-minute “family decision.”

HOW THE YOUNG ROYALS HAVE BEEN ‘SCENE STEALERS’ AND ARE ‘MODERNIZING THE MONARCHY’: EXPERT

Interesting to see how close to the wire Andrew’s removal from the Garter Day procession was. His name still features in the order of service that has been handed out for today’s ceremony.

(I’m on vacation now so won’t be tweeting much). https://t.co/w0cZsKpLvt

“After what palace sources have described as a last-minute ‘family decision,’ Prince Andrew will no longer be walking in today’s Garter Day procession or service,” Scobie tweeted. “As a Knight of the Garter, he will still be at the investiture and lunch taking place in Windsor (as will the Queen).”

In a separate tweet, Scobie shared the already-printed Order of Service, which listed Andrew.

“Interesting to see how close to the wire Andrew’s removal from the Garter Day procession was,” Scobie wrote. “His name still features in the order of service that has been handed out for today’s ceremony.”

A spokesperson for Buckingham Palace didn’t immediately respond to Fox News Digital’s request for comment. The Guardian reported that Andrew, as a garter knight, would attend the investiture of new members and the annual lunch, keeping his appearance out of public view.

Prince Charles, Prince of Wales and Prince William, Duke of Cambridge attend the Order Of The Garter Service at St George’s Chapel on June 13, 2022, in Windsor, England. The Order of the Garter is the oldest and most senior Order of Chivalry in Britain, established by King Edward III nearly 700 years ago.
(Photo by Pool/Samir Hussein/WireImage)

Katie Nicholl, Vanity Fair’s royal correspondent, claimed that it was Andrew’s brother Prince Charles, the heir to the throne, who halted his scheduled public appearance.

“During the service, Camilla, Duchess of Cornwall, was installed as a Royal Lady of the Order of the Garter, the highest accolade the queen can bestow on a female family member,” she wrote for the outlet. “It is, according to friends of Camilla, the one title that the duchess has secretly wanted and was thrilled to receive.”

“Prince Charles was keen that his wife’s big moment should not be upstaged by his brother, and Vanity Fair has been told that he was particularly resistant to his brother attending the service and does not want Andrew returning to any official engagements,” Nicholl continued. “The situation with the disgraced duke has caused tension behind the scenes as Andrew is said to be keen to resume public duties now that he believes he has cleared his name.”

Nicholl claimed that Charles and his son William, who is second in line, are adamant that Andrew cannot return to any public roles as they continue to fiercely protect the monarchy.

PRINCE ANDREW WILL NEVER BE RESTORED TO A ‘POSITION ON THE BALCONY’ AFTER SEX ABUSE SETTLEMENT, EXPERT SAYS

A key element of Garter Day is the investing of new Companions with the Order’s Insignia. This is done by The Queen, The Sovereign of the Garter, in the Throne Room.

Today, The Duchess of Cornwall became a Royal Lady of the Order of the Garter. pic.twitter.com/ljIO28r21P

“There are tensions because the Prince of Wales and the Duke of Cambridge want Andrew to be kept away from any public engagements,” a palace source alleged to Nicholl. “They do not want him to return to public life, full stop. The [Platinum] Jubilee was such a success and they were all overwhelmed by how well everything went. They want to ride this wave of goodwill, not have Andrew and his scandals overshadowing the good work the rest of the family is doing.”

A source also alleged to People magazine that Andrew’s withdrawal from the ceremony was a “personal decision” made in consultation with the family.

In March of this year, Andrew reached a multimillion-pound settlement with a woman who accused him of sexual exploitation. He was stripped of his honorary military titles amid the scandal caused by the allegations.

He did not appear on the palace balcony during the Trooping the Colour, which took place during the Platinum Jubilee, marking the queen’s 70 years on the throne. The Duke and Duchess of Sussex also didn’t appear as they stepped back as senior royals in 2020.

Moscow Court Brittney Griner Held in Jail for Another 18 Days