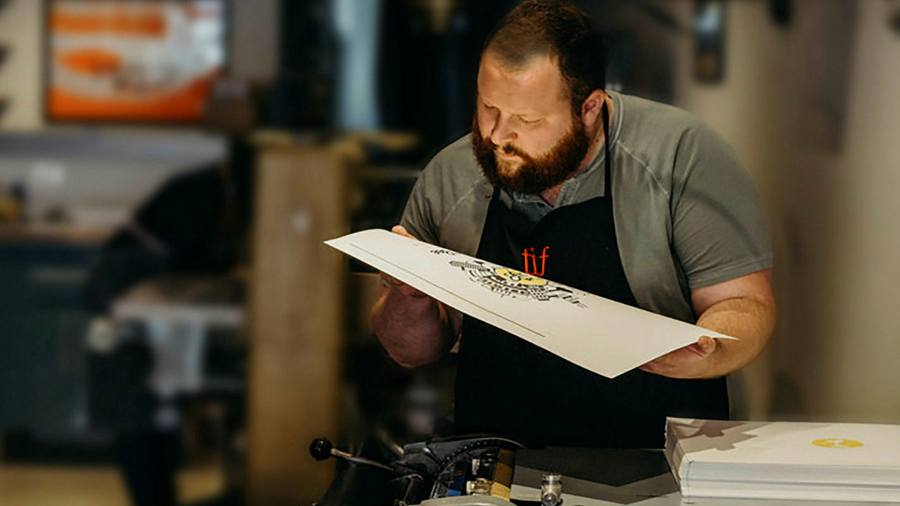 ‘People are hustling’: wedding stationers contend with US paper shortage

A post-coronavirus lockdown revival in weddings has breathed new life into Ryan Basile’s Double Trip Press, a studio in Chicago’s East Lake View neighbourhood where he designs and prints invitations.

But now Basile is contending with a new problem just as orders have started to shoot back up: a crippling paper shortage.

Coping with the shortage has been “terrible”, Basile said. He has had to find new vendors and tell clients who had to postpone weddings because of the Covid-19 pandemic that they must make last-minute adjustments to their stationery.

“The bounceback with this year’s wedding season was way more than we thought,” said Basile.

From shipping logjams and worker shortages to rising prices and fierce competition for basic materials, the woes of the specialised stationery industry encapsulate the pressures threatening the US economy’s post-pandemic recovery as a whole.

With the 2020 and 2021 wedding seasons essentially happening in tandem, demand for speciality paper has increased dramatically. Invitations and other wedding materials — such as menus, orders of ceremony and placecards — are not made from just any paper: they are crafted using premium pulp and are highly customised for colour, texture and thickness.

If the desired paper is out of stock in a certain colour, finding a similar one might mean switching paper type, which in turn could lead to a change in printing style. Sometimes it means overhauling the design entirely.

“All of our suppliers are back-ordered for months on end,” said Robyn Platoni, owner of Chick Invitations, a Philadelphia wedding stationery studio that recently had to source paper from as many as five vendors to complete one order.

Crane’s Lettra, a cotton paper manufactured by Mohawk Fine Papers and a favourite among stationers, has been especially hard to come by. “We have the largest backlog we’ve ever had,” said Mohawk chief executive Thomas O’Connor.

Mohawk has two mills in the Albany, New York area, and about 550 employees. Though it has not struggled to secure raw materials, most of which it sources domestically, finding staff has been a real problem, the company said.

“We’ve had a tremendous[ly difficult] time trying to hire people,” O’Connor said, adding that the issue has hindered the mills’ ability to operate at 100 per cent capacity. They are currently at about 75 per cent.

Additionally, Mohawk’s raw materials and freight costs “have all gone up a great deal”.

Overall, “paper pricing has basically gone straight up” in the past six months, said Paul Quinn, an analyst at RBC Capital Markets. “It’s at the highest it’s ever been” on a nominal basis, he added.

The price of uncoated sheet paper — the kind used in office printers — has increased 13 per cent in the past six months, he said, to $1,065 per tonne in August. Total demand in North America for printing and writing paper in June 2021 was 990,000 tonnes, up 30 per cent year-to-date, according to data from the Pulp and Paper Products Council.

Demand is also growing for paper to make packaging, as box volumes have spiked with the increase in online ordering that came with the pandemic, said Mark Wilde, an analyst at BMO Capital Markets.

“It’s probably the tightest market I’ve seen in over 20 years,” Wilde added. While part of the price increase is inflationary, “the other part is that companies are taking advantage of the really tight markets”.

Duke Reich, president of Reich Paper, has been saddled with soaring import costs. The company makes Savoy paper, another stationer favourite, in Europe.

Importing one 40-foot container filled with Savoy used to cost Reich $4,000 to $4,500 door to door. Now it costs more than $9,000. Those containers are also taking longer to arrive, as they get caught up in port snarls.

“We’ve been without inventory for a while. We get in a full 40-foot container, and it goes out the door,” said Reich. “We’re quoting January delivery dates for orders now. So basically, things are taking at least twice as long as they normally have.”

Another potential complication is on the horizon: paper supply in North America could reduce further with “significant planned maintenance outages” at mills throughout September and October, according to a September 2021 market pulp monthly report from Brian McClay & Associates.

To combat the shortage, those in the wedding invitation world are extending project timelines and trying to be more creative.

Schenk used to be able to complete an order using two or three vendors but now she is “shipping from seven different suppliers, and one of those might be a friend who happened to have the 20 [final] envelopes that I needed,” she said.

Nancy Paravano, who owns Philadelphia-area printer Paravano Company with her husband Philip, has been “duplexing”: sticking two thinner sheets together by hand in the absence of thicker paper.

Before introducing a client to a stationer, she “had to go to three or four separate stationers to find one who could handle the project”, she said, adding that the most important thing was not to load clients with any additional pre-wedding stress.

Basile said: “My number one rule in here is: don’t mess with the bride.”

Chemistry Nobel Awarded for Work in a ‘Difficult Art’