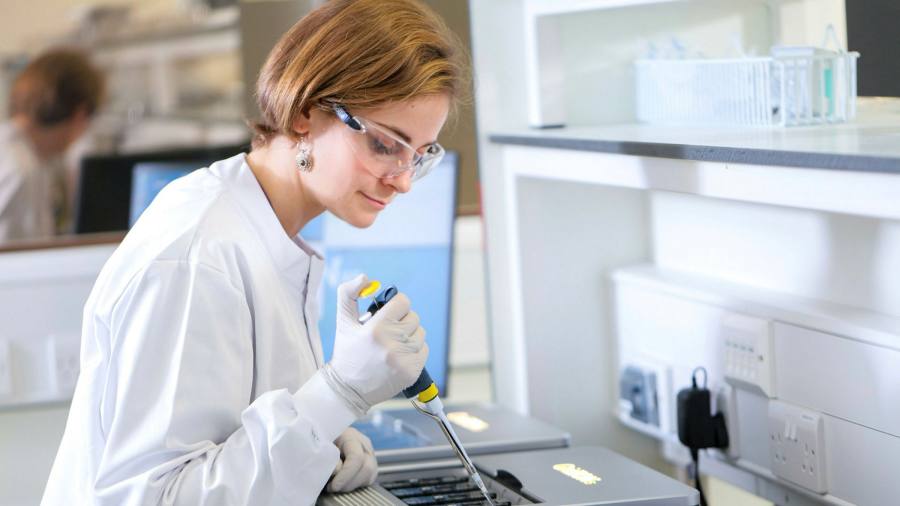 Shares in Oxford Nanopore surged more than 40 per cent after its initial public offering in London, topping a transformative 18 months for the UK genomics company that has helped researchers track the pandemic.

The company, which makes devices dubbed the “smartphone of sequencing” to analyse Covid-19 variants, had priced its shares at 425p. By market close on Thursday the stock was 43 per cent higher at 607p, giving it a market capitalisation of £4.8bn, up £1.3bn.

It is the eighth-biggest listing in London this year and the third-largest biotech float globally in 2021, according to Refinitiv. Analysts have called it a “game changer”, looking to “democratise and decentralise” the genomics market dominated by a single company, Illumina.

The IPO is a significant test for the sector’s attraction to investors in London. Many other British pharmaceutical and life-sciences companies have listed on New York’s tech-focused Nasdaq exchange.

“We are only in the foothills of a long and exciting journey,” said Gordon Sanghera, chief executive of Oxford Nanopore. “We are living on the cusp of the genomic era” and the group’s technology would open up many “possibilities for positive impact”.

Oxford Nanopore was spun out of Oxford university in 2005, and had a valuation of £2.4bn when it last raised funds in May. Its pocket-sized variant sequencing devices have been used in 85 countries to track the evolution of coronavirus.

Analysts said that portability, in contrast to rivals’ far larger machines, could open up a bigger market for sequencing, which is worth billions of dollars a year.

“It’s essentially the smartphone of sequencing . . . in a world of mainframes,” said Stefan Hamill, life-sciences analyst at Numis, whose company was among Oxford Nanopore’s IPO bookrunners. “It’s a globally leading technology and it’s real technology.”

Other London tech IPOs have received a mixed response this year. Shares in cyber security group Darktrace have more than tripled since their debut in April, while food app Deliveroo is still trading at more than a fifth below its IPO price after six months on the public market.

After a long drought for tech listings, Hamill said London had “good momentum”, with more IPOs in the pipeline.

He added that Oxford Nanopore was “one of the biggest pops we’ve seen” for a new London listing. “There’s an incredible amount of demand [for the stock] and it’s coming from all over the world.”

That will bolster the hopes of Sanghera and others that London can become a destination to rival New York for life-sciences IPOs, overcoming concerns about more burdensome regulations for new listings and a sense that British investors are more risk averse.

“It’s an urban myth that London can’t compete with Nasdaq on a capital raising like this,” Hamill said. “There’s no reason why we can’t build these companies here.”

Oxford Nanopore’s IPO involved the sale of 123.4m shares, which will raise a total of £524m. Of that, there were 82.4m new shares, raising £350m, and 41m shares sold by existing investors. It has an additional 18.5m new shares available as the overallotment option.

‘The Guilty’ review: Jake Gyllenhaal stars as a 911 operator in a Netflix remake of the Danish film