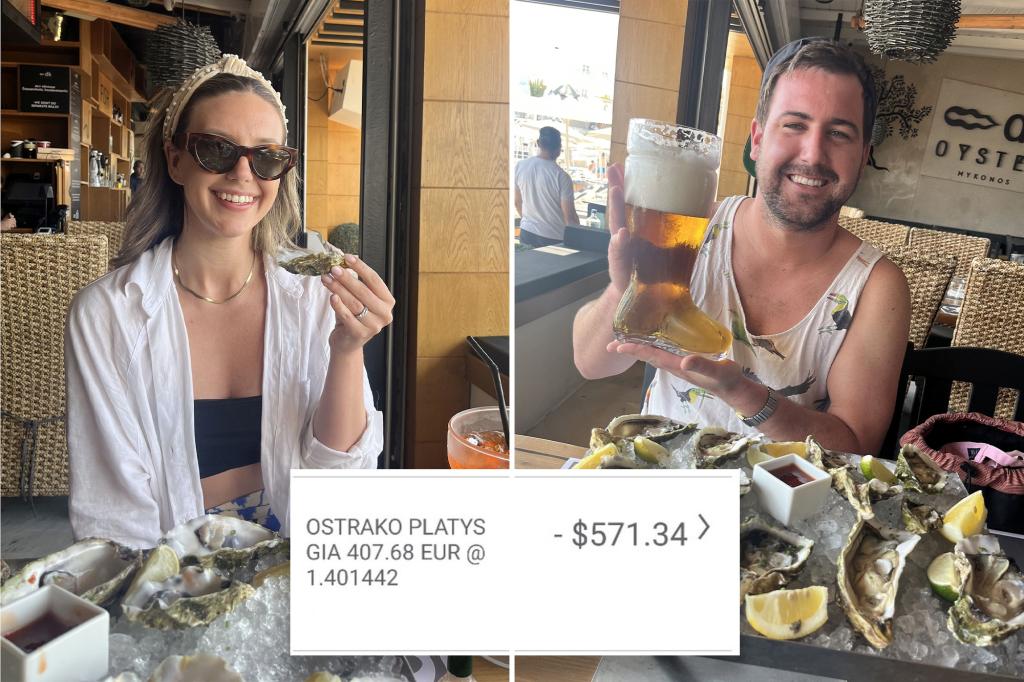 A newlywed couple was outraged to learn they were stuck with a $570 bill after being pressured to enjoy “a quick snack” while on their honeymoon.

Lindsay Breen and her husband Alex, both 30, were left in shock after being surprised by the outrageous bill at DK Oyster in Mykonos.

The couple, who hails from Toronto, Canada, was exploring the picturesque town when they decided to pop into one of the local restaurants for light bites and a drink.

“We went to the oyster bar for a bite to eat and a drink,” Lindsay explained.

“They immediately said ‘do you want oysters?’ They were very presumptuous. We said yes and he said ‘a dozen?’ so we said yes because a dozen is a typical order.”

The restaurant worker continued to give Lindsay a hard time about bringing out a menu. “I didn’t know how it was so difficult to see what they had,” she said.

The server eventually brought the couple “what they consider their cocktail menu” which was simply “a laminated piece of paper with the types of alcohol listed but it didn’t have the brand or the drinks” listed.

Lindsay finally gave in and ordered an Aperol spritz “because they clearly didn’t have a menu that they wanted to give me.”

“He finally came back with comically large drinks so we were thinking it’s their funny thing that the bar does because we didn’t ask for an extra-large cocktail,” she remembered.

“He was very much lurking around the table the whole time. He was always around,” she said of the aggressive restaurant worker.

“When we’d finished the oysters, he was trying to get us to have crab legs and thank goodness we didn’t. He said ‘you know what would go really nice with these oysters? Crab legs. Shall I get some over for you guys?’ and we said no, we just wanted a quick snack and a drink.”

The new bride remembered that Alex claimed to see a menu on his way back from the bathroom listing oysters for 29 dollars but Lindsay couldn’t believe it.

“We had already eaten the oysters so we thought, ‘Oh God, what are we getting ourselves into with this bill?’” she said.

“The guy came back with a huge trolley of desserts and he says, ‘So, of course, we’re having cake today’ and starts putting different desserts on our table and we said we didn’t want them and he started getting offended that we didn’t want to take them so I can see how people would be pressured to take more.”

“As we kept refusing what he was trying to give us he was getting more frustrated.”

After finishing their snack and “comically large drinks,” the couple was ready to pay and continue on with their day.

“When we were ready to leave, I went to the washroom and they had my husband go into a back room to pay which is sketchy,” Lindsay remembered.

“They gave him the bill which was over 400 euros. He was shocked and asked for a breakdown. They had a computer screen that they turned to him and it was all in Greek but we don’t speak Greek.”

Although he was completely shocked by the large bill, Alex paid without any issues after he got a “sketchy vibe” and “didn’t want to get himself in a bad situation.”

“He definitely felt intimidated and he’s the friendliest guy so even if the bill was double he probably would have paid it to avoid any problems,” Lindsay admitted.

“It was pretty crazy. I’m glad in hindsight that we didn’t cause an argument or refuse to pay because it could have ended up worse for us. They know when you’re tourists they take advantage.”

The couple was in disbelief as they walked away from the over-priced beach club. “It’s so crazy to pay that for a snack,” Lindsay insisted. “We were really shocked, especially because we’d had some really nice meals in Italy and we’re willing to spend when it’s justified but we didn’t get much.”

Despite the shock, the couple is just glad they were able to foot the bill and charge the rest of their large expenses on their credit card.

“I can imagine how someone would end up with no money. It’s not an ideal way to spend our money but we’re fortunate we could pay,” she said.

“On holiday, we like to stumble in wherever looks good, we don’t really research but we’ll probably start. They have a similar atmosphere to the other restaurants to blend in and make people think it’ll be a similar price,” Lindsay explained.

“It was less busy than the other restaurants,” she admitted.

“They all had their menus posted outside which is typical for that type of area. They were all similar price points, obviously a little bit expensive but fair for what you were getting.”

She and Alex quickly glanced at the menu outside DK Oyster in Mykonos and believe the oysters were listed at nine euros but later learned that the restaurant priced their menu based on items per 100g.

“So it says calamari is 29 dollars but in fine print, it will say that’s for 100g of calamari so your bill comes up to 300 euros,” she said. “I’m so happy we didn’t go there hungry and order a proper lunch.”

The Breens aren’t the first couple to be scammed by this oceanfront restaurant in Greece.

“Next door, a store owner said he was so sorry to hear that we went,” Lindsay said. “He said he warns everyone that goes into the store to stay away from there and it doesn’t represent who the Greek people are.”

DK Oyster’s TripAdvisor rating is a measly 2.5 stars accumulated from their 1,455 ratings. The page is flooded with 1-star accounts of experiences similar to the Breens’.

“DO NOT GO HERE! Absolutely disgusting behavior from manager and staff. Cocktails are awful and charged €125 plus service for 2! Waiters made us feel very uncomfortable,” one review reads.

“Wish we looked at the reviews before! This place is a joke! 350 euros for 4 drinks!! I would definitely NOT recommend going here. Please save your euros!” another reads.

But the staff at the tourist trap does not seem to be very apologetic and often mocks their guests who leave bad reviews.

“Thank you for taking the time to post your review, but could you please clarify the exact reason of your disappointment? The prices you mention sound correct, so I would like to understand what the problem was,” a reply reads.

“The drinks were not what you expected, the setting or the service? Your opinion is important to us. So, we would appreciate it if you would take a few minutes to clarify.”

They also mocked customers who claimed to be intimidated into paying the exorbitant prices: “Let me see if I got it right: You were abducted from the beach and shoved by force into a luxury restaurant.”

After all the commotion the restaurant has cooked up, they were recently fined more than $30,000 for scamming two American tourists, the Greek City Times reported.

This serves as a lesson to those who look at the menu and think “It’s all Greek to me” — double check the prices before you sit down!

Roasted red bell pepper and zucchini salad with burrata is…