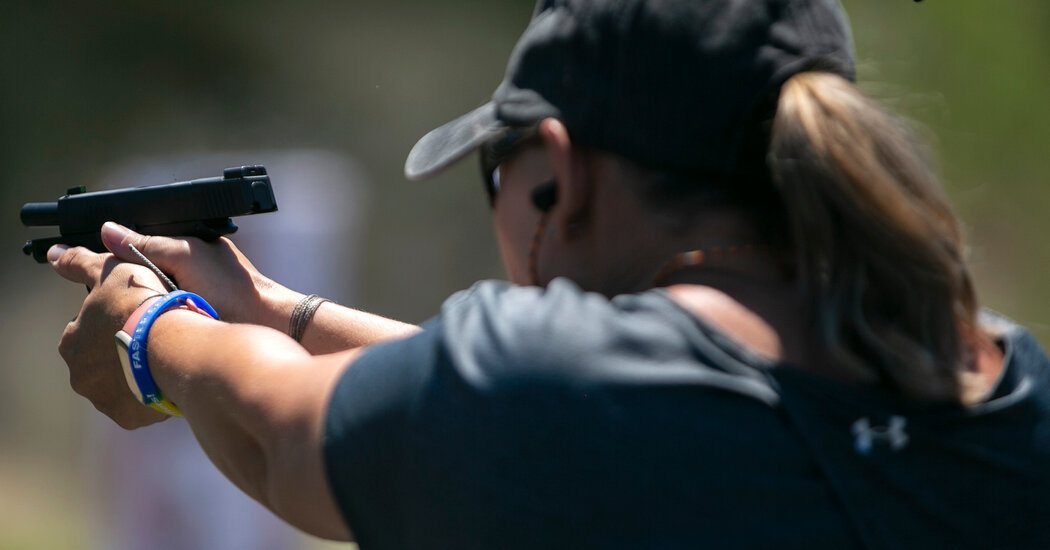 Re “Armed. And Ready to Teach Kindergarten” (front page, July 31):

As both a parent of school-age children and an American citizen with common-sense values, I am deeply disturbed by this article. Creating a school rapid response force of ill-trained and most likely underprepared and timid teachers, administrators and janitors to do what nearly 400 law enforcement officials armed with automatic high-capacity rifles could not do in Uvalde seems rather farcical and misguided.

It’s as if the proverbial “good guy with a gun” is now the new tactic being deployed to act where trained officials so blatantly and tragically failed.

Evidence shows that successful outcomes from such tactics in mass shooting events are extremely rare. And so, yet again we ignore the elephant in the room (hundreds of millions of guns, lax gun laws, the N.R.A. lobby) and instead of legislating safeguards for the innocent, we meekly and quietly give a teacher a 24-hour certification and a Glock, which unless it is in the hands of an expert weapons handler becomes essentially a pea shooter against a maniac armed with an automatic rifle.

Insane gun laws that allow such frequent mass shootings are now being cloaked in stupid and poorly thought out “solutions” in this once great country.

As a retired elementary school teacher, I felt a mixture of disbelief and horror after reading this article! What is wrong with our country that makes it acceptable for teachers to carry and possibly use a loaded weapon?

Classrooms are places where the environment should be safe and comfortable for learning. Will having educators ready to shoot create the atmosphere that we want for our children?

Rather than terrified teachers feeling compelled to learn to handle a gun for their own safety and the safety of the children in their care, why don’t teachers simply refuse to go to school until these semiautomatic rifles are completely banned and off the streets?

Teachers taught over Zoom during one plague; they can do it again during this current plague.

Giving firearms to civilians with minimal training and experience is a nationwide disaster in the making. The lives of our children, young adults, teachers and administrators deserve a more thoughtful, careful response to the epidemic of school shootings. Not reckless, shoot-from-the-hip policies.

Victor Caliman
Kings Park, N.Y.
The writer is a former teacher and principal.

Analyzing Russia, and the Man Who Runs It

Re “Putin Performs for Russia, and Ukraine Is the Stage,” by Peter Pomerantsev (Sunday Opinion, July 31):

Mr. Pomerantsev’s excellent analysis of President Vladimir Putin’s manipulation of the Russian “cycle of humiliation and aggression” reminds me of the Russian folk saying “Never carry garbage outside the hut.”

The Russians will never acknowledge or memorialize their self-inflicted pain because they refuse to present their failures and shortcomings to the outside world. Russians believe that doing so would risk allowing foreigners to exploit such vulnerabilities.

Mikhail Gorbachev, the last Soviet leader, remains vilified in Russian society for his adoption of glasnost, which would have allowed public debate and scrutiny of Russian failures over the years and which the traditionalists opposed.

Melvin A. Goodman
Bethesda, Md.
The writer, a former C.I.A. Russia analyst, is a senior fellow at the Center for International Policy in Washington and an adjunct professor at Johns Hopkins University.

When will the media label Vladimir Putin as who he is: the 21st-century Hitler? The sooner the better, since that identification could reach the Russian citizens who are being propagandized.

Republican Governors: A Look at the Record

Just one example: Of the states with the highest rates of Covid deaths, the top six are led by Republican governors.

Gubernatorial effectiveness is measured by a lot more than just some cherry-picked data.

This essay presents an interesting contrast with an Upshot article the day before, “Ragged Safety Net Is Weaker in States That Ban Abortion.” Three of the Republican governors of whom Liz Mair is most complimentary — Greg Abbott, Doug Ducey and Asa Hutchinson — preside over states that have among the worst records in the country on things like child poverty and maternal mortality.

Has the price paid for the lower taxes and other policies they have implemented been worth it?

Reading this story about Kentuckians is heart-wrenching. Living this story must be beyond heartbreaking. The death, the destruction and the lack of resources are a living nightmare.

It is insidious that the coal production that adversely affected people’s health and the surrounding countryside contributed to an unstable climate that causes such heavy rains and serious flooding. Unfortunately, these climate events will continue to destabilize communities if global warming is left to fester.

Lives and livelihoods need rescuing in eastern Kentucky. Beyond the cleanup, these folks need jobs, housing, medical services and good schools. Land damaged by coal mining needs to be rescued.

Our fellow Americans need help, and we as a nation need to answer their call. And we need to pass legislation to mitigate the climate crisis. We have a lot on our plate, but we can do this!

Mixed Martial Arts: This Is a ‘Sport’?

In opposing the expansion of mixed martial arts, Senator John McCain — hardly the squeamish sort — described their bouts as the equivalent of “human cockfighting.” The current ubiquity of this “sport” is yet another signpost in the moral decline of our society.

The Inside Story of Carlos Ghosn’s Brazen Escape From Japan

Rangers will be more dependent than ever on their youngsters

‘Hopefully My Mom Is Free From Pain’: Anne…