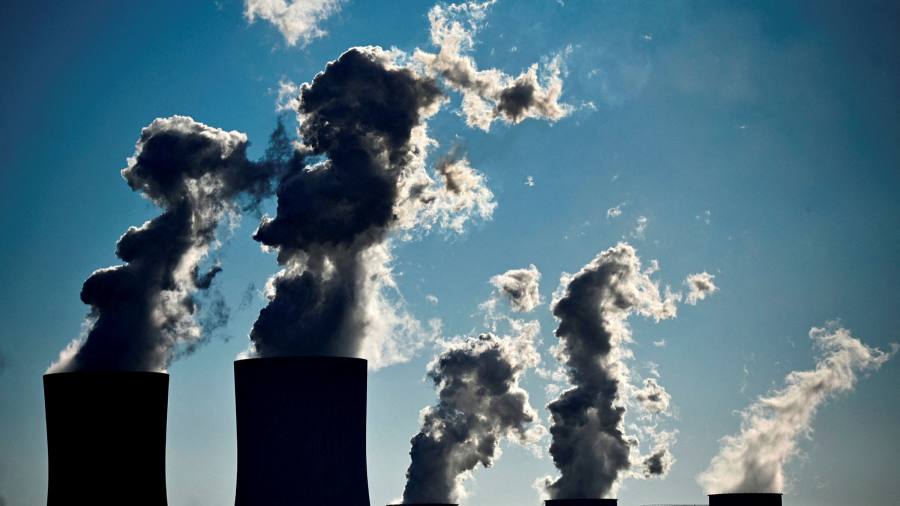 Net zero gets ever more distant

This article is an on-site version of our Energy Source newsletter. Sign up here to get the newsletter sent straight to your inbox every Tuesday and Thursday

Welcome to another Energy Source.

In our first note today, Myles picks up a survey from management consultancy Bain, which finds that executives are gloomier about the pace of the energy transition.

Our second is on efforts to decarbonise Canada’s oil sands, which BP has finally exited.

In Data Drill, Amanda notes a study that shows the CO₂ emissions from LNG shipping could be lower than thought, and easily reduced further still — significant news for a fossil fuel in growing demand due to the war in Ukraine.

PS Join hydrogen CEOs, policymakers and investors on June 16 at the FT Hydrogen Summit in London and online to discuss the opportunities and challenges in harnessing the full power of hydrogen. Register here.

It may still be decades yet until we hit net zero

The world will be a very different place in 2050: China and India will probably have knocked the US economy into third place in the global rankings. New Zealand says it will have killed off all its rats.

What will not have happened, according to a poll of energy executives released today, is the world reaching net zero emissions.

In survey of over 1,000 senior industry players, carried out by consultancy Bain, executives believe that on average it will be 2057 before the world hits net zero. One in four say that target won’t be hit until after 2070.

The UN’s Intergovernmental Panel on Climate Change has called for emissions to be cut to net zero by mid-century if the world is to keep global warming in check. Getting anywhere close would require a root and branch overhaul of the way energy is produced across the world. The International Energy Agency says it would require an immediate cessation of new oil and gas development.

So the fact that the movers and shakers in the sector don’t anticipate it happening on schedule is perhaps no surprise.

But the executives surveyed by Bain say missing the target will not be for want of trying on their own part, but because of other industry players’ failure to pull their weight.

“They are very optimistic about their own actions, what their companies are doing, but less sure about the rest of the industry — their peers — and less sure about the support of the government,” Joe Scalise, Bain’s global head of energy and natural resources, told ES.

Companies are increasing the amount of cash they are ploughing into the transition too. About 23 per cent of capital is being allocated to new growth areas (which includes low carbon businesses such as carbon capture, renewables and hydrogen), up from 16 per cent two years ago.

“They’re actually putting their money where their mouth is and beginning to invest their capital in the energy transition to drive it forward,” said Scalise.

But when it comes down to it, any shift in trajectory is being driven by returns. Bain found separately that investors in the sector are by and large not restricting investments based on environmental, social and governance criteria.

Sixty-two per cent of utility investors and 84 per cent of oil and gas investors do not have — and do not plan to introduce — rules to include only companies that meet specific ESG ratings thresholds in their portfolios.

That chimes with a growing scepticism of ESG ratings in the investment world.

That is important, given that the decarbonisation push in most countries tends to lack cohesive policy — such as carbon pricing — meaning much comes down to individual company decisions.

“This is the kind of disorder that we’re going to see as we go through, where you’re asking individual companies to make up their own rules as they go,” said Scalise. “There’s not yet a sense of order in this environment.” (Myles McCormick)

BP is selling its remaining asset in Canada’s oil sands — the latest retreat by a European oil supermajor from Alberta’s contentious projects. And Cenovus Energy is buying — the latest sign of local Canadian companies doubling down on a developments that are:

It is the high emissions from the oil sands that have brought them so much opposition, culminating in the cancellation of the Keystone XL pipeline project last year.

As I wrote in my Big Read last week, producers in Alberta think new energy security anxieties following Russia’s invasion of Ukraine may bring a reappraisal of their sector.

Oil sands producers and their supporters are baffled, for example, that the US government has pressed Saudi Arabia for more crude and has sought a diplomatic breakthrough with Venezuela and Iran to allow more of their sanctioned oil back on to the market, but has made no such overtures to Canada — a close ally and one of the world’s most peaceful democracies.

“It just makes absolutely no sense for the US to look to jurisdictions like Russia, Venezuela, or Saudi Arabia, for reliable supplies of oil when, you know, we’re just north of you,” Cenovus chief executive Alex Pourbaix told me while I was in Alberta reporting last month.

The companies say they have a plan to fix their high-emissions production and render operations net zero emissions by 2050, starting by cutting about a third of the projects’ greenhouse gas pollution by 2030.

It’s a more modest cut than Justin Trudeau’s federal government wants from them, but if oil producers manage to hit their own emissions targets by then, Canadian crude will look a lot more attractive. It will have gone from the dirtiest oil in the world to some of its cleanest, emitting less CO₂ per barrel than American shale companies, say producers.

“Sometime in the next eight or 10 years . . . the Canadian industry is going to be lower on a carbon-intensity-per-barrel basis than the US shale industry,” believes Adam Waterous, whose Waterous Energy Fund has been producing assets in the oil sands. “There’ll be heavy pressure from the United States to import Canadian barrels to help decarbonise the US energy system.”

That is some claim for an industry whose production growth has brought an almost relentless increase in carbon pollution in recent decades.

And hurdles remain. Pourbaix praised a federal tax credit aimed at helping develop the carbon capture component of this plan. But at an eye-watering C$75bn ($50bn) price tag for the project, the companies also want Alberta’s provincial government to help.

Jason Kenney, the province’s premier (for now), is fighting federal carbon mandates. When I asked him if the province would help pay to decarbonise the oil sands, he didn’t seem keen.

“These companies are generating collectively tends of billions of dollars in profits . . . [but] are not investing it in new greenfield developments to create jobs,” he said. His government “can’t responsibly ask taxpayers” to fund more industry carbon management.

Oil sands groups see the technology as a way to retain a “social licence” to continue operating in a decarbonising world, says Julia Levin, at Canada’s Environmental Defence. “But I don’t think the companies have any intention of spending a cent of their own money on it.”

The companies’ own deadline to decarbonise is less than eight years off. So progress — or the lack of it — will be obvious soon.

“They’ve been talking about decarbonisation for 10 years,” says Kevin Birn, a vice-president in S&P Global Commodity Insights’ GHG Estimation group. “They have to move on to material large-scale demonstrations and things that will knock out megatonnes.”

And fast. Canada may be the planet’s friendliest and most reliable crude producer, but if it can’t green the supply, the world will turn to lower-carbon sources.

“It’s about de-risking your company to investors [in an energy transition], because falling demand will leave the higher carbon oil more exposed.” (Derek Brower)

Carbon dioxide emissions from LNG shipping are 10 to 33 per cent lower than previously thought, says a new study from the journal Environmental Science & Technology, but methane emissions are 60 per cent higher.

And operating LNG engines at higher loads could slash methane emissions by more than half due to increased efficiency, the study says.

“This study helps to fill a big data gap when it comes to methane emissions from LNG shipping,” said Paul Balcombe, the study’s lead author. “It’s vital that we understand what their emissions profile is at a time when LNG imports are likely to grow substantially to reduce Europe’s reliance on Russian gas.” (Amanda Chu)

Energy Source is a twice-weekly energy newsletter from the Financial Times. It is written and edited by Derek Brower, Myles McCormick, Justin Jacobs, Amanda Chu and Emily Goldberg.

Trade Secrets — A must-read on the changing face of international trade and globalisation. Sign up here

A Carl Paladino win would be disastrous