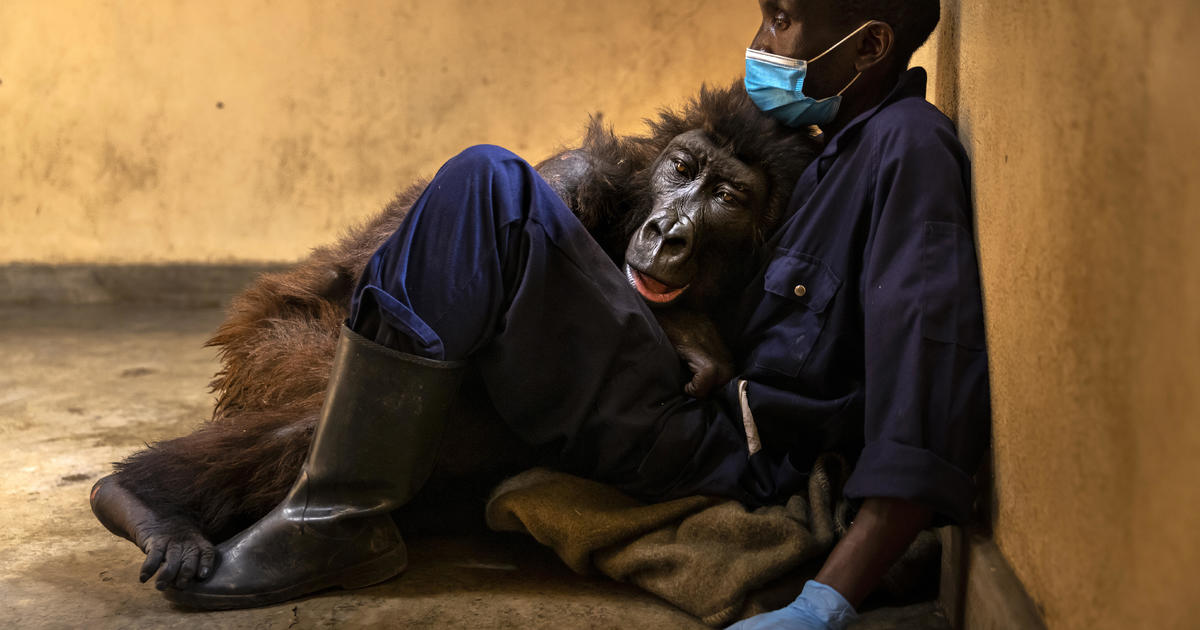 Ndakasi, mountain gorilla in famous selfie, dies in arms of caretaker who saved her

A beloved mountain gorilla who in 2019 struck a pose in a selfie seen around the world has died at the age of 14. The Virunga National Park in the Democratic Republic of Congo said that Ndakasi died last month after a prolonged illness.

“It is with heartfelt sadness that Virunga announces the death of beloved orphaned mountain gorilla, Ndakasi, who had been under the care of the Park’s Senkwekwe Center for more than a decade,” the park said, adding she took her final breath in the arms of her caretaker, Andre Bauma.

Bauma said it was “privilege to support and care for such a loving creature.”

“I loved her like a child and her cheerful personality brought a smile to my face every time I interacted with her,” he said. “She will be missed by all of us at Virunga but we are forever grateful for the richness Ndakasi brought to our lives during her time at Senkwekwe.”

Ndakasi was only two months old when Virunga rangers found her in 2007 clinging to the body of her mother, who was gunned down hours earlier by an armed militia, according to the park. They took her in and transferred her to a rescue center in Goma, where she first met Bauma. He held then-baby Ndakasi against his bare chest for the entire night – and a bond was formed.

The gorilla rehabbed, but was too vulnerable to return to the wild, the park said. She was eventually transferred to the Senkwekwe Center and lived there peacefully for more than 11 years.

During Ndakasi’s time at the park, her personality shined in several shows and films, including the documentary, “Virunga.” But she is best known for striking an amusing pose behind a caretaker in a 2019 selfie with her friend, Ndeze. Both of the gorillas appear standing on their two feet and bellies out.

In a 2019 interview with BBC News, the park’s deputy director, Innocent Mburanumwe, said the gorillas had learned to imitate their caretakers, who looked after them since they were infants. According to Mburanumwe, they see the park rangers as their parents because the gorillas’ mothers were both killed in 2007.

The massacres of Ndakasi’s family and other gorillas prompted Congolese authorities to implement security reforms at the park.

The park said Ndakasi was born at a time when the global population of mountain gorillas was “fragile and critically endangered.” However, the species has grown by 47% — from 720 individuals in 2007 to an estimated 1,063 in 2021 — over the course of Ndakasi’s life.

Christopher Brito is a social media producer and trending writer for CBS News, focusing on sports and stories that involve issues of race and culture.

Denial of responsibility! Elite News is an automatic aggregator of the all world’s media. In each content, the hyperlink to the primary source is specified. All trademarks belong to their rightful owners, all materials to their authors. If you are the owner of the content and do not want us to publish your materials, please contact us by email – [email protected]. The content will be deleted within 24 hours.
cause deathdeathgorillasndakasiselfie
0
Share FacebookTwitterGoogle+ReddItWhatsAppPinterestEmail