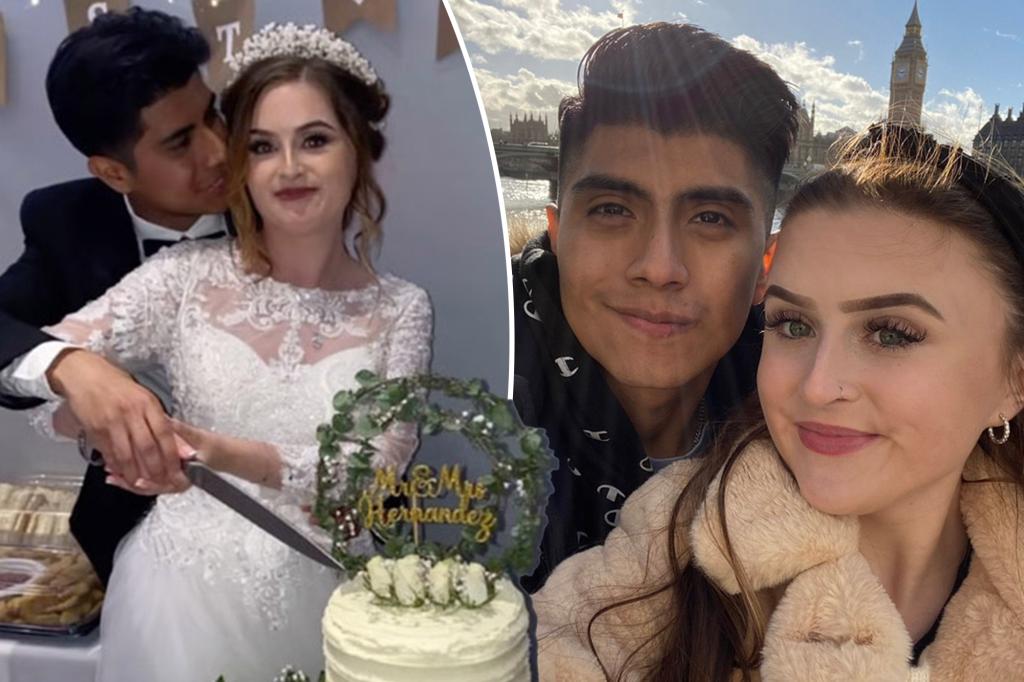 A 19-year-old British woman met her husband online and claims her friends and internet trolls insist he’s “using” her for a visa.

Earlier this year, Holly Hernandez married her husband Diego, 20, who is originally from Mexico and is currently living in the United Kingdom on a fiancé visa.

Diego and Holly met in 2018 when he liked one of her videos online.

He sparked her interest and the two found themselves inseparable, becoming “exclusive” in February 2019. At the time, they had only communicated virtually.

Holly was just 16 at the time, and had to convince her parents — Jason Dutton, 51, and Marie Tompson, 43 — that her love for Diego was true.

Holly took her dad with her to Mexico to meet her now-partner and his parents for the first time.

“I was so nervous when I went to meet Diego for the first time,” Holly told NeedToKnow.online. “I actually ended up catching a stomach bug and getting hospital treatment in Mexico on the first day.”

Diego met Holly at her Airbnb with his dad, Jose Hernandez, “to make sure I wasn’t a 69-year-old man,” Holly joked.

“He picked me up, gave me a huge hug and then handed me a little gift bag with some chocolates,” she said.

After meeting at the Airbnb, Diego took Holly on their first date to the fair.

Holly’s mother originally had concerns that her teenage daughter was talking to and dating a stranger online, but she trusted her daughter.

“I 100% trusted Holly’s judgment and after FaceTiming Diego and his family for the first time, all of my worries and concern flew out of the window,” Thompson told NeedToKnow.online.

“If my mum had said no to me and Diego, to something that has turned into my absolute future and my whole entire life, she would have potentially lost me as a daughter,” Holly admitted.

“So she would rather support me in whatever I choose to do and be there by my side in case it goes wrong, than say no and lose me,” she added.

While the 19-year-old’s parents were supportive of her relationship, her friends at school were not on her side.

But Holly and Diego’s love did last.

Diego asked Holly’s mom for permission on Christmas Day, and although she was “a little surprised,” she was excited for the couple.

“A lot of people expected my parents be mad about the engagement but they were actually really on board with it,” Holly said.

When the pair got engaged, people Holly used to be friends with at school started messaging her, congratulating her and wanting to rekindle their friendships.

“In my eyes you forgive but you don’t forget, and you keep people at arm’s length who have been like that,” she said.

Trolls online have given Holly hate, saying Diego is only with her for a visa.

“People are very racist online, especially about Diego, they say that he is illegal and they make comments about him just being with me for the visa,” Holly said.

Even with some hate, Holly and Diego have gone viral online. The pair has over 134,000 followers in total across their individual Instagrams and shared TikTok account.

After Holly and Diego got engaged, they looked into moving in with each other, but the COVID-19 pandemic halted their plans.

Diego was supposed to visit Holly for six months in April 2020, but couldn’t make it to the UK until July 2020. When he arrived, he stayed with Holly and her mom at their home in Leicester.

After realizing they liked living together, the couple decided to apply for a fiancé visa so Diego could stay in the UK with Holly.

They applied for the visa in September 2021 and finally got it accepted in January 2022.

If someone with a fiancé visa gets married within the first six months of being in the UK, the person is eligible to extend their residency by two and a half years, according to Gov.UK.

In June 2022, the teenage couple decided to get married in a “magical” ceremony.

“It wasn’t a big wedding, it wasn’t expensive, it was literally just a half-hour ceremony in the registry office and then a party in our local estate club,” Holly shared.

“It was the most perfect day, everyone was happy and Diego was even crying when I walked down the aisle.”

Diego has since applied for a spouse visa, which will allow him to be able to work in the UK for the foreseeable future.