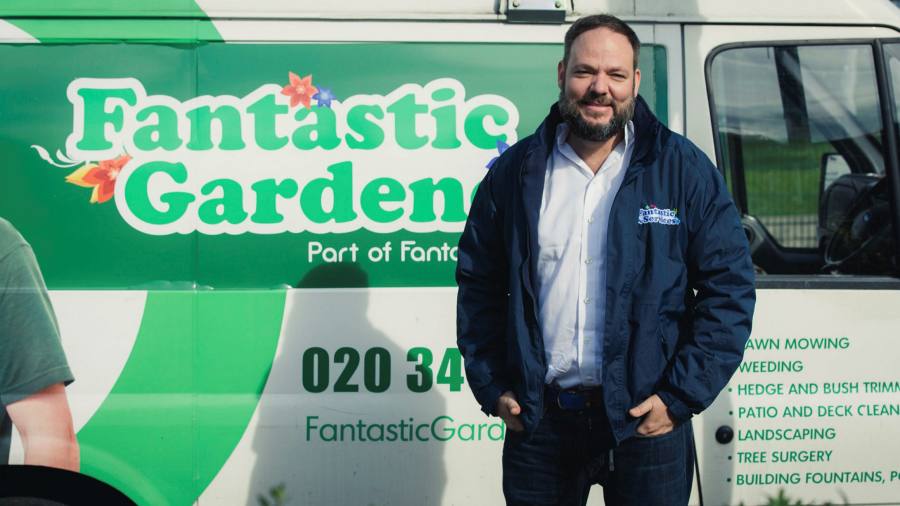 Demand for gardeners, removals and cleaners has surged since Covid-19 restrictions began to ease — a boon to the services business co-founded by Rune Sovndahl, 46, in 2009.

Danish-born Sovndahl, who settled in London in 1999, launched Fantastic Services, a domestic services provider, with entrepreneur Anton Skarlatov after being unable to find a carpet cleaner online. They each put in £3,000 in savings.

Turnover went from £800,000 in 2010 to £9.5m in 2020. Today the company, based near London Bridge, offers over 70 services nationwide, from pest control and waste removal to appliance repairs, locksmiths and property management.

It has 370 employees involved in operations, and 400 franchisees or domestic workers including cleaners and handymen who are directly delivering services. Ownership of the company remains split equally between Sovndahl and Skarlatov.

Did you think you would get to where you are today?From childhood I always had this inner desire to create things, and I was keen to know how businesses work. My father and mother were programmers. I was an only child. When I was six, I learned to write little pieces of code, and small programs by the early 1980s. I did not find it particularly interesting but I understood it, and even knew how an ATM machine worked.

I’m very surprised at the success of the business. It is my sixth adventure, but the others never came close to this. One was a mobile phone comparison site, another an online music school. I wanted to learn to play the guitar and I could not find a teacher.

It was very much the thread of how Fantastic Services came about. I tried to build websites allowing people to find specific criteria in their search for local services.

How has the coronavirus pandemic affected your business?
When the realisation hit people, many started to move out of central London, seeking homes with a garden or more space. Then they spent money on making their extra space more useful. We redecorated hundreds of garden sheds and [helped with] their conversion to offices. Spare bedrooms and attics also became home offices. We provided the decorators and moved things from attics into storage. We installed hundreds of home gyms.

While the demand for domestic cleaners halved in one day, removals and handyman services more than made up for what we lost. By April 2021 we were 10 per cent up on our 2020 profits. Retraining and teaching people new skills are a big part of our business. We had to change our approach, using video calls and seminars, but we could actually do more group training than before.

Have you encountered problems with staffing at a time of labour shortages in the UK?
We are proactively hiring across all areas of the business. It has been difficult to find the volume of workers we need to service demand. That’s why we have launched a £1m grant scheme to offer 200 grants of up to £5,000 each to help people start their franchise and incentivise new recruits to become part of the Fantastic Services family.

Brexit has definitely played a role, with many skilled workers returning to mainland Europe. It’s a challenge for many industries but thankfully our business model and technology systems enable us to schedule and plan in a way that we can effectively manage the demand. We have grown our franchise network by 10 per cent in 2021.

Was your first £1m a big milestone?
The first time I saw the digits, around August 2019, I was overwhelmed. It was literally just a few pounds over £1m profit. For 10 years before that we had come close to £1m but we always reinvested into the company.

I called Anton and said we had done it. However, we both thought of the company as very young and that there was still a long way to go. We had never taken any money out until then.

Anton and I each bought a property. For the first four years of Fantastic Services, I rented a place with Anton to save money. He bought a flat in Chiswick, and Olga and I found a place more centrally, in Holborn. It was the first time we felt secure.

What was the most challenging period of your career?The first lockdown in March 2020 was the most challenging experience of my life. I had a two-year-old son. We had invested heavily in more staff in 2019. In December 2019 we heard rumours about lockdowns and a possible pandemic. When we came home early from our Christmas holiday in Thailand, we could see from international competitors that something beyond our control was about to happen.

In Europe, some governments were sporadically locking down, but nobody really knew what was allowed or the new set of guidelines. We were unsure whether people could employ cleaners, gardeners and handymen, and just exactly what kind of work was essential.

We knew we had to act quickly and assess what was likely to happen. We invested over £150,000 in retraining over 200 franchisees, who suddenly had no work. Instead of delivering services inside people’s homes, they learned how to carry out antiviral sanitation and disinfection procedures in commercial premises.

We did everything to keep people busy. I made phone calls to supermarket chains offering our vans to help with grocery deliveries to ensure our franchisees had enough work. It was a cliff edge. We had to step in where the government didn’t. It was stressful because we felt a duty to do this. From March to December last year, I worked 20 hours a day, seven days a week. I did not have a single break. Our operations staff continued full time, but they worked from home.

What did you have to sacrifice to start the business?
I gave up a secure career working for someone else, at lastminute.com. Over the past 12 years I’ve been approached quite a few times to work as marketing director or chief marketing officer. I have had other chief executive offers, all with stability and very nice salaries.

What is the secret of your success?
Consistency. You have to keep going and focus on where you are going. We had to believe that if we reinvested our profits and hired wisely, things would go well.

There is another factor — frugality. We were up against companies that had a £20m UK marketing and development budget, and we beat them. We did not have the money to make mistakes.

In our business we take feedback seriously. When you are a chef, you get instant feedback like a reprimand or a compliment. You learn to accept and respond to criticism. We encourage feedback from our customers. It is hard, but the best way to grow.

What was your best preparation for business?
For me, being a chef and having to liaise with everyone under pressure in the kitchen was one of the best lessons I have had in teamwork. When we were growing the company very quickly, I drew on the fast pace of working as a chef just before the diners would arrive.

From just the two of us we went up to 300 staff over two years. Every process was new to us. We had to invent ways of running the business. Sometimes we were hiring 20 or 30 people a month. You don’t have manuals on this.

What is your basic business philosophy?
I believe in structured growth and creating solid assets. I am trying to create assets through our technology platform and brand value. We also train, assess staff and have a feedback system that shows whether a person is doing well or underperforming. One of the reasons we did not grow even faster is because our competitors hired everyone, whereas we vet, train and recruit people extremely carefully.

Our company ethos is to become as efficient as possible. We use technology to try to reduce our impact on the planet. Good cleaning, maintenance and repairs are inherently sustainable. Repairing and cleaning a carpet is better than putting it in landfill. I have learned that almost everything can be cleaned or repaired and can look as good as new, especially kitchen appliances.

Do you want to carry on till you drop?
We are putting together a plan to raise capital in the tens of millions for expansion across Europe and the US. We are opening one office a month in Europe. This is the first time we have sought outside funding. At 60 I reckon I’ll still be running a company. It might be in a slightly different industry, but I’ll be using the same software model as we have created for Fantastic Services.

Have you made any pension provision?
I was 26 when I started a company pension with BT, but the fund is tiny. My real pension is our company. When you invest in a pension, your fund might grow, but rarely double. When you run a company that is growing at 100 per cent, you can double your money in one year.

Besides domestic and commercial property, I like to invest in shares. I focus primarily on the technical sector, and track the Dow Jones Index, where I can make roughly 7 per cent a year return.

Do you believe in giving something back to the community?
We endorse children’s safety and local community projects. Last year, Fantastic Services delivered 4,500 free high visibility vests to nurseries and primary schools in London and Manchester. In 2017, a girl of nine from a Wandsworth primary school wrote a letter to us, asking to make their “garden happy again”. We sent a team of gardeners to work on her school garden makeover.

What do you consider as an indulgence?
As I work so much online one of my pleasures is cave scuba-diving. I was 35 when I did the training on holiday in Mexico. I even bought the dive shop in Tulum, Yucatán. It is not such an expensive hobby if you own the shop.