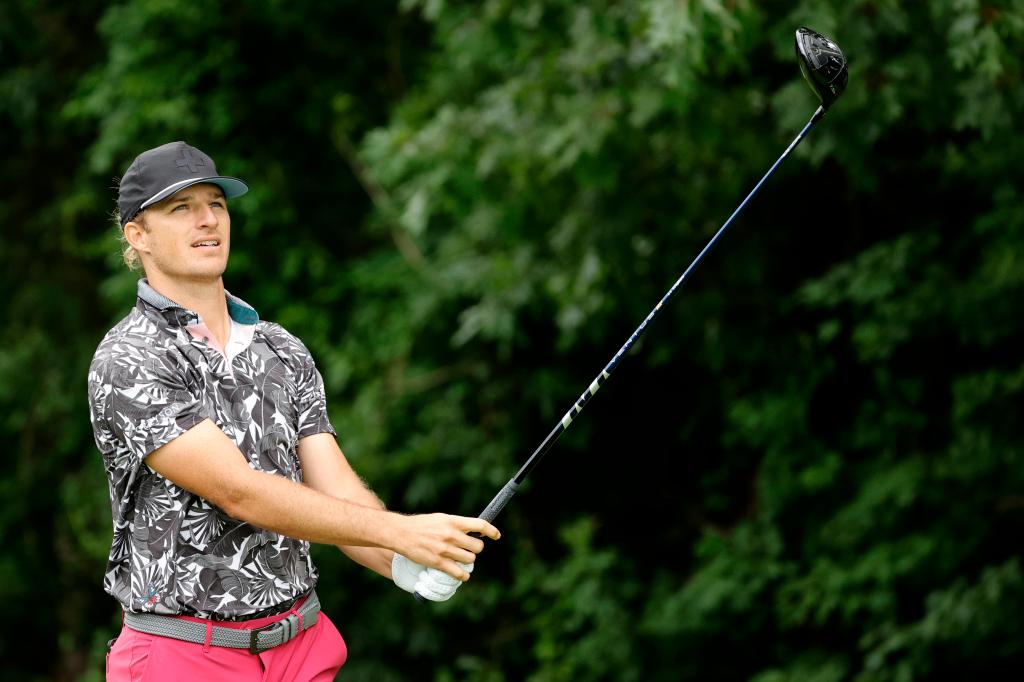 But how do you define a big week?

In the case of the 32-year-old native of North Jersey, the answer to that question isn’t so simple.

Hoffmann, who’s playing this week in the final tournament of his medical extensions the PGA Tour granted him as he has battled facioscapulohumeral muscular dystrophy (which has atrophied his pectoral muscles), needed a fourth-place finish or better to earn conditional playing status on the tour for the rest of the season. A two-way tie for second would earn him full status for the rest of the season.

Barring a miracle finish on Sunday at TPC River Highlands (think 58 or 59), neither of those is going to happen. Not with Hoffman in 70th place entering the final round at 3-over, 19 shots off the lead held by Xander Schauffele.

With no more medical extensions, Hoffmann will be in a no-man’s land of uncertainty. He will need to play his way into PGA Tour events through Monday qualifiers or he will have to rely on the mercy of sponsor exemptions.

Hoffmann has grown accustomed to unknowns, so he’s hardly daunted by the uncertainty of the next chapter of his life.

This is a man who, frustrated by doctors telling him there was nothing more they could do to stop the withering away of his chest muscles, stepped away from golf and uprooted his life to move to Costa Rica in an effort to heal in some of the most unorthodox ways you can imagine.

(Think drinking your own urine and rubbing it on the parts of the body that need replenishment.)

Hoffmann, who never has won on the PGA Tour in 164 starts since turning pro in 2013, stepped away from golf for two-and-a-half years and made a new life in Costa Rica, where he and his wife, Chelsea, bought a home and are planning to open a health and wellness center.

After leaving the PGA Tour after playing in the Shriners Hospital for Children Open in October 2019, he didn’t return until this past April for the RBC Heritage Classic, the first of the three events he has played this season.

The last cut he made in a tournament was in September 2019, which brings us back to how we’re defining success at the Travelers, in which Hoffmann made the cut this week.

“It’s definitely a sense of accomplishment — not for golf specifically, but for health reasons and all the hard work I’ve put into it,’’ Hoffmann told The Post after his round Saturday.

Better yet: His healing journey produced more tangible and important results than a fourth-place finish or even a T2 this week would have brought him — because his pectoral muscles are growing again.

“I’m like tasting it a little bit,’’ Hoffman said of his golf. “But I haven’t gotten in stride with it yet. Golf is a funny game — you just need confidence to keep building.’’

While studying Dr. Joe Dispenza, a former triathlete who was paralyzed after being run over by a car and healed himself by meditating, Hoffmann gained confidence that he could heal himself with the power of his own mind.

“He teaches how not just visualizing yourself in the future as healed, but acting like you’re already healed,’’ Hoffmann said. “That is so powerful it’s giving me goose bumps right now. I do it every day.’’

There was no shortage of skeptics when Hoffmann and Chelsea went on their journey to Costa Rica.

“My close friends were very supportive, but some of my acquaintances I heard through the grapevine were thinking I’m stupid or crazy,’’ he said. “They were asking, ‘Why don’t you go to the best specialist?’ Well, I did that and didn’t have any luck, so …

“I left my house when I was 15 [to play golf] and kind of taught myself how to grow up. This was just another stage of that, figuring things out on my own.’’

Hoffmann has taken more leaps of faith than he can count on his journey to wellness. He said he did three years of research into the drinking of his own urine and rubbing it into his body before he embarked on that.

“There are so many ways to use it because it has so many vitamins and minerals and stem cells,’’ he said.

Hoffmann said he “dry brushes” his body with a rough horse brush because “it opens your pores and you get out in the sun so you start sweating and you rub the urine into your body where your muscles are atrophied and those stem calls re-grow areas. Your skin is your biggest organ and it’s very absorbent.’’

Asked of how often he does it, Hoffmann said: “Right now it’s once a week or so. It depends on if I am at a place where I can get naked outside. You have to be outside.’’

No matter the depths of the unorthodox, Chelsea has been with her husband every step of the way as they have faced life’s uncertainties.

“I realized that it was so important for Morgan to keep going with his intuition and figuring out, ‘What am I called to do?’ ’’ she said. “And if he was still continuing to be called to play golf, then that’s what was meant for him. Every tournament, we’re still waiting to see if it’s meant to be.’’

Competitive golf still burns inside of Hoffmann, with a lingering sense of unfinished business.

“I’m not ready to just be a weekend golfer,’’ Hoffmann said.

“He knows he hasn’t yet played a tournament to his full potential and I feel like that’s what’s eating at him,’’ Chelsea said. “He just wants to show what he knows he’s capable of doing at a PGA tournament. I think that’s going to burn inside of him until he feels that’s he’s done that.’’