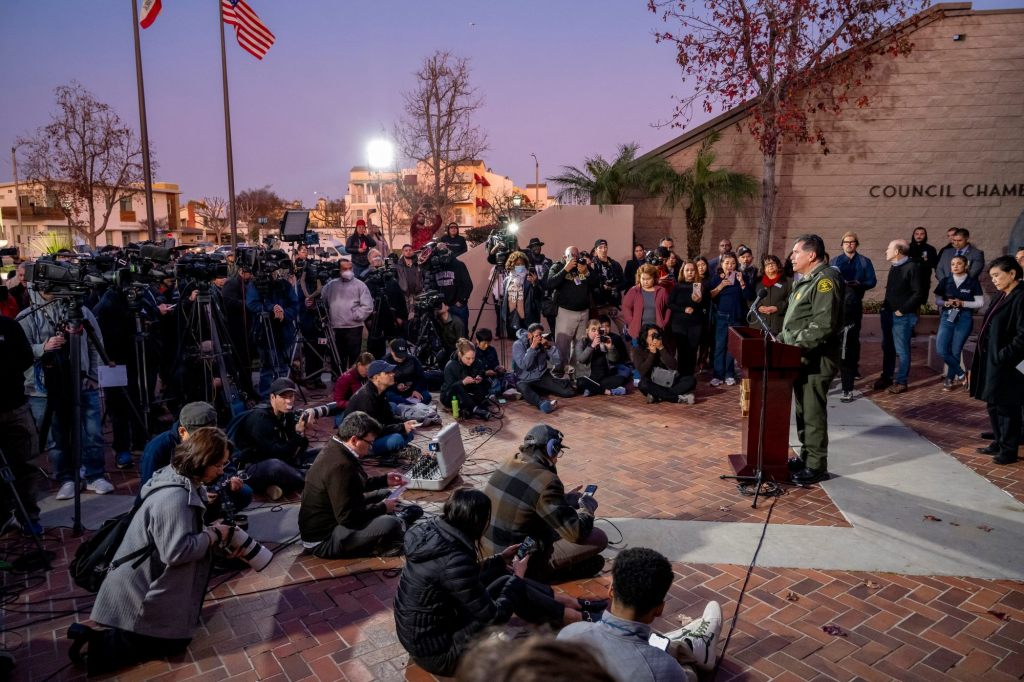 Less than two months after he was sworn into office, Los Angeles County Sheriff Robert Luna faced baptism by fire in the Monterey Park shooting that claimed 11 lives and catapulted him onto a worldwide stage.

Luna confronted his first test as head of the nation’s largest sheriff’s department in handling the county’s largest mass shooting during one of the region’s most celebrated holidays. He emerged with mixed reviews from experts praising him for his show of competence and compassion at the podium in media briefings, but concerned over the five-hour delay in alerting the public that a gunman was on the loose.

After serving as police chief in Long Beach for seven years, Luna promised a new era of accountability and collaboration when he easily unseated embattled ex-Sheriff Alex Villanueva in November.

Luna’s first crisis behind the five-star badge unfolded about 10:30 p.m. Saturday at a Monterey Park ballroom, where 11 were slain by a gunman who fatally shot himself Sunday at a Torrance strip mall. Through most of the ordeal, Luna was the face of law enforcement, the pull-together guy for federal, state and local authorities.

As far as Luna’s tactical performance, experts interviewed by the Southern California News Group said they didn’t know the inner workings of the investigation, only that the suspected culprit was quickly identified, cornered and no longer a threat. Some said Luna had not been at the Sheriff’s Department long enough to put his fingerprints on the operation.

At the podium, Luna verbally stumbled at times during news conferences and appeared less than polished, often reading from notes. But experts interviewed by SCNG said Luna appeared thoughtful and in command.

Pitney said the public would rather have someone who’s compassionate and low-key than an actor at the helm of the 18,000-employee department.

“Presentation style is not important, what matters is that you get (the investigation) right,” he said.

Pitney gave Luna an “A” for the news conferences, although the media often learned through law enforcement sources about what was happening before official pronouncements.

Pitney’s praise, however, was tempered by an Associated Press report that the Sheriff’s Department waited until about 3:30 a.m. Sunday to acknowledge that the gunman, later identified as 72-year-old Huu Can Tran of Hemet, was at large.

In an interview Tuesday with SCNG, Wiese added that law enforcement did not immediately put out a public alert because they did not have a detailed description of the gunman. “We knew it was a male Asian, but that’s about 70% of the community,” Wiese said.

At a news conference Monday, Luna said he would explore the reasons for the delay: “When we started putting out public information, the priority was to get this person into custody. Ultimately, it worked. We will go back and look at it as we always do. Nobody is as critical as ourselves as to what worked and, specifically, what didn’t work, and evaluate that, and see what the wait was in determining what the public risk was at that time.”

Experts on Tuesday said it was too early to judge Luna on the delay.

“An appraisal of the sheriff’s office needs to be tentative until we get the details of the response,” Pitney said. “As soon as you know an act of violence has occurred, you need to tell the public.”

“You may create more panic if you simply say someone is out there,” Fleischman said. “Part of the process is trying to gather enough information to put out something useful. … The time after (an incident) is critical and you’re trying to catch somebody quickly. …You’re not allowed to be inaccurate as the sheriff.”

Fleischman, who estimates that he has done 3,000 media interviews, gave Luna high marks for his work behind the bank of microphones.

“It’s not easy in the middle of a senseless tragedy with a lot of moving parts to step out on the podium and present reassurance,” he said. “When you know what you’re saying is being watched by millions on national television, no one is going to be perfect.”

“Give (Luna) a passing grade, give him a pat on the back, do an after-action report, we’ll do better next time,” Probolsky said.

“The truth is the sheriff doesn’t have hundreds of hours of TV time. He’s not an actor. The truth is a lot of people are better communicating in a room of six people and are not able to talk with a million people,” Probolsky said. “The sheriff is not a great orator. He’s fine.”