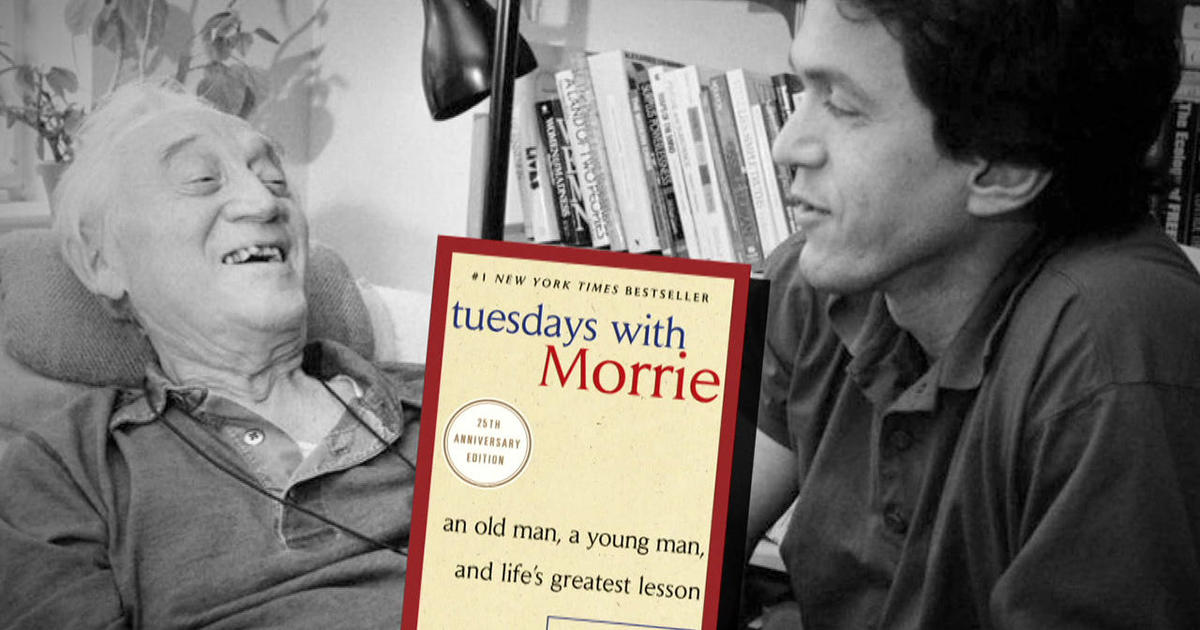 Mitch Albom on lessons learned from “Tuesdays with Morrie”

Back when “Sunday Morning” senior contributor Ted Koppel was at ABC News, they produced three “Nightline” programs with a retired university professor who was dying of ALS (often known as Lou Gehrig’s disease). “Some mornings I’m angry and bitter,” said Morrie Schwartz. “But it doesn’t last too long. Then, I get up and say, ‘I want to live.'”

What they could never have anticipated was that those conversations with Schwartz would become among the most popular programs they had ever done. And that, it turned out, was just the beginning. Because among those viewers was a young sportswriter, Mitch Albom.

“I had been so close to him in college,” he told Koppel. “I took every class he offered. I promised him the day I graduated that I would always stay in touch, and then I broke that promise. So for me it was a question of, ‘Oh, my God, he’s dying. What do I do now?  And how do I try to make up for what I haven’t done in the past?'”

Albom began visiting Schwartz weekly – every Tuesday as it turned out – until Morrie died. And then, Albom wrote a book: “Tuesdays with Morrie.” You may have heard of it.

Koppel said, “You’re a good writer, Mitch; but you’re not Mark Twain, for God’s sake. So, what is the chemistry? After all these years now, how many copies has the book sold?”

“Has there ever been a biographical work that’s sold more?”

“Tuesdays with Morrie” was first published 25 years ago. Its ongoing popularity was celebrated recently at the National Book Festival in Washington.

One fan showed Albom her copy, yellowed with age: “It’s probably my third copy,” she said.

Another woman said, “I read ‘Tuesdays with Morrie’ sophomore year of high school.”

“So, I was homework?” Albom asked.

Koppel asked, “It has crossed all kinds of cultural, ethnic, religious, racial boundaries. What are people getting out of it that they don’t get out of most books?”

“Well, I’ve learned that the appeal of ‘Tuesdays with Morrie’ isn’t my writing. I’m not Mark Twain! It’s the story of a younger person who’s a little lost and an older person who’s about to leave the world who says: ‘Let me tell you what I’ve learned.’ Almost everybody can find themselves in one of those two characters.

“Well, let me ask you: What do you think it was about your version, Ted and Morrie, that made it the most popular ‘Nightline’ ever?”

“Clearly there was a vulnerability that made Morrie accessible to everyone,” Koppel replied. “And when you see someone dying … they were watching him lose the ability to live, and he never lost his dignity.”

Schwartz: “Don’t let go too soon, but don’t hang on too long; find a balance. … The disease is not going to get my spirit. It will get my body. It will not get my spirit.”

And if you’re thinking that’s a theme that has dramatic potential, you’d be right. There is a play, and it has been produced in more languages than Albom can recall: “There’s been, like, 600 different productions of the play around the world.”

And then, there was the 1999 movie, starring Jack Lemmon as Morrie and Hank Azaria as Mitch.

“I do remember the first day I went to the set of the movie,” Albom recalled. “I heard Jack Lemmon say, ‘Mitch, when you learn how to die, you know how to live.’

The almost universal appeal of “Tuesdays with Morrie” has produced a precarious tension between legitimate education and the pressure to merchandise: “At the height of this I got a note saying, ‘We want to do a Morrie calendar with expressions from Morrie on every …’  I said, ‘No.’ Then, they sent a thing, ‘We want to do a bumper sticker.’  I said, ‘No.’ Then, they said someone wants to make a bracelet, WWMD? ‘What Would Morrie Do?’ You know, instead of ‘What Would Jesus Do?’ Thank God I turned down every one of those things.”

Perhaps no one’s life has been more profoundly changed by “Tuesdays with Morrie” than Albom’s own.

“It turned your life inside out,” said Koppel.

“Totally. Before ‘Tuesdays with Morrie’ people would spot me in an airport: ‘Hey, sports guy! Who’s gonna win the Super Bowl?’ And I would say, ‘Patriots,’ and just keep going up the escalator. After ‘Tuesdays with Morrie’: ‘Hey, uh, my mother died of cancer and the last thing we did was read your book together. Can I talk to you about it?’ And you can’t go ‘Patriots.’ You have to stop, and you have to listen. Most people in life, no matter how happy they look on the outside, are walking around with a piece of a broken heart.”

Albom’s initial motivation in writing the book was to raise enough money to pay Morrie’s medical bills. Half of the royalties went to the family, Albom confirmed, and they continue to.

And Albom has become deeply engaged in charitable work: “And that’s totally due to Morrie, 100%.  Morrie told me an aphorism about ‘Giving is living,’ ’cause I watched him always helping other people while he was dying. And I said, ‘I don’t get it. You’re the one who they should be feeling sorry for.’ And he said, ‘Because that’s taking. And taking makes me feel like I’m dying, and giving makes me feel like I’m living.'”

Albom now operates nine separate charitable operations in Detroit, and an orphanage in Port-au-Prince, Haiti. He said, “I go every month since 2010, and Morrie’s right. I’m more alive during those moments than I am in anything – when I’m writing a book. Power goes out all the time, it’s hot, it’s sweaty, it’s uncomfortable, but I always sleep so much better there.”

Albom has about 20 hours of audio conversations with Morrie, permitting listeners to his podcast today to eavesdrop on moments more than 27 years ago:

Koppel said, “I’m assuming that didn’t shock you, when Morrie said that?”

“No, he used to do that a lot. ‘Mitch?’ And he would make sure that I was looking ’cause I was usually fiddling with something. I’d look over and he’d say, ‘I love you.’ By the end I said, ‘I love you, too.'”

“You and Morrie had a conversation: come to the gravesite on Tuesdays and we’ll continue the conversation. Have you ever done it?”

“Oh, many times,” Albom replied. “Almost every time in Boston. He said, ‘I’ll make you a deal, Mitch.  After I’m dead, you talk, I’ll listen. I think it’s the whole philosophy of ‘Tuesdays with Morrie,’ which is, if you spend your time as Morrie did, then when you die, you’re actually not 100% gone. You live on in the heads and the hearts of everybody you touched. There’s probably not a day goes by in my life that I don’t hear Morrie’s voice. I hear him ringing around like a penny inside a piggy bank. When you pick it up and shake it – there it is!”