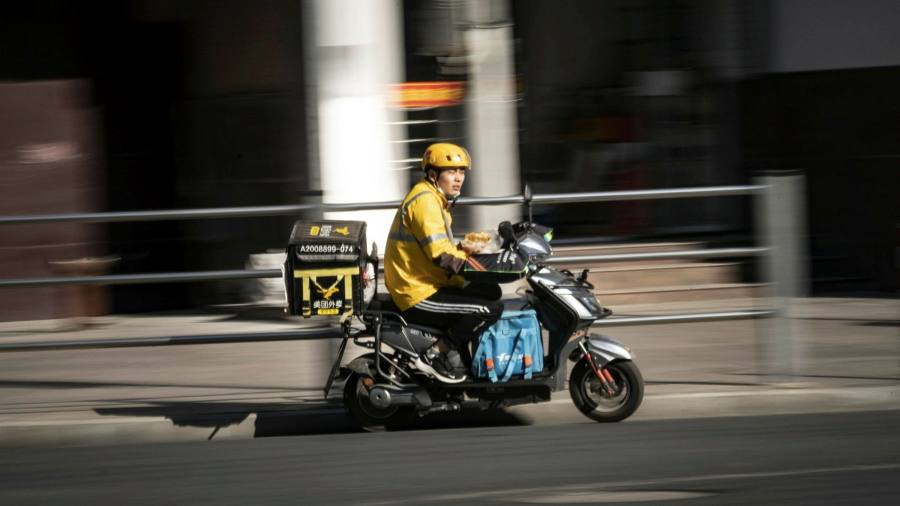 China’s antitrust regulator has fined the food delivery group Meituan Rmb3.4bn ($530m) for abusing its market position and has ordered the company to “comprehensively rectify” its operations.

The announcement on Friday by China’s market regulator caps a months-long investigation into the Beijing-based company. It was found guilty of monopolistic practices, such as forcing restaurants to exclusively sell food on its app, in violation of the country’s antitrust rules.

But the fine was lower than expected, and far lower than the Rmb18bn fine handed to Alibaba in April for similar antitrust abuses. Meituan’s fine represented around 3 per cent of its 2020 revenues, while Alibaba paid out the equivalent of 4 per cent of its 2019 revenues.

“This is good for Meituan. The fine is lower than expected and with no other punitive measures. It won’t have a substantive impact on the business,” said Li Chengdong, chief executive of Dolphin Think Tank.

Meituan’s legions of yellow clad delivery riders zip food around Chinese cities and are the key draw for its 628m annual users. It has leveraged this huge base to expand into offering everything from bike shares to hotel room booking on its superapp.

The State Administration for Market Regulation (SAMR) said that since 2018 Meituan had forced merchants into exclusivity agreements by charging higher commissions to those who resisted, and slowing down their approvals to list on its app.

Meituan used deposits, algorithms and data to ensure restaurants remained loyal. From 2018 to 2020 the company took in Rmb1.3bn in deposits from 1.6m merchants to guarantee their compliance with the exclusivity agreements.

During that period Meituan grew its share of China’s total food delivery orders from 62.4 per cent to 68.5 per cent, regulators said. It was ordered to return the deposit money to merchants.

Meituan was also ordered to treat its delivery riders more fairly, after accusations of not paying them enough and denying them benefits. It has to report back on all the rectification actions it had taken within 15 days and will continue to have to file reports on its compliance for the next three years.

Regulators said the company had quickly admitted its faults, cooperated with the probe and provided evidence to investigators. This was taken into account when deciding the size of the fine.

Meituan on Friday said it “sincerely accepted” the penalties and would conduct a “comprehensive self-examination and rectification”.

“Meituan will take this as a warning, operate in compliance with laws and regulations . . . and work hard to contribute more to the high-quality development of the national economy,” it said.

China this year has launched a campaign to reshape the tech sector, forcing the largest operators, including Alibaba and Tencent, to open up their platforms to services from rivals, after years of the companies building empires ringfenced from each other.

“Laissez faire regulation is history, tightened oversight is the new norm,” said Ming Liao of Prospect Avenue Capital. “Unlike before, investors need to pay attention to ESG and compliance now and it should be a deal breaker.”

China’s central bank governor signalled in a speech on Thursday that regulators would continue to tighten oversight and demand changes of fintech groups in the country such as Jack Ma’s Ant Group and Tencent’s Wechat Pay in order to weaken their hold on the market.

Beijing has also pushed its corporate titans to be better corporate citizens in a “common prosperity” drive that has tech chiefs jumping to pledge ever larger sums to charity.

Your crucial guide to the billions being made and lost in the world of Asia Tech. A curated menu of exclusive news, crisp analysis, smart data and the latest tech buzz from the FT and Nikkei

2 Win Nobel Prize In Medicine For Showing How We React To Heat, Touch