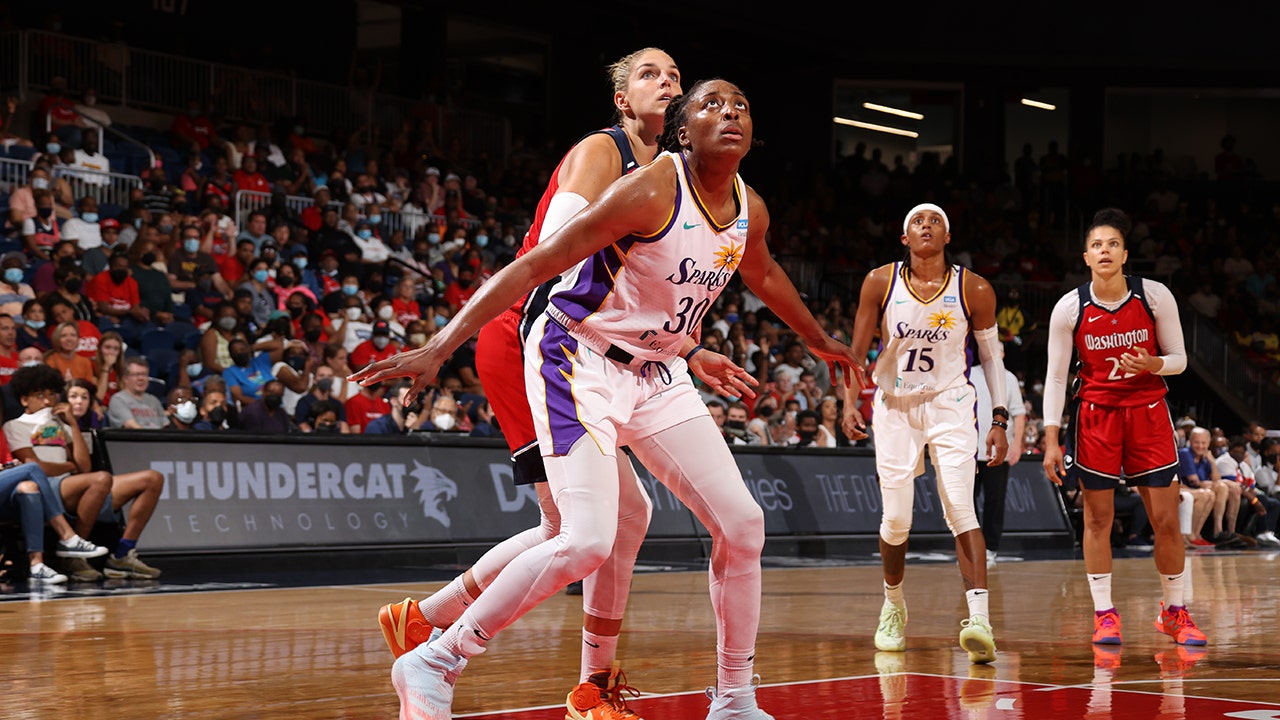 Several Los Angeles Sparks players and coaches took to social media on Monday to share their frustrations after having to spend the night at an airport when their commercial flight got canceled.

Another stark reminder of the challenges facing the WNBA was brought to light this weekend when several Sparks players, after keeping their playoff hopes alive with a necessary win over the Washingon Mystics on Sunday, had to sleep at the Dulles International Airport after having their flight repeatedly delayed before eventually being canceled hours later.

Elena Delle Donne #11 of the Washington Mystics and Nneka Ogwumike #30 of the Los Angeles Sparks hug before the game on Aug. 7, 2022 at Entertainment &amp; Sports Arena in Washington, DC.
(Stephen Gosling/NBAE via Getty Images)

“We are roaming the airport. First time in my 11 seasons that I’ve ever had to sleep in the airport,” former league MVP Nneka Ogwumike said in a video posted to Twitter.

In a statement to the Washington Post, a spokesperson for the Sparks said all the players were offered a hotel room but not all of them took advantage of the accommodations.

Nneka Ogwumike #30 of the Los Angeles Sparks boxes out against the Washington Mystics on Aug. 7, 2022 at Entertainment &amp; Sports Arena in Washington, DC.
(Stephen Gosling/NBAE via Getty Images)

Brittney Sykes, who scored 21 points to snap the Sparks’ six-game losing streak on Sunday, and assistant coach Latricia Trammel also took to Twitter to share their thoughts on the situation.

Brittney Sykes #15 of the Los Angeles Sparks dribbles the ball during the game against the Washington Mystics on Aug. 7, 2022 at Entertainment &amp; Sports Arena in Washington, DC.
(Stephen Gosling/NBAE via Getty Images)

The New York Liberty was fined $500,000 in March after owner Joe Tsai charted flights for the team in 2021. Chartered flights are against the league’s collective bargaining agreement to maintain a competitive balance between the franchises.