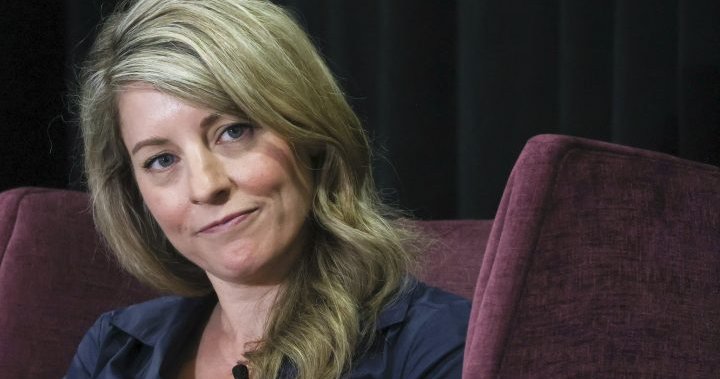 The Liberal government faced accusations on Thursday of fuelling Vladimir Putin‘s war machine by returning pipeline equipment in Montreal for repairs to a Russian energy giant.

Ukraine‘s ambassador and Conservative critics argued Canada‘s decision to return the turbine means more funds will be pumped into Gazprom, which is controlled by the Russian state, and in turn will allow the country’s president to buy more arms to attack Ukraine.

The accusations were made during heated exchanges at a parliamentary committee meeting where Foreign Affairs Minister Melanie Joly and Natural Resources Minister Jonathan Wilkinson gave evidence on the decision to return the equipment.

Last month, the Liberal government drew criticism for granting Siemens Energy an exemption from sanctions against Russia and allowing the turbine to be returned for installation in the Nord Stream 1 pipeline, which carries natural gas to Germany.

The permit allows Siemens to import, repair and return up to six turbines for Gazprom.

Ukrainian Ambassador Yulia Kovaliv called on Canada to rethink its decision for the other five turbines, which she said could lead to more financial support for the Russian military.

Kovaliv said Ukraine was grateful to Canada for its steadfast support since Russia’s invasion, but she said its decision to waive its sanctions regime to allow the return of the turbine has set a dangerous precedent and had already strengthened Moscow’s sense of impunity.

The ambassador said the decision marked a slippery slope and allows Russia to weaponize energy while giving Putin “grounds for further blackmail.”

She said Canada repairing and returning additional turbines will be “turned by Russia into tools of humiliation and there is no need to take the bait.”

She cautioned against appeasement of Putin’s “energy blackmail” and called on Canada to revoke the permit, adding that gas could be pumped to the EU through a pipeline in Ukraine.

Speaking after the meeting, Kovaliv denied Putin had managed to divide allies supporting Ukraine through the turbine issue and said they remained “united.”

German Ambassador Sabine Sparwasser said it was only after a lot of soul-searching that Germany asked Canada for a waiver of its sanctions to return the turbine being repaired in Montreal. She said her country was very grateful to Canada for doing so.

The turbine was first sent to Germany and is supposed to eventually go to Russia, but it remains in Sparwasser’s country. She said Putin is using it as an excuse to limit gas supplies and Russia doesn’t want to pick it up despite it being in perfect condition.

Russia has since reduced the pipeline’s flow to 20 per cent of capacity. Kremlin spokesman Dmitry Peskov has claimed that Gazprom needs documents from Siemens Energy proving that the equipment isn’t subject to western sanctions before it can be returned to Russia.

Asked during the hearing if Canada should cancel the permit for the other five turbines if Russia does not pick up the repaired one, the ambassador said, “We will see what happens.”

She said Germany did not want to fall into Putin’s “trap” and was working hard to reduce its reliance on Russian gas to heat homes, including looking to Canada for liquefied natural gas and green hydrogen as energy sources in the future.

The EU’s ambassador to Canada, Melita Gabric, accused Russia of using energy supplies as a “weapon” against EU states.

Germany has reduced its reliance on Russian natural gas from 55 per cent to 26 per cent, and was stockpiling fuel for the winter ahead, she said.

Conservative MP James Bezan told the committee that Canada had been “outmanoeuvred by the Russian Federation.”

He said it seemed that Putin was playing chess while Canada was playing checkers, and accused the Liberal government of “enabling” Gazprom, which would give Russia more funds to buy weapons to kill Ukrainians.

“It’s embarrassing that the government of Canada capitulated,” he said.

Alexandra Chyczij, of the Ukrainian Canadian Congress, told MPs that the decision to return the turbines was “the thin edge of the wedge” and the first waiver of sanctions since Russia’s invasion of Ukraine in February.

She warned that “appeasement of dictators” never works and just “emboldens them.”

But Foreign Affairs Minister Melanie Joly denied that Canada was capitulating and insisted it was rather calling Putin’s bluff. She said returning the turbine denied Putin a pretext for reducing the flow of natural gas through the pipeline.

Natural Resources Minister Jonathan Wilkinson echoed this sentiment and said revealing Putin’s dishonesty had always been a reason for the decision.

Germany’s ambassador also said calling Putin’s bluff had been one of the rationales for making the decision as well as wanting “ to test” if returning the turbine would increase flows of gas from Russia.

But Tory MP Marty Morantz noted that the Liberal government didn’t use this language when the decision was first made. He questioned when it decided the rationale was about calling Putin’s bluff, rather than about securing gas supplies to Europe.

The Conservatives also questioned whether the alternative of funnelling gas through pipelines through Ukraine had been actively explored by the government.

Wilkinson said the option had been looked at in detail but was not seen as viable, not least because Ukraine pipelines were through a war zone. He added that Canada was working closely with European nations to help wean them off their reliance on Russian energy to heat their homes, including by planning to supply natural gas from Canada.

Both Wilkinson and Joly said the decision was taken after wide consultations, including with Ukraine, and was a difficult one.

Wilkinson said the intention of sanctions imposed after Russia’s invasion of Ukraine is to punish Putin and not to punish Canada’s allies in Europe.

Joly said the government was firmly committed to continuing sanctions to squeeze Putin and was planning new rounds every two weeks.

DeSantis to hit campaign trail to rally support for…