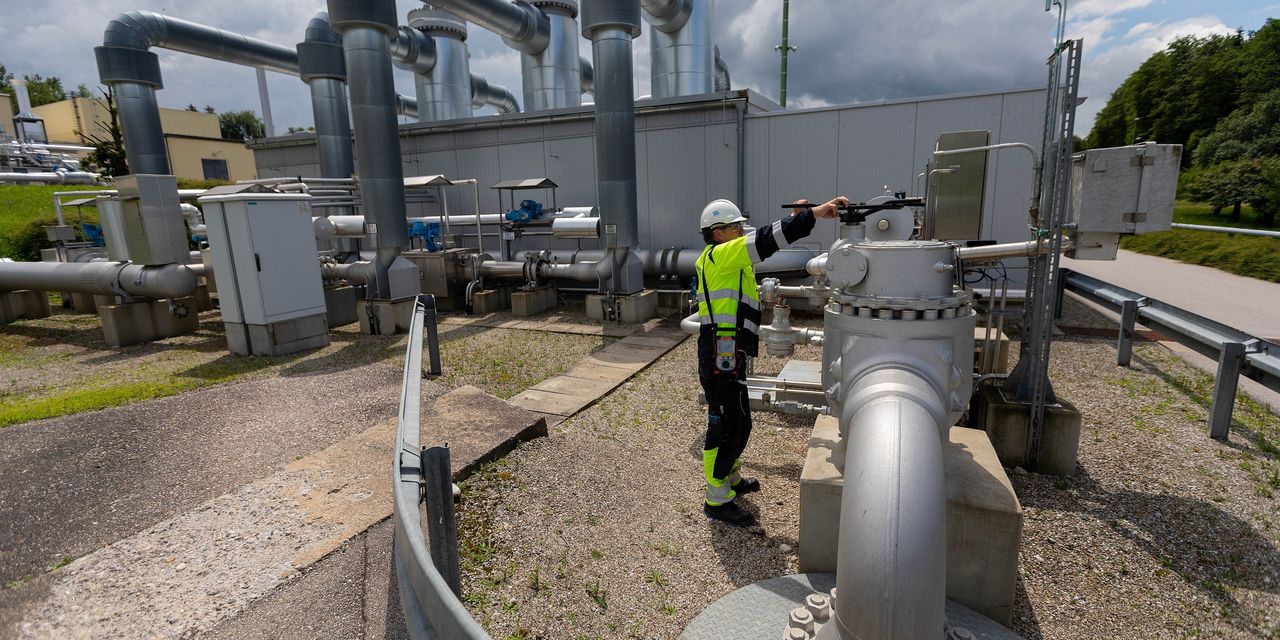 Russia’s throttling of natural gas to Europe is endangering the continent’s race to sock away enough fuel to ride out next winter.

In energy circles, Europe’s summer months are known as the “filling season.” Lower demand for natural gas allows the bloc to replenish its vast underground storage network for colder months, when consumption soars. Storage includes salt and porous-rock caverns, aquifers and depleted gas fields. This year’s effort to top up these reservoirs has become a closely watched gauge of Europe’s energy security.

The job has become a lot harder after Russia last week cut its supplies through its main pipeline to Europe by almost half. In response, Germany this weekend rolled out a series of emergency measures, saying it would restart coal-fired power plants and offer incentives for companies to curb natural-gas consumption.

Gas flows through the Nord Stream pipeline, the major thoroughfare for Russian gas to Europe, have fallen sharply from normal levels for this time of year, according to analysts. If they stay at current levels, Europe will struggle to reach 70% of storage capacity by November, said Kateryna Filippenko, principal analyst for global gas research at consulting firm Wood Mackenzie.

That would fall short of a European Union goal of hitting 80% storage by Nov. 1. EU member states have drawn up plans to ration gas to heat homes or curtail flows to factories that make fertilizer and other energy-intensive products if they don’t make this goal. A cold winter next year could drain supplies more quickly than normal, threatening outright shortages.

Weighing further on supplies, a major U.S. supplier of liquefied natural gas in Texas said a recent fire would knock out an export facility there until later this year, cutting planned shipments to Europe.

Historically, Europe has used its gas-storage network to guard against wintertime shortages while also smoothing out periods of fluctuating demand by stowing away gas for use when homes and offices crank up the heat. “It’s a good buffer, in a normal year. And in a normal year, it would be Russian gas,” said Ben McWilliams, a research analyst at Brussels-based think tank Bruegel.

European member states together have 1,100 terawatt hours—or around 100 billion cubic meters—of storage capacity spread across roughly 160 underground facilities in 18 countries, according to EU data. The fuel warehoused for colder months typically covers 25% to 30% of winter demand, EU data show. More than 70% of that underground capacity is concentrated in Germany, Italy, Austria, the Netherlands and France.

In May, seeking to ensure winter supplies, European officials agreed on rules requiring EU underground reservoirs to reach the 80% level by November.

EU-wide storage was about 54% full as of the weekend, according to industry group Gas Infrastructure Europe. While that is above last year’s 44% at this time, analysts say the new supply constraints are endangering the Nov. 1 target. Prices for natural gas in northwest Europe surged more than 50% last week and are more than four times as high as a year ago. The market is moving on fear of shortages more than immediate need, said Stuart Joyner, an energy analyst at brokerage Redburn. “What this is showing is that we really don’t have any margin of error in the European gas supply.”

During the 2020-21 cold season, from October to March, more gas than in any previously recorded year—720 terawatt hours—was removed from European underground storage, according to Gas Infrastructure Europe. That meant the bloc came out of winter with unusually low storage volumes and had to play catch-up, adding pressure to an already-tight global market.

blamed a delay on maintenance by a German company.

European officials, energy executives and analysts dismissed this explanation, and said the reduction was aimed at testing EU resolve in punishing Russia with sanctions for its invasion of Ukraine. They said that Moscow could turn off the pipeline completely at any moment.

Tight supplies in Europe will have global implications by sucking gas into the continent and driving up prices in Asia and elsewhere, said James Huckstepp, an analyst at S&P Global Commodity Insights.

The EU and U.K. have become the go-to destination for U.S. gas exports in liquefied form this year. When prices leapt in the fall, LNG tankers heading to Asia redirected to supply the starved the European market. Since then, there has been little letup. Europe accounted for 74% of U.S. LNG exports in the first four months of 2022, according to the U.S. Energy Information Administration.

Among European countries, Germany is particularly vulnerable to any shortfall in gas supplies. For much of Europe, wintertime daily gas demand tends to be about triple typical summertime demand, but Germany’s massive domestic market and heavy reliance on gas for heat can mean far more dramatic swings, with demand rising sixfold in the cold season, said Graham Freedman, a Wood Mackenzie European gas analyst.

Should rationing become necessary, governments will protect households first, analysts say. “You don’t want people freezing in their homes,” Mr. Freedman said. The economic risk is “you see large industrial consumers of gas either greatly reducing their consumption or being shut down altogether.”

Italy, which benefits from milder winters than its northern neighbors, is in a better position than Germany to attract alternative supplies via pipeline and by ship, according to JPMorgan analysts. Among the biggest importers of Russian gas until the war, Italy has sharply cut its dependence since the February invasion.

—Caitlin Ostroff contributed to this article.

Rip Currents Don’t Have to Be So Deadly