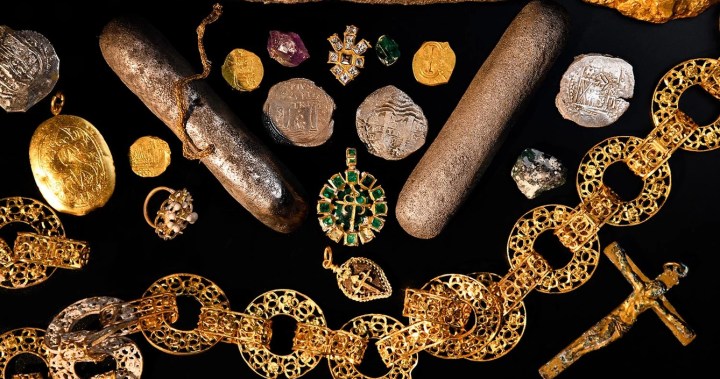 A centuries-old shipwreck with a bloody history, a secretive order of medieval knights and treasure beyond your wildest dreams — what sound like elements from a storybook are actually very real, and it’s all unfolding off the coast of the Bahamas.

After a two-year expedition to excavate the remains of a 350-year-old Spanish galleon that sank in 1656, a trove of sunken treasure will go on display at the Bahamas Maritime Museum this month; in fact, the museum was opened in part because of these discoveries.

The finds are thanks to shipwreck specialist Carl Allen, of Allen Explorations, and archaeologists and divers from the Bahamas and the U.S. who are attempting to solve the mystery of how this sumptuous ship met its end.

Gold chains, jewel-encrusted pendants, a silver sword and precious gems, coins and ingots were among the artifacts saved from a watery grave aboard the wreck of the Nuestra Señora de las Maravillas (Our Lady of Wonders).

Following a hidden 13-kilometre trail of debris, researchers believe they have located the ship’s lost sterncastle, where these most recent finds were recovered.

Among the artifacts of note was a 1.76 metre-long gold filigree chain with rosette motifs and a number of pendants that belonged to a religious order of knights founded in the 12th century, known as the Order of Santiago.

A scallop-shaped gold pendant bears the Cross of Santiago (or St. James) set on an Indian bezoar stone, which was thought to have healing properties in Europe at the time. Another knightly pendant features a large Colombian emerald with a dozen smaller emeralds set around it.

This necklace was also adorned with the Cross of Santiago and experts believe the 12 emeralds represent the 12 apostles of Christ.

“When we brought up the oval emerald and gold pendant, my breath caught in my throat,” Allen told CNN, adding: “How these tiny pendants survived in these harsh waters, and how we managed to find them, is the miracle of the Maravillas.”

Everyday items such as stone ballast, iron fasteners, pins for rigging, olive jars, and Chinese and Mexican plates were also found on the ocean floor, alongside a soldier’s silver sword hilt and a pearl ring thought to be a personal item of one of the sailors.

The presence of mined emeralds and amethysts from Colombia, which were found in the wreckage, suggest that the ship’s crew were involved in contraband trafficking, as no mentions of jewels were found on the ship’s manifest.

Maravillas means wonders and marvels in Spanish, but the Maravillas’ gruesome end was anything but.

The ship was the victim of a collision that occurred near midnight on January 4, 1656, according to the Bahamas Maritime Museum. A navigational error caused the flagship of its fleet to ram into the Maravillas, where it then violently crashed into a coral reef.

The ship sank like a stone about 70 km off the coast of Little Bahama Bank. It was weighed down by a double cargo of treasure: its own delivery of silver, as well as silver the crew had salvaged from the wreck of the Jesús María de la Limpia Concepción, a Spanish galleon that sank two years prior.

The 650 sailors on board clung to pieces of debris through the night in frigid waters. By morning, only 45 people survived, the others having been eaten by sharks or succumbed to exposure.

Much of the silver on board was meant to be paid as tax to Spain’s King Philip IV, so in the following two decades after the wreck, the Spanish monarchy contracted 10 salvage operations to pick over the wreck of the Maravillas. They recovered all 36 of the ship’s bronze cannons as well as 2.9 million silver pieces.

The wreck was rediscovered in the modern day in 1972 by Robert Marx, a treasure hunter who found thousands of coins and silver bars where they had lain on the sea floor for centuries. By the 1990s, 3.9 million artifacts had been recovered.

These were hardly scientific operations, with treasure hunters often using smash-and-grab tactics before selling their finds off to the highest bidder.

Allen Explorations though, used sonar, seabed geology, current patterns and 8,800 magnetometers (instruments that measure magnetic fields) to find what remains of the wreck. Though the company has joint ownership of the treasure with the Bahamas government, it’s committed to keeping the collection together and open to the public.

So committed, actually, that they sponsored the opening of the Bahamas Maritime Museum, which will open to visitors for the first time on August 8.

Its first exhibits will examine the history of Lucayan free-divers, the horrors of the Atlantic slave trade, and, of course, the wreck of the Nuestra Señora de las Maravillas.

A Bigger Penalty, but QB Isn’t Admitting to Wrongdoing