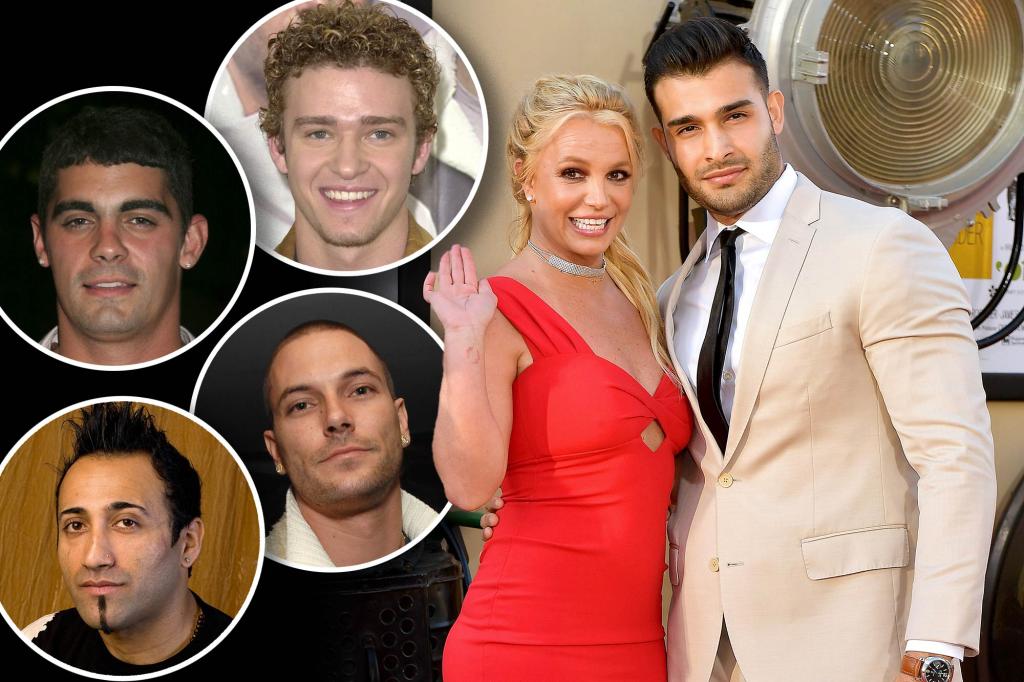 Inside Britney Spears’ toxic love life and all her exes

Britney Spears’ rocky road to love is paved with men who have used her for her fame and fortune.

Those who know the pop princess well hope that her marriage to long-time boyfriend, Sam Asghari, 28, will be her happily-ever-after following her 2021 release from conservatorship.

But one Hollywood source who worked closely with Spears, 40, told The Post: “I honestly just really hope that they’ve signed a prenup. This guy’s a wannabe actor, and I hope this is real.

“You just want her not to be taken advantage of.”

Although Spears’ brother Bryan was due to be at the wedding, her mom, Lynne, dad Jamie, younger sister Jamie Lynn were not invited. Her two boys, Sean, 16, and Jayden, 15, were not attending either, although a lawyer for their dad, Kevin Federline, said: “Although the boys will not be in attendance, Kevin and the boys are happy for Britney and wish her and Sam all the best going forward.”

“I think it’s a good thing, if everything goes well,” a former boyfriend of Spears told The Post Thursday of the marriage. “I do worry about the age difference, and I was around Hollywood enough to know that it’s hard to tell when someone loves you for you and when they’re after your money. But I don’t want to rain on Britney’s parade. I hope it’s a good thing.”

“We had a great time together, she’s a great girl, even if the people around her were a little sketchy. But I hope that’s behind her now.”

Here are the lovers Spears has left in her wake:

The former couple first met in the early ’90s while filming “The Mickey Mouse Club.”

“Like, we’ve gone through so much together and we’ve known each other since we were 12 years old,” Spears gushed to The Observer in 2001. We know each other inside and out.”

Timberlake, the former NSYNC heartthrob, told GQ magazine in 2006: “I was infatuated with her from the moment I saw her.”

The Hollywood source who worked with Spears told The Post: “The real love of her life was Justin, because it was true love in the beginning and they were on the same level. Britney was in fact a little bigger, because she was solo and Justin was in a boy band.

“Britney really loved Justin. They were best friends and they grew up in the same industry … until they grew out of each other.”

In 2002, the two broke up amid allegations that Spears had cheated on Timberlake with her choreographer Wade Robson.

Timberlake, now 41, released his hit heartbreak track “Cry Me a River” that same year, hiring a Britney lookalike as the cheating star of the video.

Now married to Jessica Biel, Timberlake has apologized to Spears for not speaking up for her in the past. When she spilled the agonizing details of her conservatorship in court in June 2021, Timberlake tweeted: “After what we saw today, we should all be supporting Britney at this time.”

Earlier this year, Spears blasted Timberlake for “using” her name to sell records of his debut album, “Justified,” back in 2002 — writing in a since-deleted Instagram post that Jesus had spoken to her about those who betrayed her: “Your ex did the same thing … with his first album using your name claiming you did him dirty!!!!”

Sources who know Spears confirmed to The Post that Robson and Spears hooked up behind Timberlake’s back, prompting the sweethearts’ split — and “Cry Me a River.”

Robson, 39 — who featured in HBO’s “Leaving Neverland” doc, in which he accused Michael Jackson of molesting him when he was 7 — was Spears’ choreographer and worked with NSYNC as well.

Legend has it that Timberlake uncovered the alleged affair when he found a note from Robson in Spears’ dressing room in February 2002, on the night that the couple were scheduled to appear on “Saturday Night Live.”

The Louisiana native, 40, is best known for his short-lived marriage to Spears. It lasted only 55 hours — but he continues to haunt her.

On Thursday, Alexander live-streamed himself on Instagram somehow getting inside Spears’ home — in an attempt to crash her wedding to Asghari — and being apprehended by police

They were childhood friends who decided to tie the knot in the early hours of Jan. 3, 2004, at The Little White Wedding Chapel in Las Vegas. The marriage was then annulled due to pressure from the pop star’s family.

Divorce attorney Mark Goldberg later said the pair had wanted to stay wed: “It was the mother interfering in and inserting herself into her daughter’s life.

“She came to Las Vegas, threw Jason out and got him a plane ticket home.

Despite this, a source who knows Spears told The Post: “It was not real with Jason.”

Alexander showed he still supports his ex-wife from a distance by participating in a #FreeBritney protest in August 2020 amid her 13-year conservatorship battle.

“She’s really been a prisoner,” he said on a podcast at the time, according to Newsweek.

Spears wed Federline, a backup dancer, in September of the same year her first marriage was annulled. The pair — who share matching dice tattoos on their wrists — got engaged just two months after meeting and surprised loved ones with a top-secret wedding three months after that.

“I think my mom was dumbfounded,” Spears said on the couple’s fever dream of a reality show “Britney & Kevin: Chaotic.”

The two were a constant source of public ridicule and practically fueled the tabloid industry and paparazzi machine during their relationship, with Federline’s look — Von Dutch hat, gravity-defying low-slung pants and a sleeveless undershirt — inspiring countless Halloween costumes.

They went on to welcome two sons, Sean Preston and Jayden James, but separated in November 2006, just before Spears’ tragic series of public meltdowns.

The source who knows Spears told The Post: “I think Britney did love Kevin for the moment. [He] was weirdly stable for her. It was a time of her life when she was grabbing on to something.

“I think the day they fell out of love was when she started losing it a little bit.”

Federline’s attorney added: “He wants her to be happy and believes this will be a positive step for her in a post-conservatorship era, building a healthy, happy future going forward.”

Ghalib was one of the Hollywood paparazzi who hounded Spears’ every move — until they ended up dating before her conservatorship was put into effect.

The relationship began in December 2007 just after her split with Federline, much to the dismay of those closest to Spears. Her cousin and former assistant Alli Sims told US Weekly she disapproved of British-born Ghalib.

“I only know who he is through him following us for the last eight months,” she said at the time. “I do not think Adnan is a good person; I think he only has bad intentions. He has always given me a weird feeling and creeped me out. I wish he would just go away.”

In January 2009, the star’s dad, Jamie Spears, filed for a restraining order against Ghalib and other associates; the photographer was eventually ordered to stay away from Spears and her family for three years.

Spears started dating the Hollywood agent, who worked at powerhouse agency WME and had once represented her, in April 2009. After they became engaged in 2011, a request was approved for Trawick to be in charge of the singer’s court-imposed conservatorship.

“Jamie’s thrilled,” Spears’ attorney, Geraldine Wyle, said at the time. “It’s all in the family.”

But less than a year later, Trawick resigned from the position on the same day that Spears changed talent agencies. The next day, the singer’s rep announced that the couple had ended their engagement, and TMZ reported that it was because Spears wanted more children and Trawick did not.

Last year Trawick shot down persistent rumors that they were secretly married back in 2012.

The pair began dating in 2013 and called it quits a year and a half later after rumors of his alleged infidelity, which he has adamantly denied.

Despite their rocky history, normal dude Lucado, who worked at a law firm, was a firm believer that Spears no longer needed people controlling her assets.

“If anyone knew the real Britney, they would know that she would rather be remembered for being the great mother she is rather than the artist she is,” he has said. “And if anyone could see her interactions with her kids, they would know that there is no need for a conservatorship over Britney’s personal life.”

Spears and Ebersol — the son of former NBC Sports chairman Dick Ebersol and actress Susan Saint James — reportedly shared a cozy domestic life together, with the radio producer cooking for her on their first date.

“For my birthday, we made waffles on the floor, with candles, and he bought me a real beautiful cake and a beautiful gift that I have on the wall,” she told People while they were together. “One of my favorite songs is ‘Thank U,’ by Alanis Morissette, and he put all the words to the song in a long frame. It was really thoughtful.”

The source who knows Spears told The Post: “I think Britney loved Charlie. I was shocked when they split.

“Out of all of her boyfriends, he was the most reliable.”

Asghari said it was love at first sight when he met Spears in October 2016 on the set of her “Slumber Party” music video. “I was excited that I [would] get to meet one of the biggest artists of all time,” the personal trainer told Men’s Health in July 2018. “I had butterflies.”

But when Asghari, who was born in Iran, tried to break the ice, he almost ruined his chances with the star.

Asghari has been with Spears throughout her battle to end her conservatorship.

After the release of the “Framing Britney Spears,” he bluntly stated his opinion of Jamie Spears: “Now it’s important for people to understand that I have zero respect for someone trying to control our relationship and constantly throwing obstacles our way,” he wrote in a post shared to his Instagram Stories. “In my opinion Jamie is a total dick.”

On Sept. 12, 2021, Spears broke the news on Instagram that Ashgari proposed to her with a four-carat Forever Diamonds ring engraed with the word “lioness,” his pet name for her.

The pair said they were expecting their first child in April, only to announce that Spears had miscarried in May.