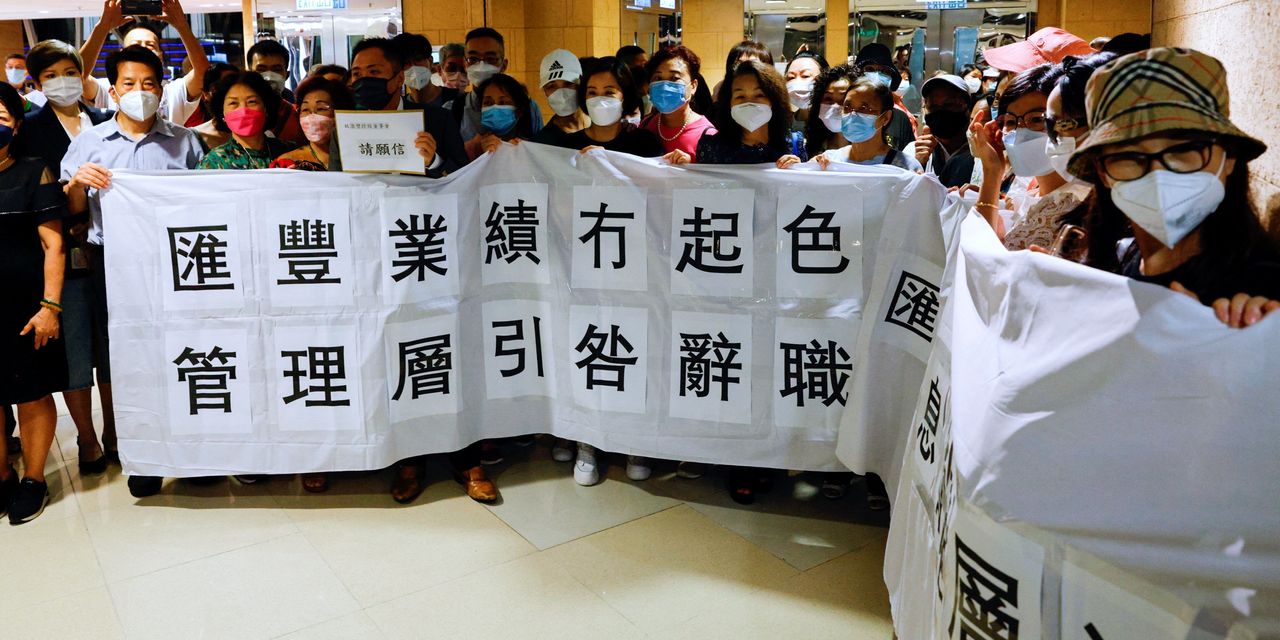 Holdings PLC met with the bank’s shareholders in Hong Kong on Tuesday and sought to convince small investors that splitting off its Asian business wouldn’t benefit them.

who had traveled from London and went through a mandatory seven-day quarantine in the Asian financial hub, joined hundreds of attendees in a large convention hall on the Kowloon waterfront, across the harbor from the British bank’s office building in downtown Central. Outside the meeting venue, people held placards and banners with messages calling for changes at HSBC, and for the bank to protect the interests of its minority shareholders.

The in-person Hong Kong shareholders meeting—HSBC’s first in three years—had been billed by the bank as an informal gathering to discuss its half-year results and the group’s strategy.

Mr. Tucker and Mr. Quinn apologized for HSBC’s temporary cancellation of its dividends in 2020, when the Bank of England told the U.K.’s biggest banks to conserve capital while the coronavirus pandemic was unfolding.

“I know that it was a significant disappointment for you and how much distress and pain it caused,” Mr. Tucker said.

Mr. Quinn said he was deeply sorry and that he fully understood how many people relied on that dividend income.

The previous day, HSBC said it planned to restore its full quarterly dividends as soon as possible, after reporting higher profit and revenue for the second quarter. The bank paid two interim dividends over the past year and announced another one on Monday, but they were less than prepandemic yearly payouts.

On Tuesday, some shareholders in Hong Kong complained about how HSBC was subject to the U.K.’s regulations and economic situation, when Asia generated most of the global bank’s pretax profit—eliciting applause from other meeting attendees.

Mr. Tucker responded by saying the dividend payouts had nothing to do with the specifics of the U.K. economy or its politics but the strength of the company. He added that the power of HSBC’s business comes from the bank’s global interconnectedness.

HSBC’s largest shareholder with a stake of more than 8%, has been pressuring the bank to consider a shake-up that would make HSBC’s Asia business less beholden to regulators in London. An even more radical proposal is to spin off the Asian business to create more shareholder value, separating it from the bank’s operations elsewhere.

Ping An has been working behind the scenes for months and has tried to garner support for its proposals, but no other big shareholders have publicly gotten on board.

Some small investors in Hong Kong are in favor of an HSBC overhaul. Christine Fong, a district-level Hong Kong politician who represents about 500 minority shareholders in the city, has argued that breaking out HSBC’s Asia operations, or moving the company’s global headquarters to Hong Kong, would help protect their interests.

Overhauling the bank, whether redomiciling the whole group or splitting it, would incur significant costs and have a negative impact on the value of HSBC’s shares and dividend stream, Mr. Quinn told shareholders Tuesday.

He said HSBC’s revenue and profits that are booked in Hong Kong come from business the bank does in Asia as well as from clients from other parts of the world. “If Hong Kong was separate from the rest of the group, the revenue in Hong Kong would decline and it could [have] a very negative impact on the profitability of Hong Kong,” Mr. Quinn said.

HSBC, ensnared by tensions between China and the West, has redoubled efforts to pivot to Asia in the last two years, shifting capital, jobs and investment to the region as it pulled back from the U.S. and Europe.

When asked by an investor about the risks of Western sanctions because of the bank’s focus on the China region, Mr. Quinn dismissed the concerns and said the bank has active dialogues with regulators around the world.

Ms. Fong on Tuesday welcomed the executives’ apology for the earlier dividend suspension but said the city’s small shareholders deserve to be compensated for the canceled payouts.

Some shareholders also derided the gift–a reusable tote bag with a smiling cat motif–that was handed out to attendees of Tuesday’s meeting, said Ms. Fong. “It’s embarrassing,” she said.

—Josh Mitchell contributed to this article.

Denial of responsibility! Elite News is an automatic aggregator of the all world’s media. In each content, the hyperlink to the primary source is specified. All trademarks belong to their rightful owners, all materials to their authors. If you are the owner of the content and do not want us to publish your materials, please contact us by email – [email protected]. The content will be deleted within 24 hours.
bankingBanking/CreditC&E Exclusion FilterC&E Industry News FilterCommercial BankingContent TypescorporateCorporate Actions
0
Share FacebookTwitterGoogle+ReddItWhatsAppPinterestEmail

Bike tours take off after COVID, as a recent trip to Portugal proved in spades