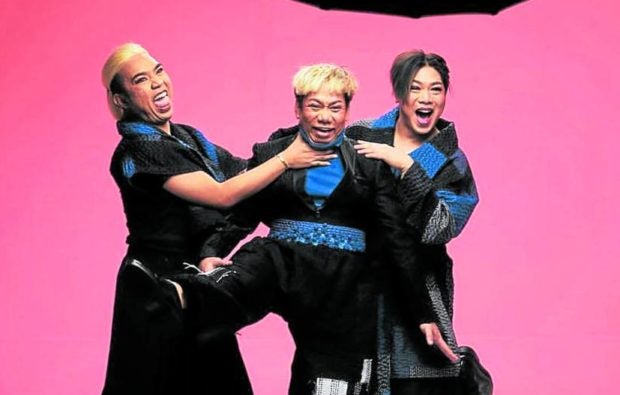 With 2.36 million subscribers and videos that consistently rake in six- to seven-figure streams, Beks Battalion—the comedic trio of Chad Kinis, MC Muah and Lassy—is one of the biggest YouTube acts to have come out during the pandemic.

But despite all the success they have been enjoying in the digital space, they still find themselves yearning for their standup comedy roots. That’s why they couldn’t contain their excitement when they were told that, after two years of vlogging, a big live show was finally in the offing.

“It has been a long while since we last performed in front of an audience. Hearing people’s laughter is something we really missed,” Lassy said at a recent press conference for their upcoming comedy concert, “Beks 2 Beks 2 Beks,” on Aug. 26 at the New Frontier Theater.

The thing Chad missed the most about doing standup is the immediate feedback and spontaneity. “Doing comedy online is difficult because you don’t hear the audience,” he pointed out. “Hearing the crowd’s laughter and applause fuel us and inspire us to come up with more jokes. You get a better feel of the atmosphere.”

But it’s not without challenges. In standup, Chad, MC and Lassy don’t get the luxury of editing. And there’s a bigger chance for jokes and bits to fall flat.

What do they do when punchlines end up being “waley”?

“Every joke can be a hit or miss, because different places and venues get different crowds. And different crowds mean different tastes. What’s funny for this crowd may not work for another,” Chad told the Inquirer. “So if your joke doesn’t work, just come up with another one. You can’t get disheartened.”

For Lassy, there’s no second-guessing yourself when you’re onstage. “Waley jokes are part of it. Sometimes, you will have doubts about your joke, but you … tough it out. Just commit to it,” he said.

Teamwork is also a crucial part of their routines. “If we sense that a particular bit isn’t working, we’re always quick to support each other,” MC said. “But sometimes, you just have to own up and make fun of your misses. And the people actually find that funny.”

A comedy bar-style standup show wouldn’t be complete without some teasing and ribbing with the fans. But no matter how lighthearted the exchanges are, some people can still feel a little touchy.

“You have to learn how to read the mood of a crowd. We know when to push for a joke and when to stop … when to be serious,” Chad said. “Just because we’re comedians doesn’t mean we don’t have a serious side, that we’re not ‘feeling’ performers. We’re not insensitive.”

“If we feel like someone got offended, we immediately change the topic,” MC added. “After our set, we approach them and apologize if they were offended in any way.”

Mounted by Viva Live, “Beks 2 Beks 2 Beks” will merge comedy, music and dance. Chad, MC and Lassy are expected to deliver fresh material and sketches, which they themselves wrote and conceptualized. (Call TicketNet at 8911-5555.)

“We really prepared for this show. While we frequently put out vlogs, there are still concepts we haven’t shown yet. So if there’s an idea and joke we feel are better-suited to a live setting, we keep them in our vault. And we just wait for the right time and setting to release them,” Chad said.

Making the event more special, MC said, is the presence of their friend Vice Ganda, whom the three also look up to as a mentor.

“He asked us if we wanted him to appear as a guest or just as a spectator. And we said we would love to have him onstage. He agreed, no questions asked. Let’s support each other, he told us,” MC said, adding that the biggest lesson they have learned from Vice is the value of saving money and discipline.

“Even before Vice got famous, he already had savings,” MC said. “He doesn’t go to work if he’s not in the right headspace to make people laugh. He always got his outfits planned from head to toe. He’s one of the most disciplined people I know.”